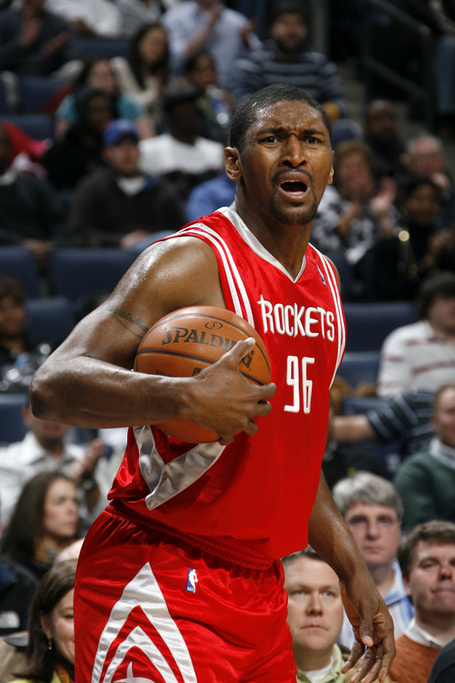 Well, dammit.  So much for The Streak Part 2.  Maybe we can go for "Return of the Streak" against Minnesota?  It would be nice, but if there is any word that you simply cannot associate the Rockets with, it is "consistency."  We have none.  On some nights, we'll see the good Rockets, and others, we'll just shake our heads in confusion.  The opponent doesn't even matter sometimes.  However, tonight was not quite as bad as others, for a number of reasons:

But with that said, we can't keep losing to bottom-feeders.  I'm so sick of it.  But whatever.  Dude, where's my recap?

Tracy McGrady -- T-Mac was going to the rack in full force tonight.  And when he wasn't getting in the paint, he was taking good, set jump shots.  This was one of the more fundamentally sound games I've seen Tracy play in a while.  Everything he did made sense, to some degree.  Final statline: 21/5/5 and zero turnovers.

Yao Ming -- Despite coming down with the flu, Yao hustled his ass off tonight and carried us back in the fourth quarter.  He was once again perfect from the free throw line, and he also blocked 3 shots to go with a 20/9 night.  Yao still needs to step up better on pick and rolls, because that's where Conley and Mayo were killing us, but otherwise, he had a very solid game.  If only we could have hit some threes at the end to reward his efforts...

OJ Mayo -- I don't usually give an 'up' to the opponent, but OJ played a hell of a game tonight, scoring 32 points.  In my mind, he's David West in a guard's body.  He's got a phenomenal jump shot, he takes the shortest route to get from Point A to Point B, he is mature beyond his years on the court, and he makes up for his lack of size with his ability to create space for himself by using his thick build.  There were a lot of questions about OJ's ability to play against NBA competition; so far, he's answered all of them.

Ron Artest -- Too much isolation for Ron tonight.  When he's at his best, Ron is able to take advantage of a double team by passing the ball to the open man.  For some reason, on this night, Ron tried to force up a bunch of shots in traffic.  And once again, I must make this point: Artest needs to shoot in rhythm.  He'll catch a pass, pause for a second, and then throw up a shot once the defender recovers.

Carl Landry -- Hakim Warrick killed us tonight (as one particularly bright reader predicted), and Landry didn't do much to slow him down.  He picked up 5 fouls in 14 minutes, didn't do anything offensively, and was unable to give our bigs some rest.  Hakim might be one of the worst matchups for Carl, as the two are practically the same player, only Warrick is a few inches taller.

Chuck Hayes's DNP -- I think Chuck could have done some good tonight.  He would have surely limited Warrick to some degree.  I just don't see the point in leaving him on the bench against a team like Memphis.

Stretch Run Shooting: 8 of our last 12 shots were threes.  While many of them were open shots, why go away from Yao?  We had a chance to win the game, and we blew it.

Next Game: Saturday night vs. Minnesota.  Let's have another...um, another rebound game (yawwnnn).