Word of the day: "Heat Check"

Share All sharing options for: Word of the day: "Heat Check"

Today's word of the day brought to you (indirectly) by Bill Worrell: 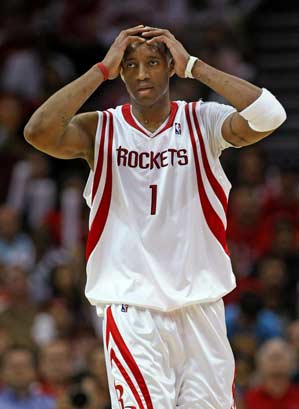 n.  1.  A crazy, usually long-distance, shot attempt taken after making 2-3 consecutive shots in a short amount of time.  2.  A shot that has no chance in hell of going in the basket.  3.  A shot that would make JVG cry if he were your coach.

Ex. 2 - Shots forced by Ron Artest during a cold-shooting night.  The word is always plural in this instance.

Ex. 3 - Any attempt by Chuck Hayes to shoot the ball farther than 6" away from the rim.

This term of art has caught on in the basketball vernacular over the last ten years or so.  Isiah Thomas used to refer to it as a "kill shot" but since no one wants anything to do with Isiah, his term never caught on.

Last night Bill Worrell said Rafer was taking a "heat check" shot on a 3 point attempt in transition.  It was a nice way of saying "why the f--k did you shoot that, Rafer?  You know you can't make that shot!"  Worrell also used the same terminology following a Tracy McGrady 28 ft. attempt with 20 seconds on the shot clock during the Chicago game.  Not to ruin the suspense if you DVRd these games, but neither of the attempts would be deemed "successful" -- nor would they qualify as anything close to a proper execution of an offensive set.

Seriously, unless your name is Kobe Bryant (and... it isn't)... after you've made a couple of good shots in a row, keep a level head and realize that shooting from 30 feet away with two defenders on you when you have no teammates to rebound...... well, that just may not be the best idea.  No matter how much you are feeling it or believe to be in The Zone.  Someone truly in The Zone would just go make a simple layup.  (note:  the above advice does not apply to those name "Alston, Rafer".)

edit:  I would have used a picture of Rafer instead, but apparently he's not very photogenic when he's taking jumpshots and Google Images was of no help.