Coach Sleepy is a fan of us. Or so it appears.

Share All sharing options for: Coach Sleepy is a fan of us. Or so it appears.

From today's Chron... it looks like we have a fan!

A year ago, when the Rockets got on a roll, Adelman pointed toward the chance of sweeping February. This season, he began the month calling for the sort of run that would make the Rockets a more solid playoff team and more.

"We have been stressing it," he said. "I think the whole month of February is really crucial for us to try to make some kind of move here. I think it’s important that these guys understand that we haven’t established ourselves yet.

"I just thought the way the schedule broke, the end of January and February were going to be really, really big for us. We could make a move, or we could stay where we are, going back and forth. If you stay where you are, someone could get hot or you could hit more injuries and suddenly, you’re on the outside looking in."

I mean, come on -- I never saw anything in print in the last two years that predicted or suggested the mere concept of the Rockets "sweeping February."  Oh, wait, there was one place -- this very blog! 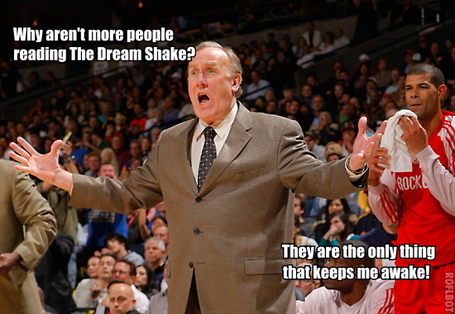