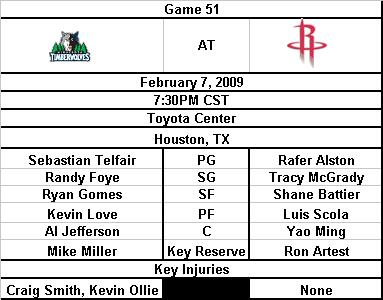 Alston - So if I told you at the beginning of the season that Rafer would have the worst statistical year of his career since he became an NBA starter you would jump off a building, right? Well, there's a lot of those downtown near the stadium
vs.
Telfair - No idea how this guy is still in the NBA, much less starting
Edge: Even

Shooting Guard
McGrady - Has played infinitely better in the first 3 quarters of games. Now we just have to get him to remember that Yao is the closer, and that it is never, ever a good idea for him to shoot from more than 5 feet with less than 2 minutes remaining in the game.
vs.
Foye - No joke, they wanted him over Brandon Roy. Seriously...
Edge: Rockets
Small Forward
Battier - It looks like Adelman is going to do the right thing here and start Battier from now on with Artest coming off the bench. Now he just has to figure out how to get Ron to realize that if his shot isn't going in, just stop shooting and get 9 steals instead.
vs.
Gomes - Solid yet unspectacular player. He's the kind of guy you're glad to have on your team, but in no way do you want him starting night in and night out
Edge: Rockets

Power Forward
Scola - Easily my second favorite Rocket. Why don't I own his jersey? Because Dave beat me to it. I might have to get one anyway. Of all the things we complain about, Luis Scola is never one of them. NEVER
vs.
Love - Probably the least I've liked a rookie since Christian Laetner. Now I don't hate Love, I just think he is what he is and is going to be that forever. And, while that's a fine player, you're crazy if you think it's a good idea to trade OJ Mayo for him.
Edge: Rockets

Center
Yao - 7-11, perfect from the free throw line, sick off his ass, yet playing hard. What's that? It's NOT a good idea to go away and shoot 80% of your last 15 or so shots from 3? Really? You'd think a coach might come in handy there...
vs.
Jefferson - I say it every time, but he's the only player in the league at center that actually can AND does play Yao pretty evenly every time out. It's utterly ridiculous that Shaq made the All Star team over him.
Edge: Rockets, but as close to even as you'll see all year at C

Houston Rockets
OUT - None

Minnesota Timberwolves
OUT - Likely Craig Smith and Kevin Ollie. While I like Smith, this give's Kevin Love the opportunity to start. And while I don't really care for Love, he's better in the NBA than Smith.


My Prediction: No more until game 60, I just can't take it.