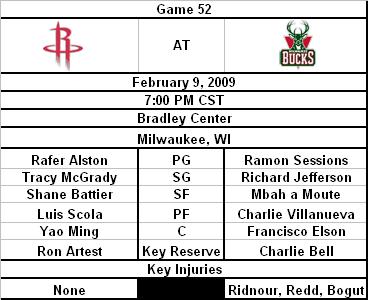 Point Guard
Alston - I like that he talked and then came out with a good game, unlike when he normally talks and then does all of the things he just bitched about. Maybe he will turn the corner and play consistently like he did in February last year.
vs.
Sessions - He has a ton of potential, but don't let that 44 point game fool you, he's not Derrick Rose
Edge: Even

Shooting Guard
McGrady - Just shut up, stop grimacing and play, that's all I want from you.
vs.
Mbah a Moute - Decent player with some potential. I haven't seen him play this season, but I liked his game at UCLA, while not NBA star ready, he did seem like he could play with the big boys. More of a role player but has been forced into the starters role with so many players out.
Edge: Rockets

Small Forward
Battier - Not shooting much because he clearly doesn't feel comfortable doing that right now. But the rest of his game has picked up. He's good for a few timely assists, a blocked shot and a steal or two every night to go along with 5 or 6 rebounds of late.
vs.
Jefferson - With Redd out, the team is very poorly put together, and it wasn't really well put together before that. Jefferson is clearly the best player, but that's not saying much anymore.
Edge: Bucks

Power Forward
Scola - Tough shooting game last time out, but still grabbed 10 rebounds. He more often than not bounces back very well after a bad shooting night. He will also frustrate Villanueva all night long on the defensive end. Am I the only one noticing how much that has improved for him since last year?
vs.
Villanueva - Scoring like he always should been doing. I think Scott Skiles finally understands what he has in Villanueva, not sure why it took so long.
Edge: Rockets

Center
Yao - If you don't see a big game coming from Yao tonight, you need to open your eyes. There is no way on earth that Francisco Elson can guard him.
vs.
Elson - Cannot hang with Yao, period
Edge: Rockets


My Prediction: Seriously, look at who is out for the Bucks. We should destroy that team with those guys in there.