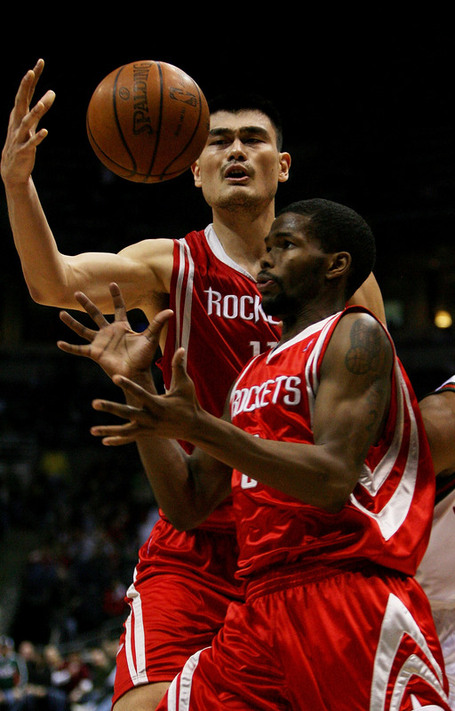 The Rockets weren't quite sure what to do Monday night in Milwaukee, as they lost to yet another lottery team, 124-112.

Teams can get hot.  It happens.

But 98 points through three quarters?!?! 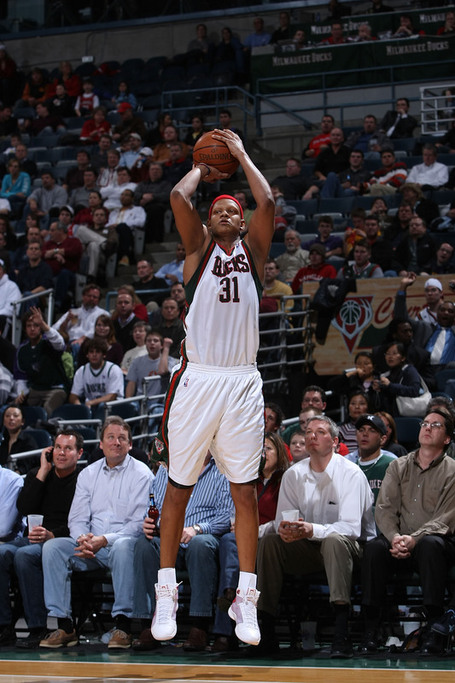 Yes, Bill Worrell, we may have played "hard," as long as we applies to Ron Artest and Luis Scola.  So what went wrong?

Throughout every bad defensive game for the Rockets this season, which includes tonight, there has been one constant: zero help defense.  Once and opposing player drives and gets by his man, that's it.  We might as well hoist him up on our shoulders and let him dunk it like a dad does with his 5 year old.  It's embarassing.  And if the defensive slide comes, the second slide doesn't take place, so there is a wide open layup attempt or offensive rebound waiting to happen.

Is this a matter of softness?  Maybe.  Aside from Ron, we have a very non-physical team.  As much as Luis and Landry work the offensive boards, they don't play physical defense at all.  Tracy doesn't have the ability to play physical defense anymore, and Shane Battier can only guard one guy at a time.  If Ron has an equal peer on the defensive side of the ball, it is Chuck Hayes.  But Chuck gives us so little on the offensive end that he can only play a limited number of minutes per game.

Is it just bad coaching?  Perhaps.  We've been hard on Rick Adelman of late, but this may be something that he isn't quite used to.  It is true that Rick's Sacramento teams always finished in the top ten in defensive efficiency, but maybe he just had some really smart defenders.  Tough to label Chris Webber as a "smart defender," but the statistics don't lie.  And we all know that Vlade Divac could flop at any time, anywhere.  Rick may not have taught much defense in Sacramento because he may not have had to. 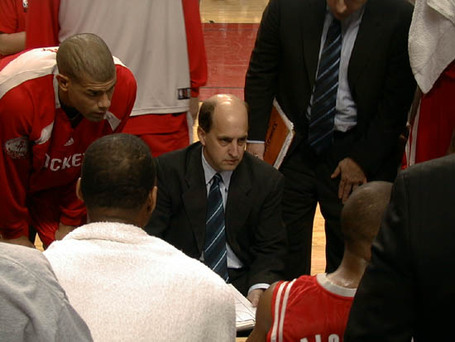 On the other hand, Jeff Van Gundy preached defense in Houston.  He made it the number one priority, and everyone bought into it.  They entered every game with a defensive mindset.  Under Adelman, it seems that everything is about the offense, all of the problems or successes.  Not much has been focused on the defense, and it's time that Rick set his mystic offense aside and take his turn at defense.  Maybe not to the level that JVG did, but at least to some degree.

Aside from all that, the Bucks were "hot."  They shot 55% percent from the field.  As for our guys...well, we were not hot.  We were quite cold, at least from the field.  Quickly, there are two statistics that stand out to me about this game:

People say the Rockets are a good team that plays down to its competition.  In my book, good teams not only win the big games, but also win against the bad opponents.  So, according to my standards, we aren't very good right now.  Let's just get this recap over with, so we can go home, get even angrier at each other, start a huge locker room fight, and then get bought by Jerry Jones.

Luis Scola -- 20 points from My Friend From Argentina, including a 6-6 free throw jamboree.  Wonderful stuff.

Ron Artest -- Ron played hard.  Real hard.  And he played well: 6-11 from the field, 4-5 from three, and 4-4 from the free throw line.  He was hustling everywhere, and it's amazing to me how the guy who is new to a team out-hustles everyone.  While T-Mac and Yao sulked, Ron played.  Simple as that.

That's all we need to know.  Besides his 1-9 shooting performance.  That was grand as well.

Rafer Alston -- 2-8 from the field, 4 turnovers, -25 plus/minus: sounds like another night at the office for Rafer.  I'm not even mad at him tonight.  It's this new thing called "acceptance."  Actually, screw that, he really sucked.

Yao Ming -- I hate to do it.  I really do, but he went 2-8 and didn't do anything.  Sure, maybe the refs had something to do with his lack of minutes, but he's overcome that before.  I don't know if a big game from Yao would have made a difference, but the fact that he didn't do very much at all puts him on this list.  Sorry, buddy.

Reference the two statistics above.

Terrible Dunk Attempt of the Night:

Next Game: Wednesday vs. Sacramento.  Dammit, another sub-.500 team?  Why can't we play the Celtics in Boston every night?