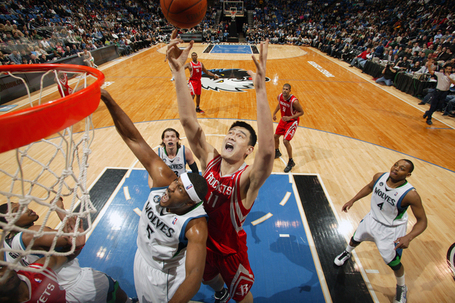 Our defense wasn't there tonight, at least not in the first half.  The Wolves were shooting it lights out, and when we finally started contesting shots, the rims began to ring.  On the offensive side, we shot the ball well and did a good job getting into the paint.  But let's face it - Marge Gunderson could have put together a better defensive scheme.

Why can't we perform like this every night against bad teams?  Seems to me like our only success has come in the Twin Cities, where we are 2-0.  If we are going to make a playoff run, we HAVE to beat the Griffin Candidates.  Our March schedule is way too difficult to let any more "should-win" games slide.  No more Lundergaardian slips. 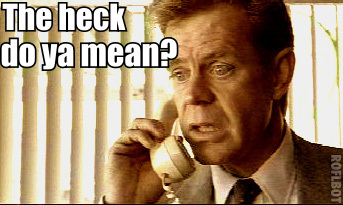 Aaron Brooks -- Nice to see a bounce-back game from Brooks.  The ten assists must be a special "sorry about last night" gift as well - we never see him dishing it out that often.  Hopefully it continues.  The shot attempts need to go down, though.  Seventeen from ABZ compared to Yao's seven is much too Rafer-esque.

Ron Artest -- Thankfully, tonight's game didn't come down to the final minutes, when Artest shoots it terribly.  Otherwise, he has been on fire of late.  23 points on 15 shots is very efficient, and his defense on, um, Ryan Gomes...well that was nice too.

Carl Landry -- Welcome back, Carl.  12 points in 25 minutes is pleasing to the eyes.  Do it again against Toronto on Tuesday.  Thanks.

Yao Ming -- It wasn't really his fault that he only took seven shots, as we didn't need to get him the ball that often.  But on any night, against any team, seven shots isn't enough.  If you've got the ball against a 6'7 center, shoot it.  A lot.

Von Wafer -- Wait...are you sure he played tonight?

Minnesota Starting Lineup -- I don't mean to bash Minnesota like this, but Al Jefferson's absence makes them look, well, terrible.  Foye/Ollie/Collins/Gomes/Love isn't exactly intimidating.  I will give them credit for playing a good first half - they made the most of their talent.

Bullard: You know what's funny, Bill? Do you remember Will Perdue?  Yeah, well, he didn't go to Purdue.

Worrell: Neither did Biff Perdue, my golfing partner.

Tonight's phantom call may have been the worst all season.  Craig Smith was posting up Scola on the block.  The Timberwolves' Brian Cardinal receives the ball at the top of the key, and then tries to throw a quick bounce pass into the post.  Smith lunges forward for the ball, misses it, and suddenly, a whistle is blown.  Scola, having stood straight up, playing lousy post defense, is called for a foul.  The replay indicates that Scola used his right index finger to scrape Smith's jersey.  But the refs see differently.  Phantom Call: Pushing.

Playbook: How Yao can beat the post-frontal defense:

1. Yao posts up and gets fronted.  Ball goes from the top of the key to the wing.

2. Wing player moves the ball back up to the top of the key.

This won't work every time if the defense collapses in the lane, but it can be effective if used at the right time.

Next Game: Tuesday vs. Toronto.  Let's do better than last time around.