Share All sharing options for: Recap: Rockets overcome free-throw follies in Denver, hold on for 97-95 win 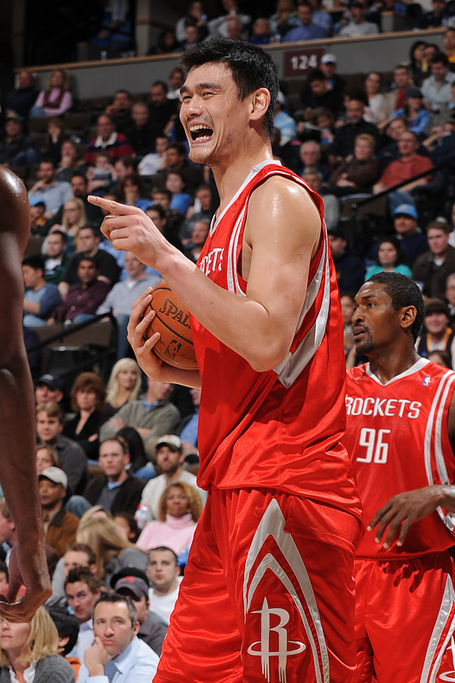 Fortunately, Yao Ming and the Rockets had the last laugh, despite blowing a 19-point lead.

I'm not sure what to make of this one.  I turned off my TV with one those "Well...I guess we won"  feelings.  Then I noticed that Los Angeles and New Orleans both lost and immediately felt much better.  But I still don't really know about this game.  Maybe it will grow on me as I think more about it.

Let's pretend I have multi-personality disorder for a second.  It will help me sort out the positves from the negatives...in some weird, screwed up way:

But we built a brickhouse from the free throw line.

The win gives us a tie-breaker for homecourt advantage in the playoffs...

But we blew a nineteen-point lead.  What the hell.

Think of how tired we were, especially with the altitude change...

I don't care how tired we were -- Yao nearly blew the game with that horrendous foul.

Shot well?  Did you see him go 1-5 down the stretch?  He tried to score OVER Nene.

Nate Robinson thinks you're hilarious.  Not.

Hey, how about his five turnovers and 4 points? Chuck Hayes could do that easily...especially the 5 turnovers.

We held a ridiculous offense to 95 points.  You can't possibly refute that...

They scored 33 points in the fourth quarter.  We gave up 28 to Billups.  Even Birdman scored.

Everyone in the NBA can score at least one point, buddy...

Go look at Chuck's box score.  Go ahead, take a peek.  What does that say?  Huh?  What's that?  BIRDMAN OUTSCORED THE CHUCKWAGON.

That's not exactly the defining matchup of the game.  You're really pushing it now...

Wait, just let me think of something.  Uh...we shot 57% from the free throw line!

You said that, dumbass...

Two of them were from half court.  Are you done yet?

They're down by thirty.  You're done.

You know, that actually helped somewhat.  My mind is much clearer now - this was a good win for us. 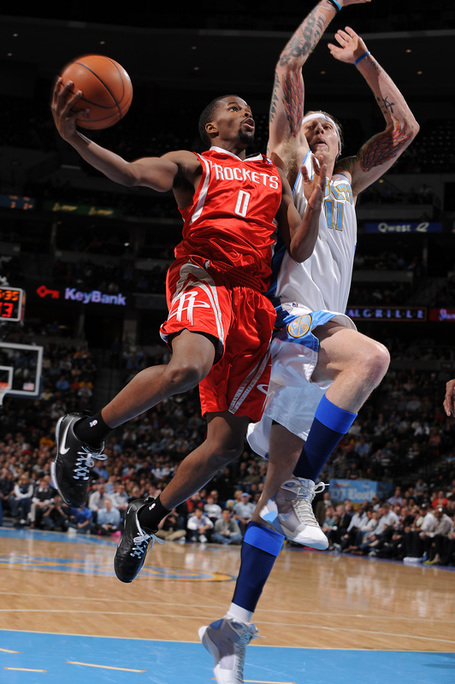 Ron Artest -- Despite shooting erratically in the fourth quarter, Ron continued to shoot well from behind the three point line and did an excellent job on Carmelo Anthony, minus one defensive lapse that resulted in a Melo three-ball.  22/6/4 are numbers that fans have come to be quite satisfied and familiar with.

Aaron Brooks -- I ragged on him earlier, but Aaron did make a clutch layup around Nene, and he hit a few three-pointers from (as Matt Bullard noted) Loveland, Colorado.  His defense on Chauncey wasn't as good as it was in Houston, but he can only do so much against one of the strongest point guards in the league.

Carl Landry -- Carl had a huge game tonight, hitting about four open jumpers, allowing us to have an answer for Denver's double-team on Luis Scola when Yao would go to the bench.  He's been playing great of late, and if Scola were to ever go down, Landry would be more than ready to step in at the 4.

Chuck Hayes -- Save of The Year.  I never thought he was that athletic.

Yao Ming -- Decent game overall, but that idiotic foul gets him a spot here.  I still can't believe he did that.

Von Wafer -- He did hit a big jump shot in the fourth, but his free-throw shooting really hurt tonight.

Annoying Kid That Yells During Free Throws -- Dude, your voice sounds like the monster from "Jeepers Creepers."  In brief retrospect, that was a terrible insult.  But seriously, I couldn't stand hearing him scream much longer.  Unfortunately, it worked.

Stat of the Night:

It's not my decision to keep running this feature, though I like it very much.  The refs just keep screwing him.  Tonight's call reminded me of the terrible affair we had in Utah a year or two ago.  I can't find the video, but it's when Scola boxed out for a rebound, and was brought down to the ground by two Jazz players, only to be called for the foul.  This instance was no different.  While boxing out Linas Kleiza, Scola tripped over Nene's foot, and was losing his balance when Kleiza somehow "became attached" to Scola's jersey and fell to the ground as well.  Luis picked up his fifth foul on this play, and he fouled out of the game about twenty seconds later.  Phantom Call: Holding.

Next Game: Wednesday vs. the Lakers.  I'm a believer.