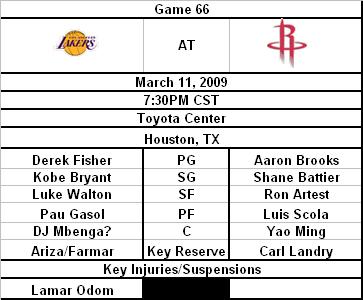 Point Guard
Brooks - Who agrees with me?  His defense against Billups was actually pretty solid.
vs.
Fisher - He is basically Rafer Alston with a slightly better shot these days.  Derek Fisher of 3-5 years ago was not that player, but he is now.
Edge: Even

Shooting Guard
Battier - Clearly hurting.  He's measuring every shot and pushing it.  I've seen 10 year olds with a smoother shooting motion than he's had as of late.  His foot has to be killing him.  He's still staying with guys and shutting them down, just ask JR Smith.
vs.
Bryant - Still better than Lebron, sorry, just true.  Next year I don't think he will be and he knows it.  So this is his year to shine and I think he is doing his best to coast whenever he can during the regular season.  His stats are down across the board from the last 4 years, I think that spells bad news for everyone else in the playoffs when he turns it on.
Edge: Lakers - Come on, no one is that big of a homer

Small Forward
Artest - It's been really interesting, every game since the All Star break he has a couple of posessions where he is a total ball stopper, then he seems to realize he doesn't have to do that.  I'm hoping those posessions stop completely and he moves on to completely trusting the team.  I think he's on his way and that is a very good thing.
vs.
Walton - Is he a no stats all star too?  Because he is getting a ton of minutes and is averaging 4.8 PPG 2.6 RPG and 1.2 steals.
Edge: Rockets

Power Forward
Scola - Really tough offensive game on the back end of the back to back.  I expect him to bounce back strongly on the offensive end.
vs.
Gasol - Good player, clearly benefiting from playing with Kobe taking the pressure off of him.  He's a really good shooter and an even better flopper/whiner.
Edge: Rockets - Just watch, Scola will win this matchup

Center
Yao - I expect him to come back after such a silly mistake and dominate.  He's just that kind of guy.
vs.
Mbenga - I'm assuming he's playing here and that Lamar Odom rightfully gets suspended for being an idiot.  How exactly can you defend what Ariza did?  Is it obvious that I have nothing to say about DJ Mbenga?  He's basically a taller Joey Dorsey
Edge: Rockets - It can literally be any player on the Lakers, they can't match Yao

Injuries/Suspensions
Houston Rockets
OUT - None
Los Angeles Lakers
OUT - Lamar Odom on suspension.  Ariza should be out too, but the league doesn't do anything it doesn't have to do to the Lakers

My Prediction: The Rockets get it done.  I even think they'll have a healthy lead midway through the 4th.