Recap: Lakers ride Bryant down the stretch, down Rockets 102-96

Share All sharing options for: Recap: Lakers ride Bryant down the stretch, down Rockets 102-96 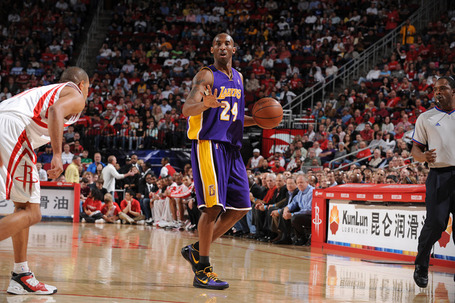 Led by Kobe Bryant's 31 second-half points, the L.A. Lakers were able to steal a win in Toyota Center.

Ron Artest screwed up tonight.  He chose to pick a bone with the best player in the world, and as usual, the best player won.  Normally I appreciate Ron's passion and will to win.  But his passion was misplaced tonight.  His focus was squarely placed on the "Ron versus Kobe" matchup, as opposed to the Rockets versus Lakers matchup.  And I think it cost his team the game tonight.  Many of his shots or reckless drive attempts down the stretch were merely responses to what Kobe had done on the other end of the floor.  Ron was playing streetball, when it was anything but.  Our All-World center, Yao Ming, returned to the game late in the fourth having shot 7-8 from the floor, and on the next two possessions, Artest missed a three and tried to drive through three defenders, unsuccessfully.  Remember those Gatorade commercials, the "anything you can do, I can do better?" ads?  Ron had that song playing in his head the entire night.  Kobe just played his game, and his game is much better than Ron's game. 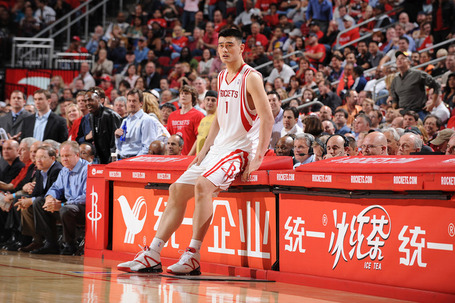 Speaking of Yao...what the hell?  Nine shots?  And the same goes for Scola; he took nine shots, only missed two.  Where did our post game go in the second half?  Oh - I know.  We shot 28 three pointers.  And we only made five.  Credit the Lakers for playing much better post defense in the second half, but for a team that is without its star center to hold two opposing post players to two or three shot attempts is ludicrous.  Rick Adelman's a basketball genius; surely he could have come up with some clever way to get the ball to Yao and Luis.  It didn't even look like he made an attempt.  This angers me.  So the Lakers made a few quick stops in the post when the third quarter began - so what!?  You don't just ABANDON the post like Moses.  Our best player was, in all ways, absent in the second half; we can't win like that.  The only reason the game was even close down the stretch was because of Von Wafer's stellar play.  Aside from that, the Rockets blew it.

Speaking of shot attempts...we didn't explore that area very much.  We shot 51% from the field, but on only 70 shot attempts (we took 76, but six of those were uncontested layups/prayers at the end).  Part of this can be explained by our 23 turnovers.  Every player on the team, aside from Carl Landry, who played magnificently, had at least two turnovers.  Half of that was good defense by the Lakers, but half of that was just bad decision making.  Ron's 6 turnovers were killer, and Yao and Von Wafer each had 4.  You can't do that and expect to win a game.  It not only gives the other team the ball, but also eliminates an opportunity to score, thus explaining our low number of shot attempts.

The referees were pretty atrocious, but what else can you expect when you play L.A.?  I really can't expand on that note, simply because we have all come to accept the fact that when a referee is deciding whom to call a foul on, the call will always favor Kobe Bryant.

While we collapsed in the second half, our first half was excellent.  The effort and determination was evident.  We were moving the ball quickly, back-cutting to the basket, and getting out on the break.  In other words, we did what the Lakers did to us in the second half.  Kyle Lowry was an absolute spark for us in the second quarter, as was Von Wafer.  If only we had been able to keep up the ball movement...and yet, you had to expect some sort of change after the Lakers gave up a billion points in the paint.

Huddle up for the recap: 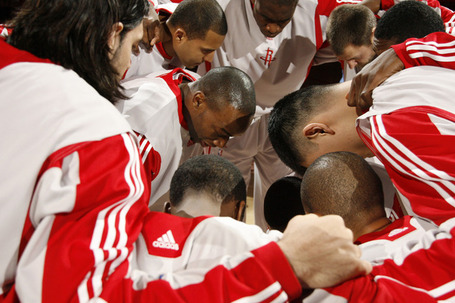 Luis Landry -- The power forward duo combined for 25 points and 17 rebounds in some hard-fought minutes of work.  I was especially impressed by Landry's performance - he was aggressive around the rim, grabbing two offensive rebounds and having multiple dunks or layups.  Scola was Scola, going 15/9.  It would have been nice to see him get some more shot attempts, but played very well otherwise.

Von Wafer -- Baron Von Wafer was the reason we were in this game at the end.  He's our Laker killer (went for 23 against them last time), and his hot shooting down the stretch kept us in the game and gave our other guys a chance to step up.  He had 3 steals as well, and his emphatic breakaway dunk, his game-tying three pointer and two key jump shots really got the crowd into the game.  Unfortunately, we didn't finish it off for him.

Aaron Brooks -- Aaron played a fine game up until the fourth quarter, when he sat out for a good portion of its beginning.  And then he came onto the floor and hit the most clutch three-pointer of his career, sinking one over Derek Fisher while being fouled in the process.  Aaron's overall numbers don't stand out, but that shot was incredible.

Ron Artest -- Ron went Crazy Pills tonight, and it wasn't a good thing.  Here comes a Stu Scott impression: "Can a brotha get a jump shot?  Dude went 4/16 from the field, and 0-8 from three point land."  Or how about when he tried to go for that steal against Kobe?  You know, the time when Kobe beat Ron to the ball and nailed a wide open three?  "Wha.  Wha-wha happened...  And then: boo-ya!  Kobe makes Artest pay with a three!  Holla at a playa when you yada yada yada."  In all seriousness, this was not a good game at all for Ron, and he should have recognized that before trying to take over in the fourth.  We saw way too much of this: 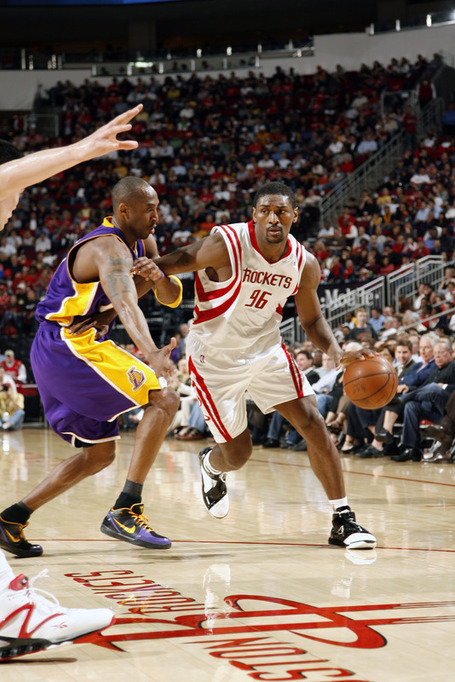 Shane Battier -- He had about three wide-open looks from three tonight and missed all of them.  Thus, he was taken out of the game in favor of Artest, who Kobe torched for 37 points.  We could have used his defense tonight, but he shot himself out of the lineup.

Yao Ming -- Yes, he shot well, but he didn't do it enough.  He got pounded on the glass in the third quarter and gave up about 4 straight offensive rebounds, all of which turned into points.  And his inability to overcome the double-team was a huge blow to our offensive rhythm.  He needs to shoot the ball more and figure out how to find some space to get a shot off.  I mean, he hasn't taken 20 or more shots in a game since late December!

The Worst Call of All Time of the Night:

Kobe Bryant drove baseline in the second quarter and rose up for a wide-open dunk...which he missed.  Unfortunately for the Rockets, the Lakerees were on the spot to blow a whistle on Carl Landry.  That's right - the refs called a foul on Kobe because his foot brushed Landry's shoulder as he was jumping over/around him.  Landry was, of course, dumbfounded.  It was the worst bailout call I have ever seen, even for Kobe.

Utah Jazz Moment of the Night:

Some Jazz fan was wearing his Jazz shirt in the club section.  Which would have made sense had Utah not been playing in Atlanta tonight.  What a douchebag.  We'll send Clutch to the next SLC game so he can pie someone in the face.

Next Game: Friday @ Charlotte.  We badly need to win this game.