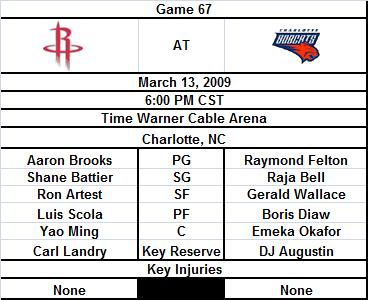 Brooks/Lowry - The Rockets really needed Lowry and Brooks to step up a little more in the Lakers game.  Neither had what you would call a bad game, but they didn't exactly light it up either.

Felton/Augustin - They basically split the minutes and while Felton is the better scorer, Augustin is the better pure point guard.  Felton has been on fire as of late however and it has caused DJs minutes to go down.

Edge: Even? - Neither team's point guards are fully developed and it's just a toss up right now

Battier - Hurting again and it's obvious.  He really needs to sit out and rest in my opinion, but from Shane's mouth , the doctors don't think he can injure it worse, it's just very painful to play on his foot.  His defense has still been very good, but his offense has suffered.  That's okay for now, but he needs to be hitting his threes by playoff time or the Rockets could be in for a world of hurt.

Bell - I just don't like him.  I think he's a pompous, words not appropriate for kids.  Maybe he has to be because he's from a small place(St. Croix) and small school (Fl Intl) and had to get noticed, it's over though, you got noticed, you're extremely talented.  We get it already.

Artest - 0-8 did in the Rockets on Wednesday.  I don't know what is up with Ron, he's usually not off, but when he is, it is epic.  And no, I don't think the loss was solely his fault, it was a combination of things, but he has to change his game when the three isn't dropping.  He's too good of a passer to not do it.

Diaw - Yet another player traded from the Suns who makes no sense.  Diaw is a good player but his contract is ridiculous.  There is no way he should be making 9 million dollars a year.

Edge: Even - They are both all out hustle, make the most from what you have kind of guys.  Wallace is clearly the better athlete and Scola is clearly the better skill player, but they both bring everything you could want from a third guy.  The problem for Charlotte is that he's arguably their number one.

Yao - Doesn't get enough shots.  I've blamed it on the team for a long time and while it is absolutely true that they cannot get passes to him, Yao has gotten a bit lazy on the seal.  I don't know if he's tired or he just knows he won't be getting the pass in the right place anyway, but it has to stop.  He's bigger and stronger than all but 2 players in the league (Shaq and DHo are both stronger), so there is no excuse.  Come on Yao, let's get it together.

Okafor - I like him, good Houston guy, but he's making 9.5 million dollars to get 14 points and 10 rebounds on a bad team.  Yes, they are young, but he has the physical ability to do more than this.  Or at least I thought he did coming out of college.

Edge: Rockets - Okafor is exactly the type of center that Yao eats for dinner

My Prediction: Rockets win and they win big.  This will be a statement game after losing to the Lakers