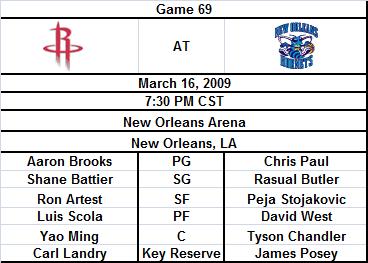 My wife and I will be at the game and I'm really looking forward to it.  I haven't been to New Orleans since before Hurricane Katrina.  That's more of a coincidence of my two boys being born than anything else, since I love going to NO.  We'll spend Sunday and Monday there going to a few of my favorite spots.  Then Monday night, a little Rockets vs. Hornets action.  I'm looking for a great game and oddly enough will see Chris Paul in person for only the second time.  Should be interesting seeing how the New Orleans fans act towards this team in person.  I'm very much looking forward to it and have been since I bought the tickets in October.  As of right now, I have a free ticket just send me an email at leegrammier@gmail.com if you are interested.  It's open to a Hornets fan or a Rockets fan.  I'm putting this preview up now because I likely won't have much computer based internet access until Tuesday.

Point Guard
Brooks - His shot count has become obscene at times, but honestly, he's really doing a good job.  Not a great job, but a good job because he has been able to stay pace on the offense end with the points he's giving up on the defensive end most nights.  That said, he's playing with the starters like he thinks he's still with the second team.  Maybe that's what needs to happen.  It would be a really good team decision if Aaron's pride could handle it.  And it would be a great move for him.  I think he's up for it, but I'm not sure if we'll see it soon enough.
vs.
Paul - If I started a team today, the only player I would even think about starting a team over him with is Kevin Durant, and that's because I know what Durant is going to become.  I would choose CP3 100 times out of 100 over Lebron to start a team with because he makes every single player on the court better, and when they don't oblige, he can take over a game.  I like that he's a team first player, it's a thing of beauty to watch.  I truly believe that when it is all said and done that people will argue whether he or Magic is the best point guard in history.  At this point, I can see him getting to number one in my mind.  And he hasn't even won his first championship yet.  I just hope that New Orleans is able to see it.
Edge: Rockets

Battier - Why didn't the Rockets hide their PG on defense and let Shane come over and guard Parker?
vs.
Butler - Basically what I would expect from Von Wafer if he was the Rockets starter stats wise.  Big games on occasion and he can put a spurt together, but clearly the worst player in the starting line-up.
Edge: Rockets

Artest - He has to stop being a chucker, it's borderlining insanity.  Shooting the ball is fine, but get it in rhythm and get it in the offense.  If you are missing your shot, take a break, be the great passer that you are.  Please?
vs.
Stojakovic - He's been out for 5 games, but the Rockets prior to last year were the kings of people coming back to play them, and I can see it happening here.  Either way, doesn't change the
Edge: Rockets

Power Forward
Scola - He's been the answer to the Rockets third player prayers since McGrady went down.  Scola has even closed the gap at PF between these two teams despite David West playing even better this year.
vs.
West - West is an all star, it can be said that he's my second favorite non-Rocket.  My liking of him is unhealthy.  He's picked his game up yet again this year and I really think he's going to catch fire in the play-offs.
Edge: Hornets

Center
Yao - He has dominated Chandler from day 1, and it's not going to change.  If the Hornets try their normal one on one defense on him then Yao will have a huge night.
vs.
Chandler - The king of the alley oop.  Chris Paul has made him an actual NBA player with his passing, increasing people's view of him by about 40%.  He better thank his lucky stars that he didn't have Westbrook passing to him instead of CP3.
Edge: Rockets

My Prediction: I want this win badly.  I'll be live and in person and it would be a lot of fun.  Here's hoping that Hornets fans are good sports and can handle a guy in an Olajuwon jersey making some friendly noise for the visiting team.  I'm not going to jinx it by actually giving an opinion though, sorry.