Share All sharing options for: Rockets/Hornets recap - wagging a finger at New Orleans

Yao was out with "flu-like symptoms" for the game.  Also known as the flu.

No worries though - Dikembe played!   Sadly pictures of the finger wag currently unavailable.  A wag of the finger to the NBA.com media tonight.  Dikembe Mutombo gave us THREE finger wags, with nary a photo of evidence.

Rockets survive in the end and a late fourth-quarter sprint takes them past the New Orleans Hornets for a 95-84 win in a very important Southwest Division matchup on the road. 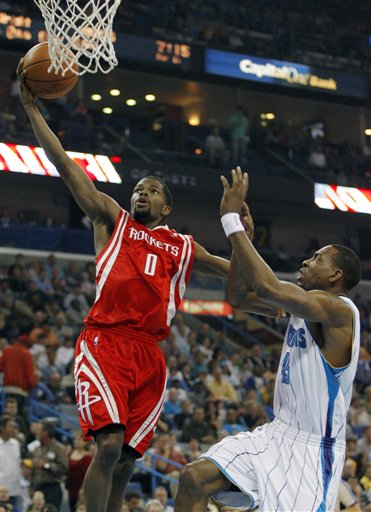 Ron Artest was doing some heavy lifting as a brick-layer tonight.  A McGrady-esque 7-23 from the field (and a Rafer-esque 0-9 from behind the arc.  Cover your eyes... that is awful.  So bad that New Orleans didn't even rotate to Crazy Pills in the end - they just dared him to shoot from deep.  He obliged.)

But... again... no worries, because Von Wafer took the next step to becoming - in his own post-game words - a "complete player."  For a guy who used to be very 2-D, he was very much making all the right plays today.  No settling for 3s or simply driving right into the teeth of the defense.  Tonight Von found open men everywhere.  Von finished with 12 points on an efficient 3-4 from the field.  3 points per shot!  I'll take that every time!

Wafer had a lot of help off the bench in the form of Kyle Lowry (great D on CP3) and Carl Landry (great 2nd half after getting somewhat abused by Sean Marks [yes, Sean Marks] in the first half.)

While CP3 had a typical game, 29 points and 11 assists (to go with 6 rebounds and an absurd 6 steals), the Rockets did not let anyone else get in rythym.  David West struggled to get 16 points -- on 17 shots -- and 13 rebounds.  He also picked up a technical at a bad time when Shane Battier had the audacity to run directly into his moving screen.  How dare Shane!?

The Rockets also overcame the Hornets' perfect night from the free throw line.  A cool 19-19.  Poor Bill Worrell was getting frustrated.  Speaking of Bill Worrell... the "WTF?" quote of the night:

There are just a few officials that are head-and-shoulders above the rest.  Steve Javie is one of those officials.

Just... wow.  I shook my head in disbelief for about five minutes after that one.  I'm still not sure how serious Bill and Air Bullard were about that.  Because Steve Javie sucks.  A lot.  I didn't even realize this was still in dispute.

1.  Carl Landry.  He was named the player of the game.  Who am I to argue?  12 points, 6 rebounds, 2 insane blocked-shots and a whole lot of floor burns.  Not sure we win the game tonight if Carl has an off night.

2.  The Rockets' team defense.  Even though Artest was trying to chip paint off the rims tonight - it did not affect his defense.  He also had excellent assistance from the likes of Luis Landry, Kyle Lowry, Shane Battier, Dikembe and even Chuck Hayes.  Chris Paul got his points, but the rest of the Hornets were left frustrated. 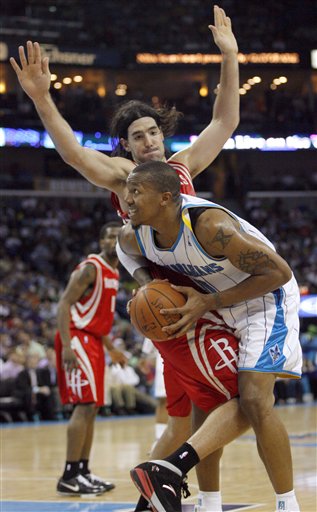 3.  Von Wafer.  As evidence of why we continue to refer to him as "Coach Sleepy" - Von Wafer compiled a +/- of +7 in limited time in the first half while replacing Artest.  Rockets build a quick lead, and yet Adelman immediately removes Wafer to put Artest back in the game... I guess he had to get to 0-for-double digits to prove a point or something?  No matter - Wafer came out strong in the 2nd half, too -- finding open players everywhere, initiating the offense and giving the Hornets fits.  Wafer had a career-high five assists in 19 minutes.  He also finished with a team-leading +14 on the +/- scale (tied with Battier).  Great game, Von!

Awww, hell - this was a big game, let's go with another one--

4.  Luis Scola.  The starters didn't really have it tonight.  Except for Luis.  Who came out on fire.  Scola finished with 14 points and 12 rebounds and was such a mismatch that the Hornets kept rotating between David West and Tyson Chandler onto him on D.  Yes, Byron Scott had to adjust to Luis Scola - and not the other way around.  Epic.

1.  The San Antonio Spurs.  Hahahahaha.  Suck it, San Antonio!  Rockets not only get an extra advantage on the Hornets, but tonight they pick up a game against the Spurs, who somehow lost to the Durants.  Hahahahaha.

2.  The end of the 2nd and the beginning of the 3rd quarter.  Hey, guys, letting the Hornets not only get back into the game before halftime, but also letting them start out with an 8-0 blitz?  Yeah, that's not exactly what we want to see every game.  Can we try to not let that happen ever again?  Okay, thanks.

3.  Ron Artest.  Hey, Crazy Pills... I think we've established that everyone likes you and respects your game.  That said, there is absolutely NO reason why you should ever go 0-9 from behind the three point line in a game.  Anything after 0-5 hurts the team.  Yes, your defense was good, but your offense continued to put the team in a hole against a quality opponent.  This is a dangerous trend.  Please stop giving me heart palpitations.  When the opposing team doesn't even bother to rotate onto you, that's a sign that they want you to shoot that shot.  It's why Rafer and I never got along.  It's also why Rafer isn't here to kick around anymore... then again, your D made up for this (for the most part) and Rafer's never did. 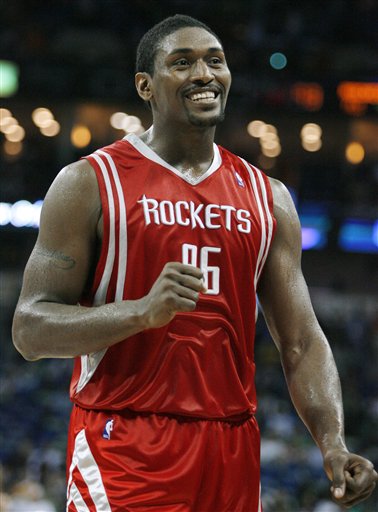 caption:  Ron Artest smiles knowing he got away with his hand being caught in the cookie jar.  Nine times.

In the end, an excellent finish to a game I wasn't convinced the Rockets could win without the services of one Yao Ming.  I can go to sleep quite content tonight.