The Houston Rockets and the undefeated February that wasn't.

Share All sharing options for: The Houston Rockets and the undefeated February that wasn't.

The Rockets were supposed to go undefeated in February.  The only truly "hard" game they had was against the LeBrons.  And that ended up being a 20 point victory in the good guys' favor.  So what happened?

there was the Memphis game.  Memphis owns us somehow.  This I cannot explain.

Then there was the Milwaukee game.  Forever to be known as the day Tracy McGrady lost the ability to dunk a basketball.  On a 10' rim, that is.

Then Tracy went doctor-shopping and found out that his knee was in really bad shape.  The words microfracture were uttered, but sadly not as a joke.

The Rockets then curb-stomped Sacramento before heading into the All Star break.

Yao got to rest.  Scola and Brooks got to enjoy the sophomore game.
(Meanwhile, T-Mac partied with Puffy.)

Upon return from the Break, the Rockets went on a run... T-Mac announced to the world that he was out for the year before his own coach and teammates knew it.  T-Mac went under the knife.  Again.  He is now officially out for the season.

After that, the Rockets really kicked it into gear.  Aaron Brooks shot down the pesky Mavericks (those in Dallas would say that Dirk shot his own team down.)

The Rockets capped a 6-game winning streak by forcing LeBron James into his worst game as a pro.  Ever.  That was nice.

Naturally, the Rockets then got cocky and blew a 16 point lead to the Bulls.  Pass the ball, ABZ.  Stop shooting off-balance jumpers when Scola is open, Crazy Pills.  Oh, and look for the 7'6" guy standing right next to the basket.  kthxbai.

In the end?  What should have been an 11-0 month was an 8-3 month.  Not bad... but we still play in a division with San Antonio, New Orleans and Dirk.  Giving away games to the likes of Memphis, Milwaukee and Chicago is going to hurt a lot in April.  A whole hell of a lot.

Now?  Now it looks like we might be on pace to play the Utah Jazz in the playoffs again.  Which is okay, I say.  Bring 'em on.  Third time is a charm.  Or something like that. 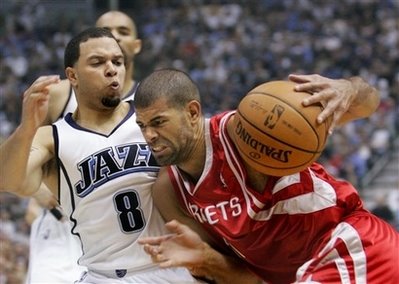 In a not-that-unrelated story - the Rockets travel to podunkville to play the aforementioned Utah Jazz this Wednesday.  A (convincing) win there will go a long way to future playoff success.  At least I hope so.