Unable to find a title for my post, I encourage you to move on and read what I've written

Share All sharing options for: Unable to find a title for my post, I encourage you to move on and read what I've written 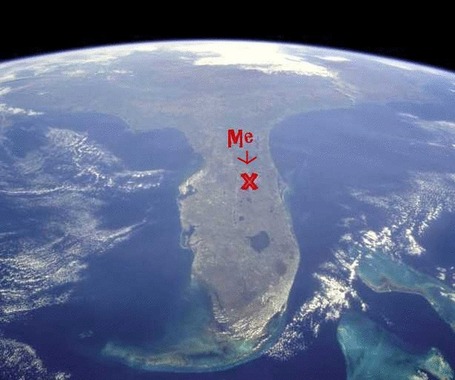 I've been gone a while, at least by my standards.  Sorry, but a week in Florida is much more enjoyable than a weekend spent watching the Rockets.  Among other things, I saw a space shuttle launch, so that made my life complete.  Only problem with Florida (and with, more specifically, the Disney Empire) is that they've got this pain-in-the-neck rule concerning airport transportation.  They told my friends and I that we had to be at the airport three hours before our flight or else they wouldn't take us on the transport shuttle.  Talk about a rotten deal - our flight was at 7 am.  Otherwise, I had a nice little break.  That is, up until tonight.

I wish I could say I was jet-lagged when this happened, but that would be a pretty weak argument.  Here's what went down.  My friend Travis called me up and said "Hey, I've got Rockets tickets against Minnesota tonight.  Want to go?"  Of course I did.  Nothing better to do than see a Rockets game on a boring Thursday night, right?  Before I left, I headed over to my computer to put up the game thread, assuming Lee was still feeling light-headed from surgery and Dave was busy losing a month's salary in Vegas.  I made sure to set the publish time for 7:30, but when my desktop clock hit 7:30, the game thread didn't come up.  I was confused, but I shrugged it off and dashed out the door to my car.  I turned on Sports Radio 610 expecting Rockets coverage, but instead of the Rockets, there was an NCAA basketball discussion.  Again, I assumed nothing was wrong and that Cal-Maryland was more important than the hometown NBA team.  I picked up Travis, and we drove to Toyota Center.  As we walked towards the stadium, I wondered to myself why there weren't any scalpers to be found.  So among all of those hints, we walked up to the ticket lady, showed her our tickets for Friday, March 20th, and took a peak inside.  The lights were dark, there was a person singing, and most surprisingly, there wasn't an empty seat in the club section.  Oops.  "You're a day early," the lady said to us as she laughed.  "There's a concert tonight.  Rockets aren't until tomorrow."  Wonderful.  What a great way to waste time, gas, and money on parking.

Some more thoughts while I've been MIA: 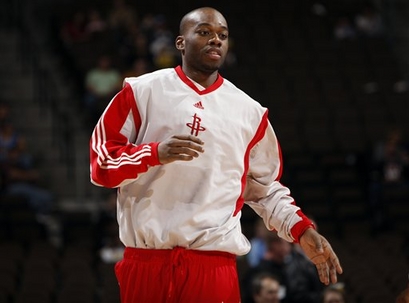 The Carl Landry shooting scared the hell out of me.  I was lying on my hotel bed looking at the ceiling for about a half hour (the bed was really comfortable) just thinking about it.  It's always eye-opening when the morality of star athletes is revealed, especially when it happens to a player whom I'm extremely fond of.  But the star factor makes no difference.  True, some stars are targeted.  Sean Taylor was targeted.  But on the other end of the spectrum, there are the stars that are never noticed.  I don't think this guy knew he was shooting Carl Landry.  I don't think it made a difference to him.  The son of a bitch was going to shoot the gun either way - it didn't matter who he crashed into  And whether or not Landry was cursing this guy out when he was inspecting the damage, or whether he was simply walking with an angry look on his face to see what happened to his car, there was not a single excuse for the shooter to resort to using his gun.  Actually, I can think of one reason, after I did some reading.  According to Chron.com, there is reason to believe that the guy who pulled the trigger on Landry did the same thing to a man after robbing him only fifteen minutes before the car crash.  In that sense, if they had something in the car, then I could see why he'd pull the trigger.  He was in that "whole world's out to get me" state of mind that you find yourself in when you know you're guilty of something.  This man didn't have to pull the trigger on Landry, but given his experience with guns, it was probably, in his mind, the smart thing to do.  I hate people sometimes.

Physically speaking, I think Carl will make a full recovery.  If it's just a flesh wound, he will be fine.  However, the psychological effects will be more difficult to overcome.  We all assume that when a gun goes off, we're probably dead, and when we do live to see another day, it's always tough to deal with, because we were certain that the previous day was our last.  Carl's attitude towards basketball will most likely change.  Either he will...

I'm no psychologist, but that seems like a logical description of what he may go through.  Luckily, he has plenty of teammates to support him, and I think Carl values their support enough that he will come back to the game with more energy and more drive than ever before.  He plays with too much passion to simply let basketball go.  Here's to Carl making a full recovery, and hopefully this experience will further illustrate to him how valuable everything and everyone is in his life.  That's about all I can say about that.

So anyway, about last night... 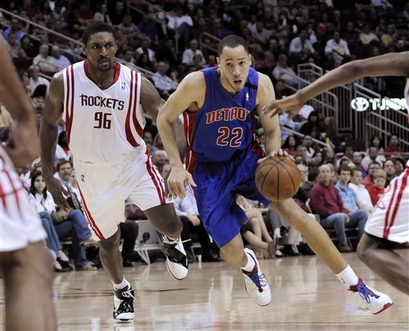 "Where do you think you're going?"

We played decent, and I say that only because we won.  Writers cheat - if we lost that game, I would have been all over the Rockets.  But we won, so...cheers!  I still have one thing bugging me, and I think Rick Adelman has finally figured it out as well.  Yao has got to get the ball in crunch time.  You could see Ricky jumping and hollering on the sideline to get the ball to Yao in the post as time ran down last night.  The result?  A Ron Artest fadeaway jumper.  Another result?  An Aaron Brooks fake post-entry pass and a turnover.  Yet another result?  A nervous breakdown on my part as I turned into Tourettes Guy for 2 minutes: "Ok, ok...PASS.  PASS-HI-DA-BALL.  No.  NO!  Oh...#@$%."  Was it not evident that every time Yao touched the ball at the end, he either scored or was fouled?  Did Ron or Aaron not understand that?  We HAVE to solve this situation, and Rick must get the memo across to the rest of the Rockets: Pass to Yao at the end.  If he's got position, pass it.  Don't hold it.  Don't dribble it.  Pass it.  To Yao.

On the other hand, our defense down the stretch was incredible.  Regardless of who Detroit had on the floor.  The man-to-man defense was menacing.  And kudos to Ron Artest for holding Detroit's only scoring option to 4-17 shooting.  He made Tayshaun Prince look like Prince (Cliche Meter: 7/10).  As he does in every game, Ron made up for any shortcomings on offense by playing fantastic defense.

I want to touch something that I found to be moderately interesting and has absolutely nothing to do with our beloved baloncesto team.  A few friends of mine and I were on our flight to Orlando, Florida, but we got separated during the whole seating process and were forced to sit apart from each other.  I had an empty seat next to me, and it was quickly filled by this girl who looked somewhat like my age.  We start talking casually, and then I ask her why she's going to Orlando, and she says she's going to visit her dad.  Instantly, I assume her parents are divorced, which would be unfortunate.  She then completely catches me off-guard by asking to see my Yahoo! Sports Fantasy Baseball magazine (gotta stay in-house with all of the reading nowadays).  Quickly, she turns to the Astros and scans over the roster and the brief commentary section.  Then she closes it and puts in back in my seat pocket without saying a word.  What a turn-on. 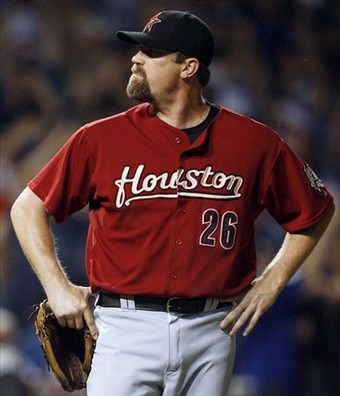 So I get a little intrigued and ask her if she's a baseball fan.  "Not really," she says.  "But my dad is."  Dammit - there goes a potential hour or two of entertaining sports conversation.  And then just out of nowhere, she says, "Yeah, my dad plays baseball."  Oh...well that's something.  "Really?  What's his name?" I ask her.  She responds: "Doug Brocail."  Ah, I know of Doug.  The ageless wonder with a knack for treating a bad pitch like it's the end of the world.  He's Bobby Cox on the mound.  Yes, I know Doug Brocail.  And immediately, I want to know what it's like to be the offspring of a professional athlete.  So I ask her.  Her response isn't what I expected.  "It's not great, but it's manageable."

"Well I mean, last season was pretty terrible and all.  I thought he might be done."

He had a 3.93 ERA and 7 wins, and the team almost made an improbable run to the playoffs.  What's wrong with that?

"I don't know.  It was just pretty miserable."

Stunned, I sit there, my question bank slowly drying out.  Soon enough, I drop the entire subject, turn on my iPod, and we don't speak again for the entire flight as she seems a bit irritated.  In retrospect, I could tell why she might be a little ticked for having to talk about the situation.  She must have done it a billion times before talking to me.

But it wasn't the repetition that seemed to bug her the most - it was the fact that she was the daughter of a baseball player.  She probably moved a hundred times, probably rarely saw her dad, and probably hated baseball for it.  Most importantly, she probably heard or read a boatload of negative sentiments concerning her father after a bad performance.  Think about it - if someone ever came up to your dad and called him "terrible" or "weak" or "awful", you'd want to smack the guy churning out the insults.  But when they are in a newspaper or on TV, you can only try to ignore them.  Through all of this, I realized that as many sons and daughters there are that we see watching and cheering on Papa Athlete, as many Matt McGwires or Darren Bakers that we see enjoying the experience, there are the sons and daughters that completely despise being kin to a professional athlete.  I never thought that to be possible, but it is.  In turn, maybe it's a blessing that I'm not an athlete's son.

So far, my 6-3 prediction for The Gauntlet has held up nicely.  We need to go 2-1 against Minny, San Antonio, and Utah for me to achieve prophet status.  I'm crossing my fingers.