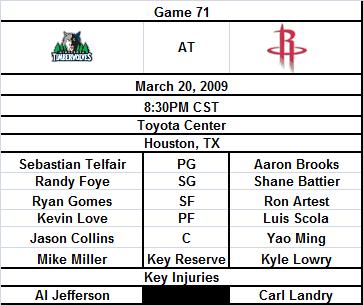 Point Guard
Brooks - With the exception of the Charlotte game, I think he's played pretty well as of late.  He's not getting the assist numbers I would like to see, but some of that has to do with playing with Crazy Pills who is trying to be Steve Francis incarnate with the amount of dribbling he is doing lately.
vs.
Telfair - I assume he's the official 1 guard in Minnesota, mostly because he's a midget of Aaron Brooks proportions.  He's been underwhelming since day one in the NBA and while he's not the liability he once was on the court, he's nothing special.  He's Rafer-esque from the field.
Edge: Rockets

Shooting Guard
Battier - Let's have a talk big guy.  When the other team leaves you wide open, don't think about it, just shoot.  Every time that I can see that big Duke brain of yours spinning, you miss.  Every time you just let the ball fly, it seems to go in, or at least have a chance.  Okay champ, let's get back out there.
vs.
Foye - The Timberwolves actually wanted him over Brandon Roy.  Now I'm not one that thinks every decision Kevin McHale is awful, just everyone not involving Kevin Garnet.  A trade I think he will ultimately win, mostly because Al Jefferson is going to be better than KG was over his career as long as he can come back from this knee surgery.  However, back to my point, Randy Foye is not Brandon Roy.
Edge: Timberwolves

Small Forward
Artest - Is it wrong that when I look up his stats, I instinctively look alphabetically under C for Crazy Pills first?  I would just like to see him take the ball to the hoop more.  It's where he's at his best, even if his field percentage isn't great.  He's able to get other teammates involved, and Scola or Yao can clean up his mess.  From the three point line, when he's not on, you have no idea where the rebound is going.
vs.
Gomes - Not the greatest player, but you'd be silly not to want him on your team.  He impresses me every time I see him.  He's not the most skilled player either, but he tries hard.  The problem for the Timberwolves is that they have to start him and he's clearly a bench player that comes in to do some dirty work.
Edge:  Rockets

Power Forward
Scola -Hard to say this, considering he's over 50% from the field over the last 5, but he's struggling a bit from the field as of late.
vs.
Love - He's basically a less savvy Luis Scola.  I'm still not convinced that he does this as a primary player on a good team, but he's clearly better than I thought he would be.  Who knows, maybe time will tell.  OJ Mayo could turn into Shareef Abdur-Raheem (though I think that's Rudy Gay's job) and Kevin Love turns into Kevin McHale.  It could happen.  And he'll be better with Al Jefferson taking pressure off of him.
Edge: Rockets

Center
Yao - I agree with Rick Adelman.  Oddly, it's his job to make the team get Yao the ball.  Look what happens when they do.  Yao can dominate like that night in and night out, they just have to feed him the ball.  It's really that simple.
vs.
Collins - It doesn't matter who's on the court, if the Rockets get Yao the ball, no one or two on this team can stop him.
Edge: Rockets

My Prediction : Rockets win.  They will clearly outscore the Timberwolves.