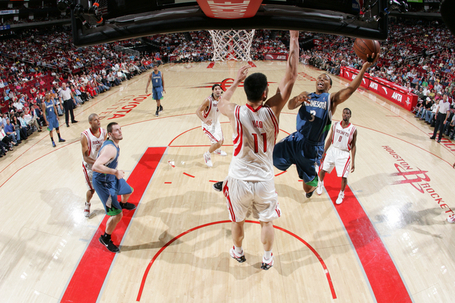 As soon as Bassy tried to take over the game, any chance of a T-Wolves comeback was lost.

I was at tonight's game.  Section 104, row 15.  Wonderful seats for a boring game.  But boring was probably the best we could have hoped for; a boring blowout win over an undermanned lottery team.

It was nice to see some actual defense on Randy Foye this go-around.  He put up 20 on us in our last meeting, but we made an effort to close out hard on his jump shots, and it paid off, as he went 3-11 from the field for only 9 points.

Our offense was clicking, but only because the Wolves play some of the worst defense this side of Oakland, California.  They played one-on-one against Yao Ming for the entire night...and matched up 6'7 Craig Smith against him.  While Yao didn't have his greatest night, it was clear that he wasn't having to play with the same effort that he would were the Rockets playing a good team.  We had an abundance of open three pointers, and we took advantage of them, hitting 11-20.  Shane Battier looked comfortable with his shot for the first time in a while, and Brent Barry had three tres of his own.  Hell, even Brian Cook hit a three.  It was that kind of night.

Most importantly, we hit 14 of 14 free throws, something that isn't dictated by the skill level of the opponent.  Ever since the Denver free throw debacle, we have recovered our charity stroke and have once again used it to our advantage.  In order for us to win against the big boys, the free throws have to fall.  That's something that we have in our arsenal that many other teams don't have.

Random thoughts from the club section: 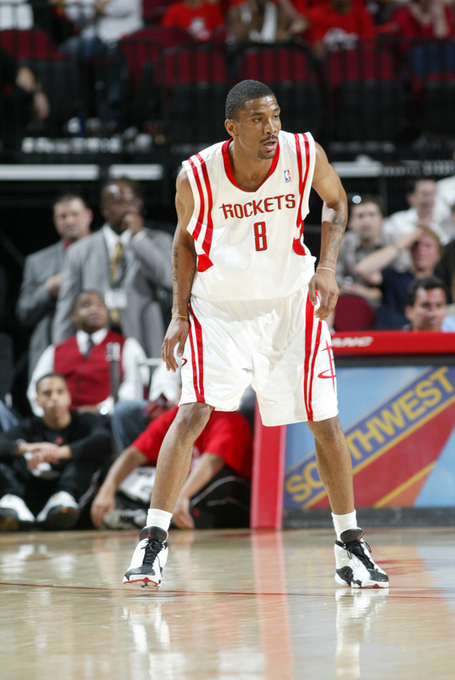 He's kind of the best dunker on the planet.  In his Rockets debut, White went 2-2 with a three pointer, a steal, a block, and 3 turnovers, all in 3 minutes and 42 seconds of playing time.  Question for Mr. Rick Adelman: Can you maybe spare ten minutes of playing time to Flight when we are up by twenty and clearly going to win the game?  Is it that important for Ron Artest to be harrassing Rodney Carney or Ryan Gomes when we have the game in hand?  Come on, Ricky.  Put James White in the game.

That's all I've got for tonight.  I'm glad we were able to take care of this game without wearing out Yao.  Lord knows he's going to have to give it his all against San Antonio and Utah.  I would be happy to win one of those games, and I'd be even happier if we won both.  We've got a chance to go ahead of San Antonio in the standings - let's capitalize on it.