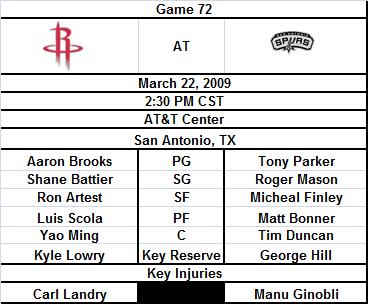 Point Guard
Brooks - I don't want to see him deferring to Ron Artest as the point guard.  Ron doesn't ever need the ball outside of the three point line at the start of a play.  It's time that Aaron stops doing that.  It's on him, since apparently Rick Adelman won't make it stop.  That alone would increase the teams production and ABZs assist numbers.
vs.
Parker - I have never been impressed with Tony Parker in the past.  That has all changed this year.  He's been the third best PG in the league, behind CP3 and DWill, and it's really not arguable.  Every part of his game. has stepped up and he's just fun to watch play.
Edge: Spurs

Shooting Guard
Battier - Mr. Battier, I hate your college, a lot.  Your team always gets the calls late and it's infuriating.  I do like you though, and I like that Coach K instills hard work in his players.  That way, when it gets down to the end, your team has kept a 2-4 point lead and then can just let the referees take over.
vs.
Mason - I keep reading about what a great pick up he has been for the Spurs.  I haven't seen it, and I hope not to see it tonight.  He seems solid and is a good shooter, so maybe it's just that he fits the system very well like Shane does for our defense.
Edge: Even

Small Forward
Artest - Ron played a great game against the Timberwolves, he stayed within himself and didn't launch a lot of stupid shots.  He even shot only 3 three pointers.  That Ron Ron would be nice to have down the stretch.
vs.
Finley - My brother in law, a huge Mavericks fan, calls him "Sir Clanks A Lot".  Yet somehow that never seems to be the case against the Rockets.
Edge: Rockets

Power Forward
Scola - This is the type of team that Scola is going to have a blow up night against.  You have to work harder against the Spurs, and that's what he does best.  I expect 18 points and 12 rebounds tonight.
vs.
Bonner - Nothing special, but is a solid player that you know what to expect from.  He plays hard and seems to come up with a few big plays every night to keep possessions or leads alive for the Spurs.
Edge: Rockets

Center
Yao - I'm glad he finally got some rest last game.  He's going to need more of that against the bad teams so he can be ready for more than one round in the playoffs.  Tonight I see him playing a lot of minutes in a close game.  If the Rockets remember to get him the ball late, this game will go the Rockets way.
vs.
Duncan - I haven't seen a ton of spurs games this year, but what I have seen seems to be Tim Duncan playing a lot more true center this year.  That's a mistake for him against Yao, but I don't see how they have any choice
Edge: Even

My Prediction: Spurs will probably win this game.  It will upset me.  All I'm asking for is that the Rockets play hard.  No Manu tonight should mean a Rockets win, but it's on the road, and the Spurs own us in San Antonio (or anywhere else for that matter).