Did I miss something? Is Rick Adelman a Coach of the Year Candidate?

Share All sharing options for: Did I miss something? Is Rick Adelman a Coach of the Year Candidate?

Something just blew my mind.  From Spurs coach Gregg Popovich:

"That whole organization - Rick's a Coach of the Year candidate for what he's done - and the players deserve a lot of credit for sticking together with a lot of injuries," Popovich said.

To be sure, I checked my browser again.  Nope - I wasn't reading The Onion.

Really?  Could it be possible?  Is there some other narcoleptic, neurotic, Norman Dale-looking coach out there that we've failed to recognize?  Is it Norman himself, risen from the cornfields in a Tupac Shakur-like fashion to rule over the Nuggets?  No - that would be George Karl.  Thus, there must be no mistake.  Coach Sleepy (alias "Rick Adelman") is being called a COY candidate by a fellow coach who some consider to be the NBA's best. 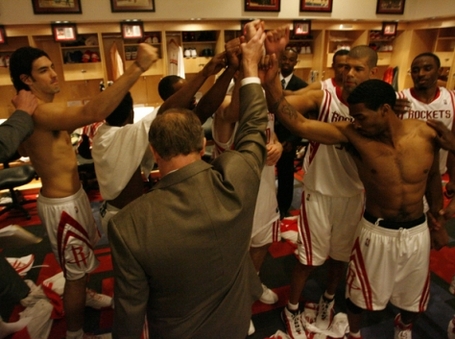 The odds are strong that Ricky fell asleep during this huddle.

Popovich must have overlooked something.  Right - his Spurs never played the Rockets during Sleepy's true winter hibernation period (December thru January).  However, he must have been informed of Sleepy's habits somehow, as The Internets have become truly unavoidable (R.I.P. Seattle P.I.).  Is he not aware of Sleepy's uncommon man-love that he shares with his starters, his obsession with continuously putting them back into the game in the fourth quarter, even if they have only hit one of ten shots beforehand and even if their back-up has just led a furious comeback?  Has Popvich not witnessed Ricky's Goober face in action as he tries in vain to argue calls?  Doesn't that factor into the voters' decision?!?

Fine.  Yes.  A thousand times yes.  There's no point in denying it anymore.  For all of the reasons I dislike Rick Adelman, there are more reasons that support his case.

You know why that quote caught me off guard?  Because I hadn't thought of the possibility once.  Here I am, constantly crucifying Adelman, trying to convict him of consistently costing us contests.  But is it his fault for trusting his starters at the end?  Aside from the New Orleans game, no, no it's not.  In fact, to his credit, Adelman has adjusted his rotations, and has given the bench players more playing time at the end of games.  While many of us wanted to see Kyle Lowry stay in the game yesterday, Adelman put Brooks back in, and Aaron hit a big shot for us.  Adelman's move paid off.  Then, with the game on the line, Rick stuck Lowry and Chuck Hayes back on the court to get a defensive stop.  And it paid off.  What seemed like a simple move for all of us was really a giant step forward for Adelman and his trust with his backups.

Chances are, Rick will win coach of the year.  I don't see anyone else nearly as qualified.  In most cases, the criterion for COY is A) Winning more games than everyone expected.  B) Dealing with injuries constructively.  Let's go over the list of coaches who may be considered:

Rick is a step above all of them.  His biggest star is out (even if I think that helped his system), he had to work Ron Artest into the rotation successfully, and despite all of the petty losses we have suffered at the hands of poor teams, we have beaten all of the NBA's powerhouses (except for L.A.).  While he may infuriate me every once in a while, Sleepy does deserve the COY award...for now.  There's always a chance we could collapse down the stretch or in the playoffs.  And everyone here knows who we would look to blame first.