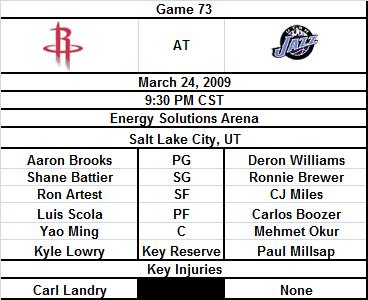 Point Guard
Brooks - An absolutely awful game versus the Spurs somehow in the end didn't hurt the Rockets.  He has to step up his game, or Kyle Lowry will eat more and more into his minutes.  I'm not saying that's necessarily a bad thing, but wouldn't it be nice if that didn't happen?  It would mean they were both playing well, right?  I'm liking that idea quite a bit.
vs.
Williams - I think I write the same thing every time about Deron Williams: He's the second best point guard in the league.  Look at his stats though, he's having exactly the same year as last year, he hasn't improved, and he's actually shooting a decent percentage worse from the field and three point line.  This changes nothing for tonight, he still kills the Rockets, I just thought it was interesting.  One day the guys will learn how to defend the pick and roll, and here's a hint, Yao shouldn't be part of the defense.
Edge: Jazz - This game is the one that Rick Adelman should start Kyle Lowry.  Call it a "Match-Up decision" and let's be on with it.  I doubt he will, but it would be nice.  I'm still holding out hope for ABZ to have a huge game and get some confidence against the Jazz.  We all know the Rockets are going to need it.

Shooting Guard
Battier - He's killed the hitch from his shot and it's made a world of difference.   2-3 from the three point line the rest of the way would be phenomenal.  It would also be a pipe dream, but I like to dream.  Shane has the capability to hit those shots because he's left wide open at least 3 times a game from the corner.
vs.
Brewer - He's capable of being more than he is, in fact, when Boozer idioticly signs somewhere else this summer, I bet he does just that.  He's never going to be a star, but he can clearly do more than he's doing right now.  Then again, maybe my opinion is skewed because he lights up the Rockets like fireworks on Chinese New Year in Hong Kong.
Edge: Jazz

Small Forward
Artest - Maybe it's just me but I didn't even notice that he took 20 shots.  He's played very well over the last 3 3/8 games.  This is the Ron Artest that can lead the Rockets deep in the playoffs.  Now we just have to avoid him going "No Layups" in Utah again, no matter how funny it would be.
vs.
Miles - Utah pays him more than the Rockets pay Scola or Landry.  LONG LIVE DARYL MOREY!!  Sadly this is the contract that Von Wafer's agent is going to go after, and it's not going to happen with the Rockets.
Edge: Rockets

Power Forward
Scola - Having a blow up year.  I read recently that after next year he'll be a restricted Free Agent, not a free to go Free Agent.  Can any back that up with proof?  If so, I'm still not sure that the Rockets should wait to sign him longer term, but it definitely means they should think about it.  Waiting would mean they are at the mercy of what is out there for him, but at least they know if they are willing to pay, that he's there no matter what.  I expect a huge game out of him.  He's due against the Jazz in every way.
vs.
Boozer - Officially my least favorite player in the league.  He's naturally talented and he works hard, I just don't like him.  He could give every penny he makes from here on out to charity and I still wouldn't like him.  Since the last person I disliked in the league this much happened to be Karl Malone, he's right at home on my most hated team.
Edge: Jazz

Center
Yao - While he wasn't dominant against the Jazz last time out, he's actually playing them pretty well this year.  Against the Spurs something was very wrong.  Sometimes you just are out of rhythm on the court and that was clearly the case on Sunday.  He still righted the ship in time and led the team to a victory at the end of that game.  He's clutch and that's exactly what the Rockets need.
vs.
Okur - If you think Mehmet Okur is as good as Yao Ming then may the basektball gods have mercy on your Jazz homer fandom.  That said, he is better than I have given him credit for, clearly.  I still have this strong feeling that he lays an egg and I get to throw it in Jazz fans faces tomorrow.
Edge: Rockets

Injuries/Suspensions
Houston Rockets
OUT - Carl Landry
Utah Jazz
OUT - None