Recap: Rockets fail to capitalize in the paint, lose big in Utah 99-86

Share All sharing options for: Recap: Rockets fail to capitalize in the paint, lose big in Utah 99-86 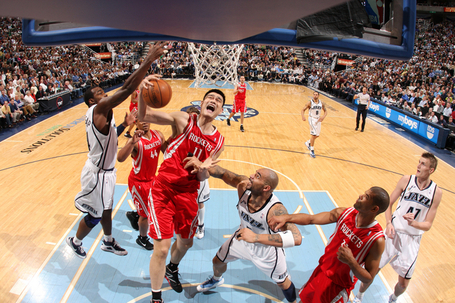 Last night's game was filled with frustration.  So many opportunities, and so many missed opportunities.  Let's forget referees for a second, because to be honest, with the exception of a few calls in the third and fourth quarters, the officiating wasn't nearly as poor as it usually is in SLC.  I want to look at one period in this game in particular, that being the period in which Von Wafer and Kyle Lowry entered the game in the third quarter.

At the 2:43 mark in the third quarter, we were down by six.  Enter Kyle and Von, something that I had eagerly awaited to happen.  Last time around, when we were losing to the Jazz on March 4th, Lowry sparked a comeback by himself, drawing four fouls in the process.  That didn't happen last night.  At all.

Let's look at some of the plays that occurred from the 2:43 mark in the third to the 7:58 mark in the fourth, when Wafer and Lowry were taken out:

A few notes on each play:

The Jazz had twelve blocks.  Five on Ron Artest.  For all of the troubles that the Jazz had in terms of scoring points in the paint, they made up for it with paint defense.  Artest's intensity and strength was met with a tough Ronnie Brewer, who I consider to be the Jazz's MVP of this game.  He ignited the crowd (albeit an annoying, whiny crowd) with a few dunks and hit 8 of 9 free throws.

My only beef with the referees in this game is rooted in the free throw disparity.  The Jazz shot 25, while we only shot 14.  Many of the fouls that were called on us were with the body.  The Jazz did a good job avoiding bumps, but the arms were a-swinging.  Mehmet Okur fouled Luis Scola twice on that ridiculous 5-offensive rebound possession we had.  Milsap had a few arm-chops.  I thought we could have shot at least six more free throws, and I think a few body calls at the end against us could have been no-calls.  While the referees did not by any means change the outcome of the game, there were some problems.  And that's all I have to say about that.

We also got three-pointer happy.  26 threes in a game?  While we hit 10 of them, many of those three-pointers were quick shots early in the possession.  It wasn't smart for us to jack up all those shots the way we did.  Ugh.

Jump for the rest of the recap... 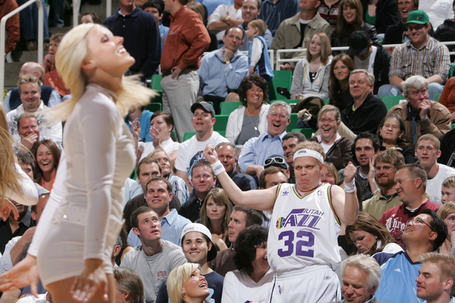 Shane Battier -- Shane was money from behind the arc, going 4-7 from three while scoring 18 points.  It wasn't his best game defensively, as Kyle Korver/Ashton Kutcher/Hilary Swank went to work on him early.  But we would have never been in this game without Shane's contributions.  He was the only one who could get it going on offense.

Aaron Brooks -- I wasn't impressed with Aaron's performance until I looked at his box score.  20 points?  Nice.  No turnovers?  Nice.  For all of the quick, ill-advised shots I saw Aaron take tonight, he made up for it by scoring on the following possession.  If only he could have done it late in the game.

Luis Scola -- He didn't take a shot in the first half.  Not one.  And yet, he still managed to go 10/12 with two steals.  Someone get Luis the ball before I run onto the court and do it myself. 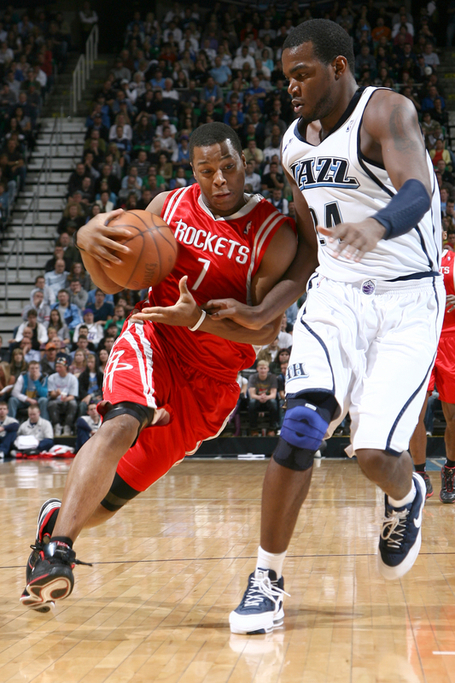 Kyle Lowry -- Lowry became selfish tonight, and whenever a subpar shooter is selfish, things like 0 for 6 from the field happen.  I do appreciate the aggressiveness, but it wasn't used wisely.

Ron Artest -- Ron took some bad, ugly shots, and when he drove, he didn't go up strong with his legs.  Brewer owned him in the paint.  His defense on Brewer wasn't very good either.  It was just a really bad game for him.

Brent Barry -- Bones went 0-3 from deep.  That pretty much sums up his night right there.  I could have put Von here, but I already ragged on him.

Offensive Rebounds: Rockets 13 - Jazz 3.  We failed to convert on all but two of those second chance opportunities.

We needed him.  He wouldn't have won the game at the rate we played, but he could have done some good against Milsap.  He can also finish inside, something we didn't do (for the 1000th time).  To state the obvious, I'm hoping Carl comes back really, really soon.

Next Game: Saturday vs. L.A. Clippers.  We must win this game.