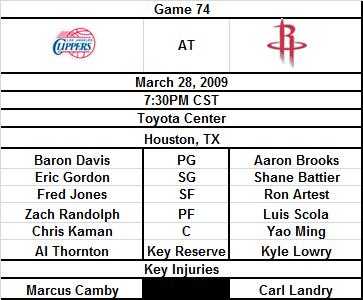 For full disclosure, I have absolutely no idea what Mike Dunleavy is thinking with his roster.  This was a complete guess with Camby out for this game and Davis having sat out Friday with a virus.  I'm guessing Davis plays.  Dunleavy's starting lineup has changed nightly though, so this is basically what he went with last time, only subbing in Kaman, because it's funnier, for Camby.

Point Guard
Brooks - I'm not going to go so far as to say he played well against Utah, but he certainly wasn't the problem outside of about 3 possessions. The issue is that he wasn't the answer to the problem either.  Kyle Lowry had his worst game as a Rocket, so it made the PG position look even worse.  Overall the PG position has worked well since Rafer was traded and I expect it to continue to improve.  We're just going to have to pretend Wednesday didn't happen.
vs.
Davis - Davis was out with a stomach virus last night, but usually that's a one night thing with NBA players, so I think he will play.  He has been nothing short of a dissapointment in LA.  I wish that wasn't the case because he's one of the NBAs most likeable guys.  It has to be hard having no idea who you are going to play with night in and night out though.  And seriously, Elton Brand, that was just cold.
Edge: Clippers - But if Davis doesn't go, it goes to the Rockets

Shooting Guard
Battier - Had his best game of the season while everyone else flopped against Utah.  He looked young and spry.  I'm not sure if his foot just felt good or what.  I kept expecting to read somewhere that he got a cortisone shot, but I haven't seen it yet.  Either way, if Shane plays like that the rest of the way (which is nearly impossible) the Rockets will make it far in the playoffs.
vs.
Gordon - Good player playing on an awful team.  He is gaining bad habits daily.  Right now he's not very consistent.  Some of that is because of the lineup inconsistencies and some of it is because he came out of college a year too early.  If he can ignore the bad team influence, he could be a really good player.  Basically that means he won't be a Clipper after 3 years.
Edge: Even - When Gordon becomes the consistent player he should become, he'll have the edge here.

Small Forward
Artest - Ron Ron is shooting the second worst percentage (by 1%) of his career while also shooting the second best three point percentage of his career.  He's doing what I asked and driving to the hole, but he's doing it with no plan on what he will do once he gets there.  So maybe I should be more specific.  Mr. Artest, sir, would you please drive to the basket, with a plan to score and in control enough to do so, more often?
vs.
Jones - Al Thornton should be starting, but for some reason didn't last night. However, they both played a lot of minutes.  I'm not going to pretend to understand the worst coach in the NBA though so I'm just marking down who he started.  Thornton nor Jones has the edge over Artest though.  Al Thornton is one of the worst stat players in the league, he does nothing to help his teammates and Fred Jones is just an NBA journeyman at this point.
Edge: Rockets

Power Forward
Scola - He is officially one of the best rebounders in the league, but if the Rockets are going to make noise in the playoffs they cannot completely ignore him on offense in any game.  He's going to need to assert himself to make that happen, but he's perfectly capable of doing so.  My ideal game is 17 shots for Yao, 15 for Artest and 12 for Scola.  They'll have to pick up the pace a little bit for that, but that's really where Scola needs to improve a bit.  He's great on the break but doesn't always follow.  Most of that is because he wears himself out at all other times of the game but I still think he has it in him.
vs.
Randolph - He is the exception that proves the rule on the greatness of 20 and 10 players.  He scores his 20 by disrupting the offense, and gets his rebounds without really doing anything but being big.
Edge: Rockets

vs.
Kaman - I can only assume that Kaman will start here.  After having a break out season last year, he's been injured too much this season.  Kaman's a good player, but clearly in the second tier of centers.
Edge: Rockets