We appreciate the national media attention, but...

Share All sharing options for: We appreciate the national media attention, but...

For the last time, the Rockets did not "lose" McGrady at mid-season.  Yes, he made a formal announcement right before the trading deadling, but for all intents and purposes, the Rockets simply did not have the services of Tracy McGrady all year.

Alas, not everyone sees it this way.

If this had happened in 2004, hell yeah this would be an amazing story.  This version of T-Mac has been sorely missed: 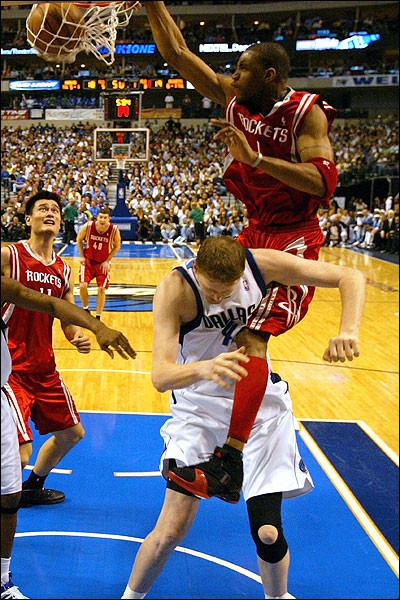 These are not all-star numbers.  Nor are they the kind of numbers that can't be replicated by many NBA players.   Hell, when T-Mac had an extended absence in January, Von Wafer stepped up and matched his point production with relative ease.  Von isn't the dynamic player McGrady has been and could be again, but the point is that McGrady's absence was never going to hold back the Rockets.  At least not this year.

The current version of the Rockets is damned good.

I wish the national media would recognize that for what it is.  The "Tracy McGrady" storyline is not nearly as big of a deal to this team as people would think.  Hell, this team is going to win a playoff series!  It's going to happen.  At which point McGrady might cry and only then will he factor into the storyline.