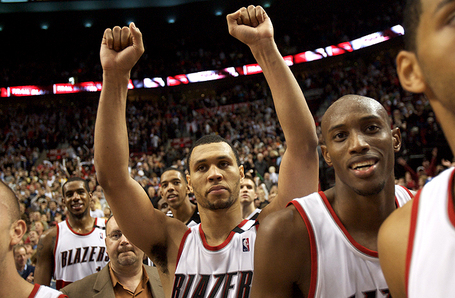 "Playoff Perspective" provides a look at the Rockets' possible playoff opponents from the opposing blogger's point of view.  Each team, from Dallas to LA (as the chances of us playing Phoenix aren't very probable), will be represented.  On today's edition, Ben Golliver of the fantastic SBN blog Blazer's Edge gives us his take on a Rockets-Blazers first round match up.

What advantages do you think the Blazers would have over the Rockets in a playoff series?

I like Brooks vs. Blake.  Ranking the point guards of the likely Western Conference teams you've got an elite group (Paul, Parker, Williams, Billups), a solid group (Kidd, Fischer) and then the dregs (Brooks, Blake).  No disrespect to Brooks; I like him as a player.  Blake just gets abused by everyone else on the list. Drawing Brooks would be a relative advantage for the Blazers (despite the fact that he will be able to get into the lane at will) because of his limited playoff experience and overall skill set.
I look at the Blazers' 4th quarter execution as a potential advantage over the Rockets.  Brandon Roy is just itching to blow up during this year's playoffs and I like the ball in his hands with the game on the line more than I do anyone on the Rockets' roster, by a good margin.  Also, Outlaw, Rudy, Blake and Aldridge have delivered at various times this year.  There's a lot of good options there and a lot of guys with chips on their shoulders looking to make a name for themselves.
Although this borders on fluff, I like the mentality that the Blazers will bring into any playoff series ("nothing to lose") compared to the Rockets ("we're going to blow this again, aren't we?").  Of course, Charmin-soft Peace Corps Volunteer Tracy McGrady will be in street clothes so I guess that nullifies this potential advantage.

The Rockets' perimeter defense, defensive intensity and size in the post work to negate some of the things the Blazers do best.  The Blazers' offense runs at peak efficiency when Brandon Roy is getting foul calls and LaMarcus Aldridge has time and space to operate.  Artest and Battier body up on Brandon and cause him more trouble than almost anyone.  The Rockets also have a lot of guys to throw at Aldridge.  Scola, in particular, gives the Blazers trouble.
Yao, of course.  The guy's calf is bigger than my waist. I've measured. Oden, in the spotlight, will probably struggle.
I also think Adelman over McMillan is a disadvantage for the Blazers.

Would home court advantage affect your chances greatly, marginally, or not at all?

Greatly, of course.  As of this writing the Blazers are 30-7 at home, 16-20 on the road (only 1 road win against a WC playoff team... a miracle comeback in New Orleans after Chris Paul went down injured).
Given their youth and lack of playoff experience, the Blazers are unlikely to win a playoff series this year; I would be shocked if they won one without home court advantage.  This has been a team and a season full of surprises, however.

Compared to the other possible match ups, how confident would you be in your team if they faced the Rockets in the first round?

The Rockets would be a fine draw for the Blazers.  It would certainly be an intense series.  One of life's great pleasures is watching Yao Ming fall down so I would welcome the matchup if only for the chance to see that happen. I think it would go deep -- at least 6 games.  Regardless of who had home court advantage I would pick the Rockets to win due to the Blazers' lack of playoff experience and struggles on the road.

Thanks again to Ben.  Want to know more about Portland?  Check out Blazer's Edge.