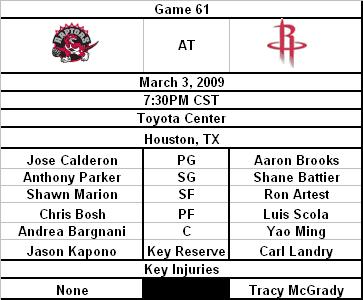 Revenge happens tonight.  The Rockets sustained a 21 point loss in a game that was not even that close the last time these two teams met.  Von Wafer and Luis Scola were the only two players that showed up with their A games and somehow Andrea Bargnani played Yao toe to toe.  In my best Texas drawl "We don't take to kindly to them Raptors round these parts, ya here?"  It's time for some payback.  The Rockets are 9 point favorites, they'll cover.

Point Guard
Brooks - 22 points and 10 assists, not perfect based on the 17 shots, but I'll take it if he can deliver it.  Tonight I expect him to focus on his passing, something that allowed him some great looks against Minnesota.
vs.
Calderon - A very good Point Guard in the purest since.  He efficiently runs an offense, gets assists that a lot of other PGs don't get and runs a 4/1 A to TO ratio.  He would start for the Rockets, but his defense is worse than either of our guys.
Edge: Raptors

Shooting Guard
Battier - Not scoring quite as much usual, but that is mostly because Artest, Wafer, Scola and Brooks are taking those shots.  I like the plan to get Shane to simply dominate whoever he is guarding.  It would be nice to see the three point percentage continue to creep up, and I think it will.
vs.
Parker - Good shooter that doesn't make a ton of mistakes.  His points are more a product of how bad the Raptors are than how good he is though.
Edge: Rockets

Small Forward
Artest -23 PPG on 51% shooting, 5.2 REB, 3 AST and 2 STL a game.  Yes please!  Other than a 4 minute stretch at the end of the Bulls game, Ron has been phenomenal since McGrady went down.  He's been exactly what Morey (and I) hoped he would be, maybe even more.
vs.
Marion - Went out with Flu like symptoms 6 minutes into his last game but is expected to play tonight.  Marion used to be one of my favroite players in the league, but he's clearly crazy since he wanted away from Nash and Stoudemire.  Clearly not the player he once was, but he can jump up and bite you.  On a side note, I have no idea when he is going to start playing like it's a contract year, but let's hope it's not tonight.
Edge: Rockets

Power Forward
Scola - By the end of the season he'll be averaging a double double, mark it down.  Bosh can be contained and Scola is the type of guy that will frustrate him into stupid shots.  Scola had a great game the last time against the Rapotros and I don't see anything changing this go round.
vs.
Bosh - Well, hmmm, Shaq just called him "The RuPaul of big men".  That's gotta hurt.  He's not on the Rocket wish list for 2010 from everything I've seen and he really shouldn't be based on need.  He's a great player, but somehow is 6'10 and weight 230 still, I don't get it.  He can't guard the stronger power forward/centers, but they can't really guard him either.
Edge: Even, based on what Luis will do tonight.  I'm not arguing this

Center
Yao - Much like against the Cavaliers, Yao has some payback to exact.  Barnani will not be a factor in this game.  I expect Yao to thouroughly dominate this game and to impose his will from beginning to about mid 4th quarter where he'll be sitting in garbage time.
vs.
Bargnani - See above
Edge: Rockets

My Prediction: Rockets win, by a whole, whole lot