NBA Playoff Picture: Houston Rockets honing in on the second seed in the Western Conference

Share All sharing options for: NBA Playoff Picture: Houston Rockets honing in on the second seed in the Western Conference

The Rockets may not have stayed healthy this year, they may not have won 60+ games, and they may not ever have the services of Tracy McGrady again, but if I told you that they would be the number 2 or 3 seed in the Western Conference, you would have jumped for joy, right?  I'm saying that not only is it possible, but that I would give it a better than 60% chance.  Let's analyze the games left for each team and we'll do so in alphabetical order of the top 8 other teams and then analyze the Rockets final games.

The Dallas Maverics have done just enough to keep a lead over the Phoenix Suns to this point, but their 5-5 streak in their last 10 leaves something to be desired for Mavs fans.  I think they'll close the season out strong.  Dallas has two back to back situations, but both are favorable.  Miami comes to Dallas after what should be an easy win for the Mavericks in Minnesota and Minnesota comes in after Dallas takes a short trip to New Orleans. 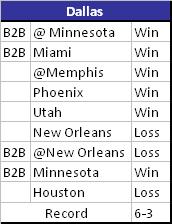 With a 6-3 final record, Dallas would finish at 49-33.  That's about on par with their season to date and has them winning a few playoff type games.  The one game I'm not as sure about is the final game of the season, but the Mavericks are not getting to a position to have home court advantage and the Rockets will be fighting for the number 2 seed.  I see that going the Rockets way.

Jump to see the remaining contenders.

The Denver Nuggets are a hard team to figure out.  They are playing very well as of late, going 8-2 in their last ten and climbing into a virtual tie with the Rockets for 3rd place in the West.  I'm not buying what they are selling though and think they will slp to end the season. 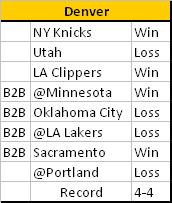 The Nuggets are too up and down for my taste and with 2 back to backs in a row, I see them losing some games.  Losing a game to a poor team like OKC could happen, mostly because I think they will drop at least one game they shouldn't and I think that game the Nuggets will be a looking ahead to the Lakers.  There are simply too many guys that are not mentally tough on this team in my opinion and only one that you know is in Billups.  Going 4-4 may look a little out of place with their latest 8-2 streak, but that's the way I see it.

The Los Angeles Lakers have first place sewn up, but I think Kobe Bryant is on a mission.  This isn't a team that is just going to give up too many games down the stretch.  The Atlanta Hawks loss was the one I was pointing to when I started writing this as a focus point and I don't see that changing.  Sadly since it took two extra days to write, I don't look like Nostradamus. 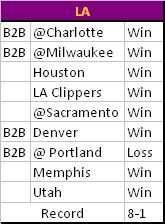 An 8-1 finish is the run the Lakers should finish on, with the only question marks being Houston and Utah at the end.  The Lakers own the Jazz much like the Jazz own the Rockets.  That one could go either way though with the Lakers potentially shutting it down for the final game before the playoffs but that is not Phil Jackson's typical MO.  This will likely be a statement game for the Lakers going into the playoffs.

I make no apologies for it, but the Hornets are my second favorite team.  Chris Paul and David West are great players and work hard at being better.  They're built for the playoffs and I expect them to start playing like it down the stretch. With a huge win over San Antonio on March 29th they are on their way. 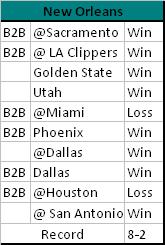 Finishing  8-2 will take some work.  The Hornets will have to beat Utah, meaning Chris Paul will need to step it up even further and outplay Deron Williams.  That game is at home, and thus on the road for Utah (14-21 on the road), so the hurdle is much smaller.  The big question mark is in San Antonio, but the Hornets have gone 2-1 so far against the Spurs.  New Orleans plays a Dallas team twice that they match up extremely well against.

Phoenix Suns (Bright Side of the Sun SBNation site)

They were in the thick of the hunt until they  decided to lose 3 games in a row.  Not even a 5-5 stretch by the Mavericks has helped them.  And there is virtually nothing short of a Dallas collapse that will get them in the playoffs, and even then they'd have to basically go undefeated.  It's not going to happen.  But, for humor sake, and since the next closest team is 33 games out of first place, we'll put them here. 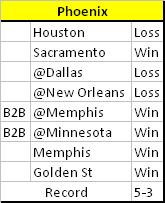 As you can see, not much faith has been put in the Suns.  They took too long to play ball in the way the team was built to play, and allow an astonishing 107 points a game to their opponents.  Letting D'Antoni go was epically ignorant and has not worked.  Instead they reverted back to playing his style without him.

Going into the season that the Trailblazers were poised to be much improved team.  Not many believed they could potentially win their division however.   Sitting one and a half games back of Denver, they have the ability to do just that.  Portland boasts the 4th best home record in basketball, but as is typical of a young team, they are 16-20 on the road.  Home court is going to be a necessity to get out of the first round. 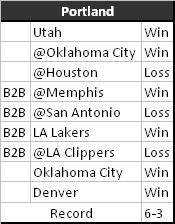 A 6-3 record to end the season would be a strong statement, but likely wouldn't be enough to overtake the Denver Nuggets for first place.  It's still possible, but Portland is going to need to find way to not lose to a bad team while looking ahead to the playoffs.  They'll likely not do that though and lose to a team like the Clippers after a huge home win over the Lakers.

The San Antonio Spurs have been the measuring stick for teams for a decade.  They have found a way to play through numerous injuries and somehow be in position to be the number 2 seed in the West.  They are 26-11 at home and 22-14 on the road, I like that kind of consistency. 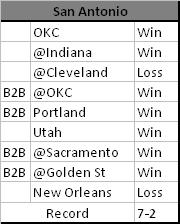 Closing the season out strong will be important to the Spurs, but given their road record it might no weigh as heavily on their minds.  With that being the case, they will have a mentally easier time finishing strong.

Before you read further, I know that I have a bias towards the Utah Jazz.  That bias may have something to do with the record I came to with them,  but I really tried to be unbiased.  They area terrbile road team at 14-21 on the season and have gone only 6-4 over their last 10 with 3 wins and 4 losses on the roard in that stretch.  Those wins came over Toronto, Atlanta and Oklahoma City, not exactly a murder's row. 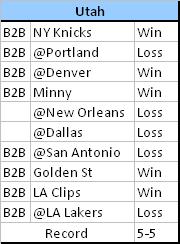 Coming to a 5-5 record was just the logical conclusion.  I have them winning their 4 home games and going 1-5 on the road.  Even then I'm saying they beat a Denver team that beat them by 20 the last time the Jazz visited Colorado.  They can beat New Orleans and Dallas on the road, but I don't think they will.  They cannot beat San Antonio or Los Angeles on the road. It is really as simple as the Utah Jazz are a bad road team.  Not a mediocre road team, a bad one and they face 6 playoff teams on the road to end the season.

The Houston Rockets have gone 7-3 over their last 10 and 16-4 since the All Star Break.  Without Tracy McGrady they have exceeded my expectations to a large extent.  And I'll get this out of the way, the Rockets would be better with a 100% healthy TMac, but are better now without a 60-70% McGrady.  They are also better without Rafer Alston, no matter how you want to look at that. 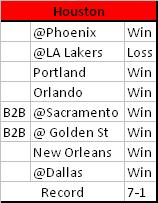 The Rockets could, and really should, finish with a 55-27 record.  They are better than every team they face besides the Lakers who they play on the road and the Magic who they get at home.  This would be identical to last season finish, but without the 22 game winning streak.  A 7-1 finish does include a few big road wins in Phoenix and Dallas but this team is up to the challenge.  The Rockets match up well with both teams and have road wins at both locations already this season.  We're going to see on Wednesday exactly where the team stands to end the season.  A win in Phoenix will get them continuing to trend in the right direction.  A win in Los Angeles would make my head explode with possibilities. 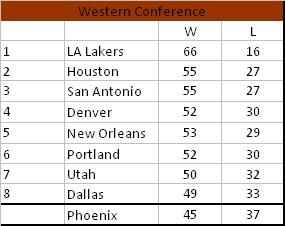 Denver wins the Northwest in the third tie breaker

And last, but not least, the Rockets win the second tie breaker to take the 2nd seed.

And that's right folks, this scenario has the Rockets playing the Jazz in the first round.  Let's toss out a little prayer and hope that the Jazz can find a way to win a couple of more road games, or at least lose a couple of home games.  I assure you, I don't want anything to do with the Jazz in the first round of the playoffs.  They are not a better team overall than the Rockets, but head to head they are the better team.

I've seen a few people do this analysis in the Fan Posts section.  If anyone else is interested, let's put them all in the comments here.  You can go into as little depth, or as much depth as you want.  If you have done it in Fan Posts, that's great!  Just toss a link to it in the comments here.  I'm very happy to have anyone and everyone doing Rockets analysis and previews/recaps in Fan Posts, keep up the great fandom!