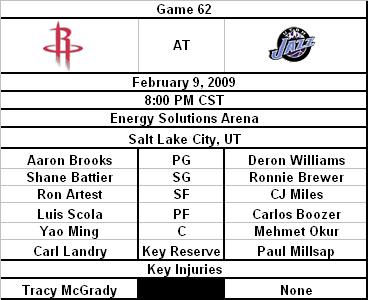 Point Guard
Brooks - Running the offense with a lot of authority, it's been key that Adelman has made it be known that what Aaron calls, goes.  His shooting is not thre right now,but he has the ability to get it there, the minutes are just weighing on him right now.  Is this the game that Lowry gets a bit more minutes, maybe even splitting them 24 to 24?
vs.
Williams - Averaging 18.6 PPG and 10.5 APG, that's just sick.  Then look at what he's done versus the Rockets 23 PPG and 11 APG, so he gets better against us.  That doesn't bode very well considering that Aaron Brooks has to find a way to guard him.  Here's the thing though, Aaron is fast enough to stay in front of him.  Obviously the Jazz will throw illegal picks like they've done since the caveman days, but ABZ may actually be fast enough to get around that pick.  Color me intrigued.
Edge: Jazz

Shooting Guard
Battier - His shooting has to get better for the Rockets to win tonight.  I expect him to hit 2 big 3 pointers, hopefully only shooting 3-4.  I'm not sure what happened to his shot, it's never been great, but it's always been dependable.  His defensive intensity has been insane though, so we can really overlook the shooting for the most part.  You almost can't score on him right now without shooting 20+ times.
vs.
Brewer - He has been on absolute fire during the Jazz 8-1 run over their last 9 games including tonight.  He's been arguably the reason the team has taken off again.  That's scary news for other teams around the league.  He even lit up White Pills the last time they played us (in a loss naturally).  He's going to be a great player, it angers me every day that the Hornets skipped him in the draft.  Of course he's a dirty filthy Piggy, so he deserves having to live in Utah.
Edge: Even - Brewer is better than Shane overall, but the match-up is really White Pills on defense

Small Forward
Artest - This is the first time Ron Ron has gone to Utah as a Houston Rocket, and after this:

I'm giddy to say the least
vs.
Miles - He's their fifth starter, so that's actually good for them.  He's not anywhere in Artest or Battier's class and he's not particualry good at any one thing.  You can see him turning his game around though and becoming an NBA player.  I'm very happy that Boozer is going to blow this team up in the offseason.
Edge: Rockets

"Everybody is going to be thinking about Yao," said Scola, averaging 15.1 points and 11.8 rebounds while shooting 56.5 percent during the Rockets' 8-1 surge. "We need to punish them for that. So, hopefully, they'll stop thinking about him. That's what we've got to do."

According to a source who participated in the meeting when the Cavaliers decided to allow him to become a free agent, Boozer told Gund, "If you respect me by not picking up the option, I'll show trust and loyalty to you by signing with you."

Center
Yao - The Utah Jazz are his worst matchup in the league on the defensive end, there I said it.  They are one of his best matchups on the offensive end.  Why does no one get this?  I feel like I'm taking crazy pills and invented the piano neck tie!  And with his new found ability to block shots, I think this game will finally swing in his favor on defense.  Now we just need for the NBA to get it's referee's heads out of their respective butts.
vs.
Okur - I hate this guy more so than any other player on the Jazz since Karl "I'm hunting little Mexican girls and statuorily raping 13 year old and don't recognize my own children as mine" Malone.   I'm also sick of hearing about him "outplaying Yao".  Neither guards the other with any consistency and it's so stupid to take what is effectively tall small forward and pretend Yao should be able to guard him.  You wouldn't ask Yao to guard Dirk, would you?  So why is it that people expect Yao to go out to the three point line for Okur?  It's silly, the Rockets need to employ the zone more against the Jazz and it will "fix the glitch"
Edge: Rockets

Injuries
Houston Rockets
OUT - This is the last time I put it down, McGrady is out for the season
Utah Jazz
OUT - None