Recap and Rant: Led by Williams, Utah slips past Houston, 101-94

Share All sharing options for: Recap and Rant: Led by Williams, Utah slips past Houston, 101-94 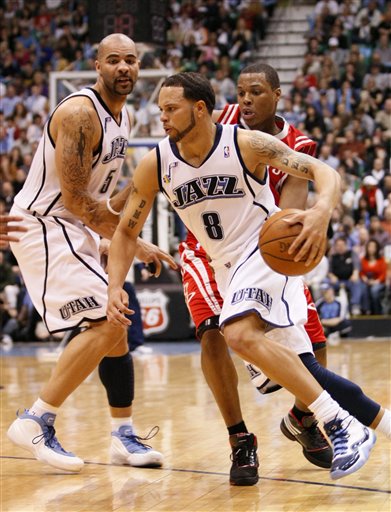 Typically I get really pissed off when we lose to Utah.  And belive me, I'm fuming furiously as I aim for keyboard keys, but in a more accepting manner.  Like, I kinda/sorta think we played quite well tonight, considering it was off a back-to-back, against a rising team, in the hell-hole of all hell-holes, and on a night in which Aaron Brooks showed up to play for five minutes, then proceeded to slowly evaporate to the bench before possibly getting Wally Pipped by one Kyle Lowry.  Ugh.  Okay, maybe I am as pissed off as usual.  But it's not because we didn't play our asses off, because we did, but more because I generally hate the Utah Jazz.

Do Jazz fans know what basketball is?  Contrary to their belief (the collective belief of Energy Solutions Arena's inhabitants) it is not a combination of rugby, MMA, and British "diving-is-a-bloody-part-of-the-game" soccer.  It's basketball, and flopping and taking charges off the ball isn't a part of the game.  Jazz fans consider it an integral part of the game, and they boo their butts off whenever a call isn't made.  And quite frankly, they can be pretty classless at times.  I know we all have our moments as fans, but the people I see on TV in that arena when I watch a game just appear to be nothing but jerks to the opponent every single night.  But back to the basketball vs. flop-sketball argument.  Here's what angered me the most: When Yao Ming came off the court in a typical Shaquie Chan rage, it wasn't because his sixth foul was on an elbow to Boozer or yet another incredibly stupid charge attempt of his own, but because frickin' Ronnie Brewer picked the spot on the floor where Yao would be next (which happened to be a whole first-and-ten away from the ball) and waited for the Ming Dynasty to collapse on him.  What a pathetic way to play the game.  Pathetic.  We'll go sign Carlos Tevez before our next Jazz game and have him run around solely trying to get his ass kicked.  But wait - Sloan doesn't need professional soccer players to flop.  He gets professional floppers to flop!

Do Utah players know what jerseys are for?  They certainly aren't for tugging, and, Andrei, are not chew toys.  Yet, for the entire game, they were grabbing our team indicators like flirty, single, 30-year old women grab shirtless men when they go on a girls night out to Chippendales.  And I know it's common, I know if I were to send out a questionaire to players everywhere, they would all say that jersey-tugging happens all the time.  But this is unfathomably obvious!  How can it not get called more often?  I was able to see it from my 10 inch Toshiba piece-of-shit television screen, and yet, referees can't see it in the game?  Deron Williams?  Mehmet Okur?  Matt Harpring?  Boozer?  It's laughable how much their hands move like buzzsaws around Rockets players.  And of course, Jazz fans are going to point directly to the boxscore and start whining, "OH, but we had 30 billion (eleven) more fouls than they did and they shot 6 trillion (nine) more free throws and blah, blah, blah."  Hey, if you swipe like headless grizzly bears all night long, you may draw a few goddamn fouls.  29 is sure low for the amount of fouls, called or uncalled, this team vomits every night.  Oh, and speaking of every night...

How come Utah always gets the back end of opponents' back-to-backs?  Maybe that's why they are so good at home and so pedestrian on the road!  Every time a team makes a trip to the Midwest or has a back-to-back with the Jazz in general, the Jazz are always rested from an off-night.  It's happened ELEVEN times this season - eleven times in which a team has come into Salt Lake City after playing a game the night before.  Unless you're the Mavericks, that's a crapload of effort exhibited before having to face one of the "elite" teams in the West.  Don Chaney offered up a reason in the post-game show: "The NBA says it's because of proximity and scheduling conflicts."  And that was the answer Don got from the NBA after he himself complained about it years earlier.  What a rotten deal for beer-drinking basketball players everywhere.

As for tonight's game itself, we could not stop Deron Williams.  I tip my hat to the guy - he's a great player, and the second best point guard in the Western Conferen--hold up a second, Yao's on the post game interview hot seat.  Pardon the interruption, but...

UPDATE! Quote of the Year from Yao Ming: 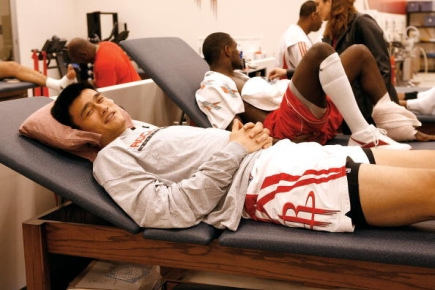 I had 2 offensive fouls tonight, 3 last night, 2 against Minnesota, and you can go check how many I had from the week before.  Every time a player is on the ground or feels like taking a rest on the floor, it's an offensive foul on me.  Thankfully, I don't have to worry about floppers next game with Shaq.

I LOVE IT, Yao.  Talk, talk, talk!  Isn't it true, though (all of you are distracted by spontaneous thoughts consisting of "didn't Shaq flop last night...")?  Every single damn time Yao touches someone, it's an offensive foul.  I know, I know - he usually puts a shoulder into the guy, but most of the calls aren't for the shoulder.  Instead, he'll be whisteled for making slight contact with a guy in the lane or on a rebound.  Of course, the guy goes flying and makes it look like a huge deal when it really isn't, and thus, Yao gets pissed and speaks some of that Qin Wisdom.  Keep complaining, pal.

Right - we were blabbering about Deron.  He got into the lane at will tonight, as Utah runs a nasty (pun?) pick and roll.  And as usual, he was mister big shot, hitting a nice jumper over Lowry to basically seal the deal in crunch time.  He's one of the best players in the game, and despite my hatred for him and his team, I can't bash his abilities as a basketball player.  That said, I can bash Matt Harpring, the dirtiest dirty on the entire team.  But I need to start talking about the Rockets.

I hate this matchup every time we play Utah.  They don't have that dominant wing man that we can just shut down with Pinky and the Brain (boom: first usage).  Ronnie Brewer is a good, young player, but by no means is he worthy of an in-depth statistical report courtesy of Morey's Minions.  The Jazz's offensive strengths don't cater to our defensive strengths.  They have a physical point guard, two jump-shooting big men, and no quality wing players to neutralize.  It's annoying as hell, and unless Lowry, Brooks, Yao, Scola, and Landry play better defense, it's going to continue against Utah.  I'm also a little dejected that I can no longer simply place all of the blame on this man: 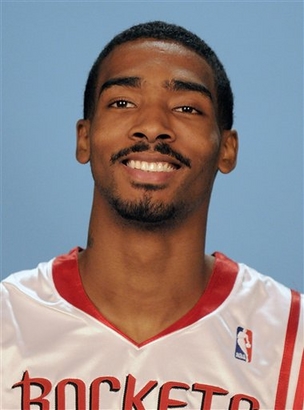 I really hope people don't reference this as  "yet another road loss" for the Rockets.  This game doesn't fall into the same category as our other road struggles.  This was one hell of a performance by our guys, especially on a back-to-back in a tough arena against a good team that relies on hustle to generate points.  We needed to play hard to keep this close, and we did just that.  The ball just didn't bounce in our favor.  But enough cliches - time for some Yaozing.

Yao Ming.  Tough night for him in general.  The shot was not there, but it's never there against Utah for some reason.  And there's no excuse either, even if he gets tugged on constantly.  But what Yao lacked in his shooting ability tonight, he made up for in hustle and passing.  Big dude had 6 assists!  More than Midget Brooks!  He was constantly kicking the ball out on triple teams, and constantly looking for cutters in the lane.  If only he could have rebounded better.

Speaking of rebounding, what the hell happened?  27-9 in the first half - that's how bad we got outrebounded.  Boozer had 13 boards of his own by snacktime.  It's something that we usually control, but in tonight's case, against some of the better rebounders in the league in Milsap and Boozer, we just couldn't pull the ball down.  We did a much better job in the second half, but it was getting embarrassing until we finally started boxing out.

I'd better just get to the recap.

Kyle Lowry -- Onions galore for Lowry: he was a total beast tonight.  He drew fouls like Kobe, made his free throws, and single handidly brought us back into the game.  I never thought he could score like that, but his finishing ability at the rim is uncanny.  He takes contact like a fullback and just goes right up anyway.  I am loving this kid more and more as the season goes on.

Ron Artest -- Ron was a Stat All-Star tonight, scoring 25 points, dishing out 5 assists, and grabbing 5 rebounds.  He also hit five three pointers.  His free throws still need some work, and his tendency to just dribble around was quite annoying, but he had a good overall game.  Hopefully we'll be able to use his defensive talents next time around.

Yao Ming -- 19/7/6/5 is a pretty solid night, considering how poorly he boxed out and how inconsistent his shot was.  But he didn't miss a free throw, had a key and-one down the stretch, grabbed a bunch of late offensive rebounds, and hustled like a maniac.  He was visibly tired, whether it be the Utah air or the back-to-back toll, and it's something we had to deal with.  But Adelman chose to stick with him, and he ended up fouling out.  Nevertheless, it was the right choice to leave him in there - you don't put your all-world player on the bench with 3 minutes left to go in a game.

Aaron Brooks -- He legitimately angered me tonight.  ABZ came out of the gates flying, and then, suddenly, he was lost.  He was aggressive, but out of control.  He kept losing Deron Williams.  He wasn't distributing, and was dribbling off the shot clock constantly.  His shot wasn't falling, and while he only took ten tonight, many of them were ill-advised.  Aaron needs to quickly get his act together, or else he may be back on the bench soon.

Shane Battier -- He played hard, drew a charge, and yada yada yada, but he didn't make a three and only had four points.  Shane MUST be better offensively if we are going to put points on the board.  His outside shooting is vital to our team's success.

Von Wafer -- It was never going to happen tonight.  Never in a million years 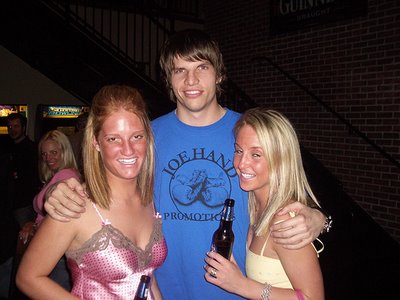 Worrell: [of the officiating, following a no-call after Yao was held on a jump-ball attempt] Well...that's what you get here.

Bullard: [following a flop from Okur] Oh...oh no, he got shot, check for snipers in the concourse area.

Bullard: "The refs don't want to blow their whistle too often, but when you play the Utah Jazz, you could call a foul on every single play."

Aaron Brooks got called for a foul.  He didn't like it, so he talked to the refs.  The problem with this was that he chose to have a ref chat as the ball was being inbounded.  Result: wide-open three-pointer is nailed by Deron Williams.  Whoops.

Next Game: Friday vs. Phoenix.  Yao vs. The Shaqtus.