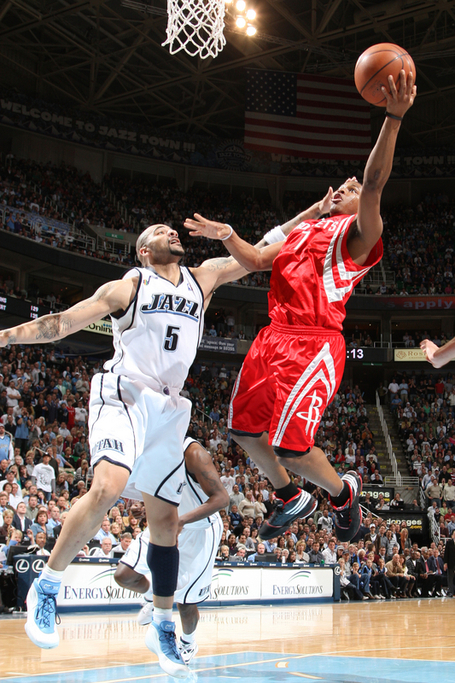 Is it possible for me to jump on the Kyle Lowry fan-wagon too early?  Yes; this post should serve as a decent indicator that I'm going to be blowing sunshine up the guy's ass for many games to come.  And you can't disagree with me - that's against the rules.  Granted, you do have one excuse not to be sweating enthusiasm whenever Lowry's in the court, that being that you somehow missed last night's game.  If that was the case, take a look at Bulldog's play-by-play to end the third quarter.  I nearly fist-pumped myself in the face watching this unfold:

The score went from a 71-59 Jazz lead to 71-66 lead in less than two minutes.  During this interval, it's safe to say that our boy Kyle Lowry was "Greatness."

Now, I realize that Lowry isn't the most graceful of players, like CP3 or that Canadian fellow.  Bulldogs aren't graceful by nature.  Bulldogs are, on the contrary, short, stocky, and the premier rough-and-tough badasses of all canine species.  Like Uga in the video below.  We like it when Lowry does this to the opponent:

Kyle went Bulldog on the Jazz last night.  He jumped off his leash and had a field day in the lane, drawing fouls at will (as difficult as it is, right?) and, unlike the rest of our bunch'a bums, he made his free throws.  Of all the players Utah fans thought would hurt them, they never expected Lowry.  For those two minutes of the game, fans were stunned.  Thoughts like "damn; nobody told me to make a 'Lowry Sucks' sign!" floated throughout the crowed as Kyle put on a show.  It was an ugly, unwatchable show, but the results were glorious.  Gold stars and onions galore for Kyle.  And maybe a few drinks I suppose.

But, for a second, let's hold the champagne and do what we bloggers do best: scenarios.  Perhaps a scenario involving a Bulldog vs. Midget battle for the starting point guard position?  I'm game.  Maybe not to the degree of my last point guard battle post, because that wasn't a fair assessment with Rafer Alston in the discussion.  Luckily, the post wasn't a complete disaster as I came out victorious the minute Brooks assumed SPG duties after Alston skipped all the way to Disney World.  I'll keep this much more brief.

Forget style points and ESPN The Mag cover gigs for a second.  Does it really matter if you start or not when your backup is just as good as you are?  No, and especially not in this case.  What does matter is who is in for the majority of the game.  In some cases, who plays more may simply depend on who is hot that night.  For a quick comparison, Brooks and Lowry are two much different players that, when mentioned in the same conversation, are said to be of the same overall caliber.  I agree with that statement for the most part.  They're about the same defensively, with Lowry getting a slight edge because of his Bulldogginess.  What Brooks lacks in the ability to finish at the basket, he makes up for in outside shooting ability.  Lowry is the exact opposite; he's a monster around the rim and a sixth grader behind the arc.  Not to insult aspiring sixth grade shooters everywhere (and especially our loyal sixth-grade readers), but Lowry's shot looks like it was fine-tuned by a part-time P.E. teacher.  However, it will go in at times, and he does have an effective jumper inside the three-point line.

Actually, hold up.  Let me re-think the possibility of stating that Lowry could/should start over Brooks.  What I don't want to do here is turn Lowry into Von Wafer. To explain: about a month or two ago, we all got on Wafer's train and practically, as Dennis Green would elegantally say, "crowned his ass."  Then he became human and, thankfully, is no longer placed in the same category as our other young guns, such as Lowry, Brooks, Landry, and Scola.  He's still a lethal shooter, but he's never going to take over games like he was earlier in the year.  Now back to Lowry: while he hasn't been spectacular to any degree, he has played very efficiently and hasn't anything too detrimental to our offense or defense.  In eight games with the Rockets, Lowry has yet to give us, the jury, a good reason to convict him of anything.  That's not going to last very long based off basketball's Laws of Nature.

In fact, I'm going to make a complete 180 here and put any notion of Lowry starting to bed.  Forget the idea for now.  We need to see a few bad games out of him first, see how he responds, and then re-evaluate.  The only reason we are even having this discussion, and the only reason we ever had the Alston/Brooks discussion was because we had seen the then-starter screw up more than the young padewan.  Brooks has been off-target while on the court of late, but he can also get on-target, and he has more experience with this team than Lowry does.  While I absolutely love Kyle's game, we need to wait a while longer before even thinking of the notion that he should start for us.  There; my 180 is complete.

Kyle Lowry is a boss.  That's really all you need to know.  Wasn't this supposed to be about not wasting space...?