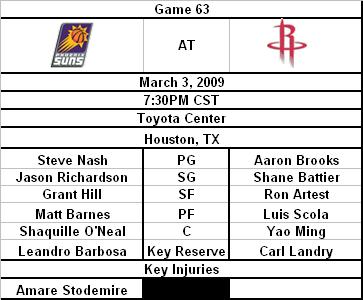 I'm a bit pressed for time today, so we'll do this a little different.  I'm just going to write the first thing that comes to mind about each player
The Match-ups:

Point Guard
Brooks - Lighting fast, needs to think less about his shot, it will go in more
vs.
Nash - I'd pay a large sum of money to get to hang out with him and Dirk on a normal basis.  Great point guard, transcendent partier
Edge: Suns - It's freaking Steve Nash

Shooting Guard
Battier - The king of the "off the stat sheet stats".  He has to remember how to shoot though, has to.
vs.
Richardson - He's a phenomenal 3rd player, and with a healthy Stoudemire this is a really tough team to play when they run like they have been lately.  I still do not understand why he and Baron Davis are not still Warriors.
Edge: Suns

Small Forward
Artest - Crazy Pills, part of the White Pills tandem (Pinky and the Brain sucks), you can see him ticking like a bomb on occasion.  I thoroughly enjoy watching that.  I have a special place in my fandom for him, he does so much stuff that he never gets credit for.  Plus, has anyone that is as bad of a dribble as he is ever been able to control the ball so well?  Seriously, I've seen 5th graders that dribble with more control, yet he rarely loses the ball (for good) on a drive.
vs.
Grant Hill - I like two Duke players in the history of their program, this is one and the other happens to play for the Rockets.  He's a good guy and was a great player.  Injuries took their toll, but as usual, the Phoenix doctors could get a cadaver to put in 15 minutes a night.
Edge: Rockets

Power Forward
Scola - The Argentinean Slayer, I love him, I've liked exactly 5 Rockets in history as much as him (Hakeem, Yao, Horry, and Maxwell who I have cut all fan ties to now)
vs.
Matt Barnes - I like his hustle, but he's a dirty player in my opinion.  The league has a lot of those guys these days so he blends in.  I don't dislike him, but I don't really like him either.
Edge: Rockets

Center
Yao - The hardest working player you've ever seen.  He won the genetic lottery with his height but not his skills; he earned all of those with hard work day in and day out.
vs.
Shaq - A giant baby, never grew up because he never had to.  He continually puts his foot in his mouth and can never give credit after the fact to anyone but himself.  A top 5 center of all time (1.  Wilt 2.  Kareem 3. Hakeem 4. Shaq 5. Russell - I won't argue that) who was the most physically gifted of all.  Look at that list, he was the inarguable best physically yet he couldn't get all the way there because his work ethic is pathetic.
Edge: Rockets

Injuries
Houston Rockets
OUT - None
Phoenix Suns
OUT - Amare Stoudemire

My Prediction: I found it interesting that ESPN's Accuscore thing had the Rockets as 73% favorites and the spread is -7 for the Rockets.  I like all of that, but I'm a homer so of course I do.  Rockets win 113 - 104