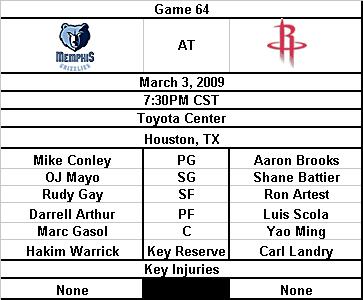 Point Guard
Brooks - I'll be completely honest, I didn't think Aaron Brooks would score 30 points in a game ever in his career.  Now I'd like to see that come down to 15-17 and toss in 8-10 assists
vs.
Conley  - I've never been impressed, I felt like he was a product of playing with Greg Oden in college
Edge: Rockets - Brooks and Lowry are both better than Conley.  Maybe not by much, but better nonetheless

Shooting Guard
Battier -
vs.
Mayo - Now that I've seen both Rose and Mayo, I feel completely confident that Rose is the better player and will have the better career.  Mayo is good, but he has great player on a terrible team his whole career written all over him.  That is unless he decides to take over for Kobe in LA in 3 years...
Edge: Grizzlies

Small Forward
Artest - I'd like to see him get up for this game.  He's been really good in the big games, but I want him to be all over Mayo and Gay and lock them both down.  If that happens, the Grizzlies will lose by 20
vs.
Gay - Not that good, there, I said it.  He's a third best player on a good team.  if you would rather have him than Shane Battier, you're un-American
Edge: Rockets

Power Forward
Scola - A nightly double-double machine.  I can't wait for him to get his Utah revenge in a few weeks.  Gets up for games no matter the opponent.  Memphis is the type of team he goes 22 and 15 against
vs.
Arthur - Great college player who I can't tell if he has the desire to be an NBA player.  He should average 10-12 points and 10-12 rebounds per game in his career, but we'll see
Edge: Rockets

Center
Yao - Should have a field day against the Grizzlies, but I think he's starting to get a bit tired.  His legs aren't under him and this is a really tough stretch of games in a short amount of time.  Here's hoping he sits out the 4th quarter.
vs.
Gasol - I like him better than his brother, but now he's basically who he's always going to be.  Maybe he'll average a few more points or rebounds, but this is about his ceiling.  This Grizzlies team is full of decent to good players that aren't ever going to be great.
Edge: Rockets


My Prediction: I'll be there for my son's first Rockets game.  I'm looking for an epic beat-down.   And thinking forward to the Denver game, what is it with a home game followed by a game the next day in altitude?