Mini-Recap of Rockets 93-83 win over Memphis, along with a look at our insane schedule

Share All sharing options for: Mini-Recap of Rockets 93-83 win over Memphis, along with a look at our insane schedule

I forgot to recap the Suns game.  It slipped my mind.  Thankfully, this is a blog and not a newspaper, so I hope that I won't be getting fired.  Then again, if I was writing for a newspaper, chances are, I probably wouldn't have a job anyway.  Times are tough indeed.

I'm going to be lazy and do a mini-recap of tonight's game versus Memphis.  Send all complains to grungedave@yahoo.com: 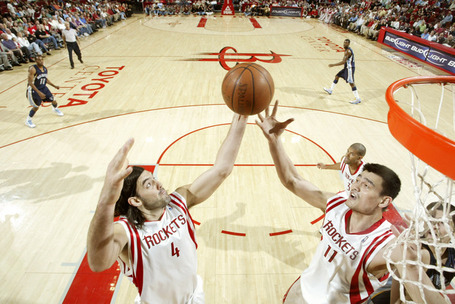 Kyle Lowry -- 8 points, 9 assists in 28 minutes of playing time against his former team.

Brent Barry -- Our sharpshooter off the bench took only one shot in 10 minutes.

Tonight's Phantom Call came in the third quarter.  I looked down while it happened, so I missed it, but from what I heard, he was pushed going up for a rebound, and he and his opponent got tangled up.  Everyone in the stands waited for a whistle to be blown in Scola's favor.  Instead, he was called for the foul.

Next Game: Tomorrow night at Denver.  Get Yao an oxygen mask.

Ok.  That's the recap.  But we have more pressing matters to get to here.  Like our ridiculous upcoming schedule:

And that's only the rest of March (I left off the Clippers).  Outside of the Minnesota game, it's a guantlet.  I may touch on this more later, but I think if we could have a few goals in terms of coming out of this, it would be:

Optimist's Prediction: 7-2.  We lose @ San Antonio and at home to the Lakers.

Pessimist's Prediction: "0-9. Carl Landry's knee breaks.  Yao gets kneed in the crotch by Utah's mascot, and then again by Matt Harpring.  Aaron shoots 20 shots per game.  Von gets hung on five straight dunk attempts.  Shane refuses to leave Minnesota.  The Kracken takes Rawn out for some fun in Denver.  And I die in my sleep.  FML."  - Posted by Ricky A.

Ok, really, that wasn't even funny...Pessimist's Prediction: 4-5.  Wins against Charlotte, Minny, SA, and NO.