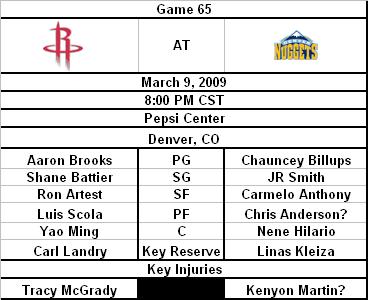 Point Guard
Brooks - All over the place as a starter, but it has been significantly more good than bad.  I'm looking forward to a few more 22 and 10 games
vs.
Billups - Since joining the Nuggets he's having one of the top 2-3 seasons of his career.  He's 6-22 in his last two games against the Rockets.  In the one previous game, a Denver win, he put up 28 points.  I think he'll be somewhere around his norm of 18.
Edge: Nuggets

Shooting Guard
Battier - 1-20 in the month from 3, ouch, very ouch.  Luckily it really hasn't affected the team.  Now we need him to throw some of that "this is the reason I'm a starter" defense on JR Smith tonight.
vs.
Smith - Saw recently a question about the Rockets going after him in the off-season.  I like the idea, but there is no way they can afford him.
Edge: Even?  I really don't know.  Smith is clearly the better individual player, but against Shane?  I think Shane destroys athletic guys like him.

Small Forward
Artest - Is it just me, or does everyone else love the "Adventures of Ron Ron" stuff they do at Toyota Center?
vs.
Anthony - I thought he would be better, I really did.  I didn't think he'd be Lebron good, but I thought he'd be in the discussion.  He's still a star, but there is just something missing.
Edge: Nuggets - As always, this is the big match-up.  Does Ron decide to take over on defense or try to take over on offense.  The first option has just about a 100% hit rate, the second is more 50/50.  He can score with Carmelo (not as well, but with), but it's not the right choice for tonight.  Hopefully we see him just lock him down

Power Forward
Scola - MACHINE
vs.
Anderson? - With Kenyon Martin possibly out and the Johan Petro experiment likely over, I think The Birdman will fly.  Fly right into a buzz saw
Edge: Rockets

Center
Yao - I don't want to sound like a little girl talking about how great her barbie dolls were and all I have is gushing praise for his play last night.  Hopefully his inexplicable court time in the 4th quarter doesn't haunt the Rockets tonight.
vs.
Hilario - I like watching him play.  It would have been interesting to see what he became if he was never injured.  Still only 26 but I think his chances at greatness are over.  He is still a good, solid player, but I wouldn't want him as my starting center.  Starting power forward on the other hand?  That would work, though I'd take Scola over him in a heartbeat.
Edge: Rockets - If they put Johan Petro on Yao tonight, I don't expect Yao to miss a shot

Injuries
Houston Rockets
OUT - None
Denver Nuggets
OUT - Kenyon Martin and Anthony Carter have missed the last three games.  I have not seen any indication that they will play or that they will sit out.  (Pick Axe and Roll?  Roundball Mining Company?  Anything?)

My Prediction: Rockets lose a hard fought game.  Back end of a back to back in altitude.  We're not a good road team and the Nuggets are going to be angry after losing to Sacramento last night.  There, you happy?  I finally did it