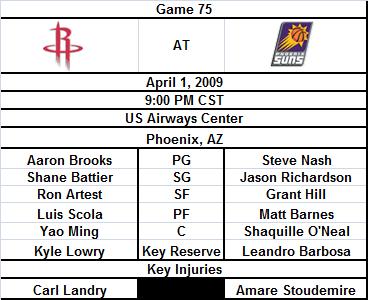 Point Guard
Brooks - In the last two games he has come out of his funk.  His scoring is better and he's not making as many bad decisions.  That's not to say he's been great, but he's a second year player and I think we forget that sometimes.  He still has a long way to go to be consistently considered a top half PG, but he has the talent and the desire, so hopefully he gets there.
vs.
Nash - He has noticeably dropped off this year, but is still clearly a top 10 point guard.  I put him 7th on my list behind 1.  CP3 2. D-Will 3. Tony Parker 4.  Devin Harris 5.  Chanucey Billups 6. Jameer Nelson.  That's still very good company.  And he's a 49% shooter, that's pretty special out of your point.
Edge: Suns

Shooting Guard
Battier - Three double digit point games in the last four.  I guess he's reliving his Duke glory days and playing hard in the tournament.  Honestly, I think Shane is just feeling better and has finally gotten out of his own head.  He's not hesitating on shots and he's not measuring them anymore.  Over the past 5 games he's 16-22 overall and 10-15 from the three point line.  That's going to get the job done a lot.
vs.
Richardson - He takes more shots per game than Yao Ming, yet scores 2 point less a game with them.  He's a good player that probably doesn't get the credit he deserves.  I've never thought of him as a team guy though, and maybe that has a lot to do with it.  Still, I can't help but like him, it's really a shame he and Baron Davis didn't get a few more years together at Golden State.
Edge: Suns - This is more of a one on one award in this instance as I think Shane means a lot more to the Rockets than Richardson means to the Suns.

Small Forward
Artest - We need you Ron Ron, please stay within the offense tonight, because if you don't, the Rockets are going to be in big trouble.  The trick to beating high paced teams like the Suns is to operate your offense to the utmost degree and make them play catch up based on your efficiency.  If Ron goes Crazy Pills like he did a few times in Utah it could be a long night.  He hasn't particularly played well in the two Phoenix games and in the second it almost bit the team.
vs.
Hill - Every day that the Phoenix doctors keep Grant Hill from falling apart like Humpty Dumpty is a win for them in my opinion.  And since he's one of two Duke players ever that I don't hate, I'm glad for him.  I still wonder sometimes what would have become of Tracy McGrady if Hill had not been made of glass for his entire Orlando career.  Would McGrady be considered "the consumate winner"?  Because they would have won, that's not even in doubt.  He's been a welcome addition in Phoenix and is an absolute steal at under 2 million dollars a year.  But he's 36 years old and I don't see it lasting past maybe next year.
Edge: Rockets

Power Forward
Scola - Here's a huge edge for the Rockets that they need to take advantage of.  Matt Barnes is a hot head and Luis Scola can get under his skin.  Scola needs to get shots tonight, preferably at the detriment to Artest's number of shots.  Barnes is a good defender but Scola's drive will play right at him well.
vs.
Barnes - I don't like you Matt Barnes, I never have.  You don't play the game in a way I find pleasing.  That's really all I have to say other than if I was a Suns fan, you would be my Rafer Alston.
Edge: Rockets

Center
Yao - Time to shut everyone up forever about your career against Shaq, Yao.  Tonight is the game of your life when it comes to your legacy as a center.  Win this and you've effectively knocked Shaq out of the playoffs for the first time in his entire career.  That's no small feat, though I'm sure ESPN will ignore your roll in it.  It's the end of the Shaq era in my opinion, he's solidly the 5th best center of all time.  It's your turn Yao Ming, let's prove it to everybody.
vs.
O'Neal - He's had a good season, though it is extremely overrated by the media.  He hasn't been "resurgent", he's been opportunistic.  The Suns score a lot of points and shoot a lot of shots, he's not positioning himself for rebounds on a night in and night out basis because he doesn't have to.  Steve Nash is adding 4 artificial points to his stats a game.  Not to say he hasn't been good, but he's not Yao, Howard or Jefferson anymore.  Plus I keep hearing him say that Bill Russell is better than Wilt Chamberlin and that's infuriating.  I have absolutely no respect for your basketball knowledge if you really believe that is true.
Edge: Rockets  - It's not 4 years ago anymore.

Injuries/Suspensions
Houston Rockets
OUT - Carl Landry - He was at practice on Monday but did not practice.  Here's hoping he's back in the game sooner than later
Phoenix Suns
OUT - Amare Stoudemire is still out.  Leandro Barbosa is slated to return tonight versus the Rockets.


My Prediction: Rockets win, it may not be pretty, but I see the guys pulling this one out on the road