Share All sharing options for: Random Rockets-themed Thoughts at 5pm on Wednesday

It seems like forever since the Rockets have played a basketball game.  The week almost had an offseason feel to it.  Then I saw that the Spurs lost to the Durants last night.  Thank you, KD!  And then I saw that the Jazz were once again scared to leave the friendly confines of Utah... and were pounded by the Blazers in Portland.  Haha.  You suck, Utah.

Tonight the Rockets play only their second game in nine days.  Quite a long layoff, but it's good for Yao and Shane and Crazy Pills and everyone who has been a little bit banged up of late.  I'm sure Ricky even found a little nap time in the interim.

That said... today the team has to travel to Phoenix to play the FatAss and his trusty sidekick the Canadian.  Watch out for Nash charging at you with beady eyes and his hockey stick or whatever he uses, Aaron Brooks! 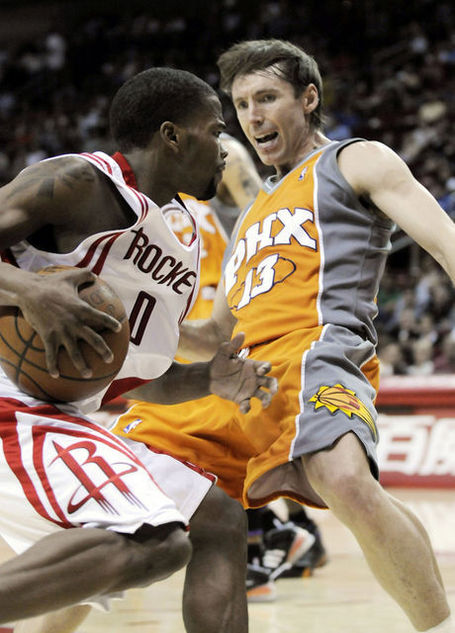 As of today, the Rockets somehow reside in 4th place in the Western Conference.  Behind Denver and the Spurs (who hold a division record tiebreaker for the moment).  Denver is one up in the win column.  But Denver sucks.  This confuses me.  I do not foresee Denver staying ahead of Houston when the regular season ends next week.

The Rockets absolutely must take care of business tonight.  Please do not resort to needing last minute layups by Aaron Brooks.  I also do not want to watch the good guys continue to botch the pick-and-roll defense.  Phoenix is at the point where they might be mailing it in.  The moment the Rockets take the lead, I pray they finally step on the Suns' collective necks.  Enough with close games.

The games will be close enough when the playoffs begin.

Seriously though... how does San Antonio lose to the Durants?  That's almost as bad as Utah still not winning a road game against a .500 or better team in the West.  (Okay, that's actually pathetic of Utah... but not surprising.)

Let's go Rockets... take notes and don't make the same mistakes as San Antonio!  A win puts you up 1/2 a game in the division race.  This is important!