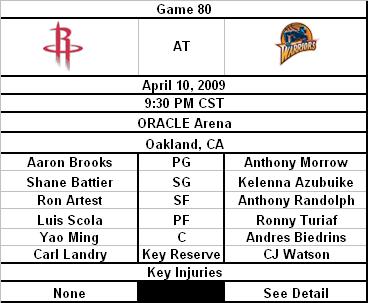 Point Guard
Brooks - He's going to need to play better.  Don Nelson isn't going to change his teams game even if he only has 3 players healthy.  So it will be important for Brooks to choose the correct times to run and the correct times (90%) to slow it down and control the pace.  He has it in him, I just know he does.
vs.
Morrow - It may be wrong, but come on, this is like the third guy down the roster for them.  He's had some good games with Ellis down for the count, but I just don't have any real watching experience of him.  For now I'd say, looks good, I'm interetest to see him play.
Edge: Rockets

Shooting Guard
Battier - He was back to his shooting prowess of late with a good game versue the Kings.  What do I need to say to keep this going?  Is there anything?  The Rockets will be so dangerous if he continues this in the playoffs that I'm getting giddy about it.
vs.
Azubuike - He can score in spurts with the best of them, okay, maybe not the best, but a level below the best.  Athletic and fun to watch, he's a good young player.  I think he would be a fantastic 4th player for a team and an okay 3rd guy, but right now he's the number two guy for the Warriors behind Biedrins.
Edge: Rockets

Small Forward
Artest - Oh wow, 10-18?  That didn't just happen.  He even took a lot of his shots in the flow of the offense and took the ball to the hole with authority.  It was nice to watch and then you realize that the Kings are terrible.  You know what though?  It's okay for Artest to not score efficiently, it's obviously not preferred, but his defense and playmaking more than make up for it.  It's effectively what I asked for from McGrady, if you are going to hoist shots up, you need to make up for it elsewhere, and Ron does.
vs.
Randolph - Everyone's favorite potential having power forward is an amazing player to watch.  I have him at the SF here because frankly, the Warriors don't have a PG and everyone is moving up a spot.  It's a guess, but I'm thinking it will be about right.  Randolph has been allowed to play, mostly because Nelson has absolutely no choice.  I haven't read anything that has said he is out of the doghouse, but they just don't have the bodies to not play him.  I'm not sure what to make of him, it's obvious he didn't have the work ethic or the discipline at one point in time, but who knows if he has it now and Nelson is just still punishing him.  Either way, he's good for 2-3 "Did you just see that moments" a night.
Edge: Rockets

Power Forward
Scola - Another game, another "One of the best third guys in the league" nights.  He's not a super star, but he does what he does night in and night out.  I <3 him, it's just that simple.  And I do not understand anyone that doesn't.  He has a reputation with some fans as a flopper which is just stupid.  He plays hard, gets in position and gets hit, that's not flopping, that's getting knocked over.  And if I see one more person (seriously) calling him a Euro, I'm going to just snap.
vs.
Turiaf - He'll likely be playing the 4 and the 5, specifically in the game to foul Yao 6 times.  I like him and think he's a great role player and one day he's going to be the 5th starter on a good team playing his role that goes deep.  He's just that kind of player, tough and does his job.
Edge: Rockets

Center
Yao - The Rockets have rolled to three straight blow outs this season by riding Yao to the victory.  He's been absolutely dominant in all three games and tonight should be no different.  This season his numbers aren't as impressive, but you'd be hard pressed to find a season where he really played much better.  His game has evolved and his defense has taken about a 15% step forward.
vs.
Biedrins - One of the two guys that in the past has given Yao some trouble.  He's not going to outscore him or stop him, but he can frustrate Yao.  This season Yao has handled him much better, effectively dominating the Warriors and Biedrins in the process.
Edge: Rockets

Injuries/Suspensions
Houston Rockets
OUT - None
Golden State Warriors
OUT - Jamal Crawford, Monte Ellis, Corey Maggette and Stephen Jackson are all out as of right now for the game.  Andres Biedrins just came back from an injury so it looks like he will play.

My Prediction: The Rockets will win this game in a land slide.  They saw what happened when they came out flat for a while last night and won't want to repeat the same.  Given the young players it could be a close game at the end of one, but by half time the Rockets should have this in the bag.

Check out the game preview at Golden State of Mind