Your Houston Rockets: 2009 NBA Champs. It's not that far-fetched. Really.

Share All sharing options for: Your Houston Rockets: 2009 NBA Champs. It's not that far-fetched.  Really.

The Rockets have two more games in the regular season.  They need to win both.  Tonight they play New Orleans (a team coming off a spectacular outing against Dallas.  Chris Paul's box score was sick.).  Then the Rockets finish off the season by playing Dallas ... a game that may have no meaning to the Mavericks.

Here are the Western Conference standings as of this morning:

If the playoffs started today, the Rockets would be the 4th seed in the West.  (Tie-breaker currently goes to San Antonio for division record.)  This is not good.  This is why we were so angry after the unexplainable losses to Washington, Toronto, Memphis (twice), Philadelphia (twice), Milwaukee, Chicago, Indana (twice), New York and the Clippers.  You realize the Rockets could be resting Yao this whole week.  But no... they had to make it difficult on themselves.

The Rockets need to acquire a top 3 seed.  Which requires us to win out.  Here's why:

New Orleans, Portland, San Antonio.  If the Rockets bump up to the 3 seed, they would likely face New Orleans.  This is good.  New Orleans may have CP3, but the good guys match up well with them.  This is winnable.

If the Rockets slide to the 4th or *gasp* 5th seed, they would likely play Portland or San Antonio.  Both of these teams are beatable.  Brandon Roy needed to make a 30 foot shot at the buzzer, otherwise the Rockets would already own the tiebreaker against Portland.  The Rockets beat San Antonio just a few weeks ago.

The Lakers are going to f--kstomp the Utah Jazz.  (You suck, Utah!  Haha.)  As a 4th or 5th seed, the Rockets would meet up with the Lakers in round 2.  The Lakers have been Chris Brown to our Rhianna this year.  4-0.  It's ugly.  We do not want to play Kobe and the Gang until the Western Conference Finals.  If at all (hey, L.A. could lose in round 2.  It's possible.)

If we assume the Rockets get a 3 seed and matchup with New Orleans in round 1... here's the likely Round 2 setup:

Yes, Denver.  I have no clue how Denver earned the 2 seed.  None.  Because the Rockets should crush the Nuggets, even if Denver has homecourt advantage.  So I would very much like this matchup.  Because the Rockets would win.  They would.  I will not accept arguments to the contrary because they would have to be nonsensical.

That would mean the Rockets could rather easily coast into the Western Conference Finals.  Where they would meet the Lakers.  Or, if there really is a God, maybe San Antonio.  Whom we can beat.

Then we could crush the Spurs (just like in '95!) and go to the NBA Finals.

Where I'm sure LeBron James will await.

Then again -- why be afraid of LeBron?  I think LeBron remembers exactly how good the Rockets can be when properly motivated (and having the services of a healthy Battier + Artest).  LeBron does NOT want to see the Rockets in the Finals.  He'll never tell you that, but we are on a short list of teams he would like to avoid. 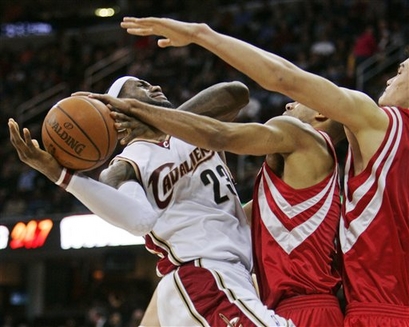