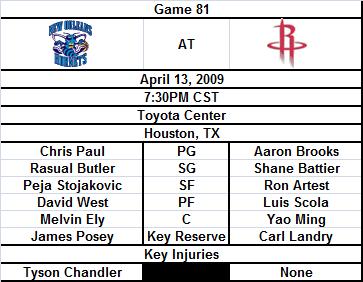 Point Guard
Brooks - Here's the hidden gem behind having a smaller PG on your team.  He's fast and capable of frustrating Chris Paul.  He's also capable of making CP3 believe that he can't do anything to him and therefore convince him that he has to take advantage from a scoring standpoint.
vs.
Paul - Now the above isn't to say that the Hornets aren't really good when he scores, because they are.  But against the Rockets defense it's imperative for the Hornets to have him facilitate the offense and not take too many shots.  Here's hoping he does not heed that advice.
Edge: Hornets

Shooting Guard
Battier - A little bit rougher of an outing against the Warriors than we have come to expect over the last 15 games or so, but most of them were not open looks.  He's still playing fantastic defense and his help defense on Paul and Stojakovic will be a key to the game.
vs.
Butler - He's hit or miss, but when he comes up big, the Hornets tend to win.  Shane Battier likely won't allow that to happen.  Against the Rockets he is averaging well below his season numbers and I expect that to continue tonight.
Edge: Rockets

Small Forward
Artest - He's been playing pretty well, save for 2 minutes in the Golden State game.  I don't know what went through his head.  Okay, that's not true "I'm Crazy Pills" went through his head.  That said, if that's the worst thing that's happened this season, I'm pretty excited.
vs.
Stojakovic - His back has been a problem all season, and it's still not completely healed.  He's a difference maker for the Hornets (as he would be with every team) and his three point shooting can be transcendent.  Peja isn't having a particularly great season shooting the ball, but I chalk that up to injuries more than age.  Though one does lead to the other usually.  It's important that he can play through the pain if the Hornets are to have any chance tonight or this season.
Edge: Rockets

Power Forward
Scola - Luis is coming off what may have been the best game of his career, with only the last game in San Antonio making an argument.  He scored at will and if the Rockets hadn't inexplicably gone away from him for about 10 minutes he could have put up 35.  He's a very good scorer and as always I'm convinced that the Rockets playoff run has three important parts since Yao Ming is going to get his.  1.  Ron Artest plays mostly within the offense 2.  Shane Battier can score 10 points a game and 3.  Luis Scola gets at least 10 shots a game.
vs.
West - He's an all star and is having a solid season.  I think you'll see him turn it up in the playoffs and you are already seeing it in April while he's averaging 25 and 10.  His ability is clear and it's been the Hornets injury woes, not his play that has hurt them this year.  If Chandler can come back and take even more pressure off of him whatever team that faces the Hornets could be in big trouble.
Edge: Hornets

Center
Yao - Just thank goodness that he is playing, I'm not going to jinx it by saying anything else
vs.
Ely - You sir have been warned
Edge: Rockets


My Prediction: The Rockets take this one late.  They don't have anyone at all that can even pretend to guard Yao with Chandler out and the Rockets beat them in New Orleans (with yours truly in attendance) without Yao suiting up.  The Rockets match up well with New Orleans and this could be a playoff match up for them.  It's time to put as much doubt in the Hornets' heads as possible.