The recap is back, folks.  We'll get to Sean Marks in a minute.  But first:

Take tonight, for instance.  I was sitting in the nosebleeds - section 401, row 6.  Not sure how many times I yelled "TAKE YAO OUT!", but for the better part of the fourth quarter, it's all I said.  We're up 20 points, and yet Yao Ming, fresh off of some worrisome foot soreness, is still in.  What was Ricky thinking?  Did it really matter that much if Yao beat up Sean Marks?  I'd give anything to be able to text Rick in the middle of a game and just say, "Yao out of game plz.  Kthxbai."

Anyway, that was the only problem I had with tonight's game.  That, and Ron Artest's 2-13 performance.  I can't remember exactly how many times Ron dribbled for 15 seconds, tried to drive through four people, and then score, but it began to get redundant.  Pretty soon, the people upstairs started playing the organ every time Ron would touch the ball up top, because you knew he would sit there and waste the possession away.  Might as well have some entertaining music!

For those of you who missed it, tonight's game featured something quite special.  About five minutes prior to tip-off, sources informed me that Sean Marks had decided to try to apply for next year's slam dunk contest.  He said that he would showcase his arsenal against the tallest center in the league, and figured that if he performed well, he would get a slot.  Here's what happened in what I have dubbed the "The Sean Marks Dunkathon":

Dunk 2: 1st quarter, 2:11 -- Chris Paul drives and dishes to Marks for a two hand slam.  Interesting idea to go with the same dunk twice in a row.  Maybe he thought the judges missed his first attempt.  He's going to have to provide variety at some point.  5/10

Dunk 4: 2nd quarter, 11:41 -- James Posey drives and dishes to Marks for a two hand slam.  Seriously?  This is what Sean Marks was planning to showcase?  This next dunk had better be huge.  2/10

Dunk 5: 3rd quarter, 4:52 -- Yao Ming blocks Sean Marks dunk attempt.  Marks pulled up from behind the block and literally tried to fly over Yao.  Sorry Sean, you're no Dominique.  0/10 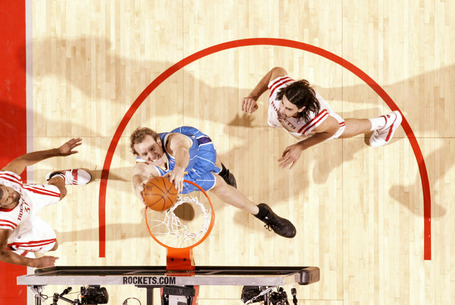 That's not going to get it done, Sean.  Maybe next year...

On a more serious note, tonight's win gets us one step closer to a division title and a #3 or #2 overall seed in the West.  Thankfully, Dallas came from behind to defeat the Timberwolves at home, which leaves the Jazz stuck in the 8 spot.  I'd much rather play Dallas than Utah, and would much rather watch Utah get crushed by the Lakers.  And after this game, I wouldn't at all mind playing the Hornets as well.  It's clear that they aren't in sync heading into postseason play, whereas the Rockets are on a 5 game winning streak.  While many people would rather play Portland, I'd like Portland to play L.A. in round two and have us play N.O. in round 1.  Everything will eventually work itself out, I hope.

Complete recap after the jump...

Yao Ming -- This spot was reserved for Yao before tip-off.  Melvin Ely and the aforementioned Marks against the Ming Dynasty?  Seriously?  It was clear that we were going to force the post game early, and that's exactly what happened.  Yao went to work, scoring 22 points on 8-13 shooting.  He also had two blocks and went 6-6 from the free throw line.  Solid game from a solid wall.

Baron Von Wafer -- The Baron had 13 points on 6-11 shooting.  I'm not really sure what else to say here, because the only thing Von does is score.  Um...haircut still looks wicked, man?

Carl Landry -- Carl went 10/7 in 22 minutes of playing time, and didn't miss a shot in the process.  He also played some great defense, as did Shane Battier, who could have gotten this slot as well.  But he didn't get shot in the leg, so sympathy points go to Landry.  Sorry, Shane.

Peja Stojakovic -- His Kings days are well behind him; he went 1/7 in this game.  And can someone explain to me how a 6'10 guy can only snag one rebound in 30 minutes of playing time?

Halftime Entertainment -- Tonight's halftime was nothing more than a bunch of kids dancing with some power dancers.  Bring Back Jazzercise!

Defense: The Rockets held Chris Paul to 9 points, which in turn stalled the rest of the Hornets offense.  New Orleans only scored 66 points, which is the lowest scoring output for a Rockets opponent this season.

Dunk of the Night:

Not Sean Marks.  Instead, it was Ron Artest, who threw down on Marks himself.  Payback's a bitch.

Entertainer of the Night:

Again, not Sean Marks.  This one goes to Luis Scola, who beautifully sang Gloria Gaynor's "I Will Survive" during a timeout.  Is there a more graceful man in America?

Next Game: Wednesday at Dallas.  Tonight's win was a nice way to close out our home schedule.  Now let's finish the regular season with a win in D-town.