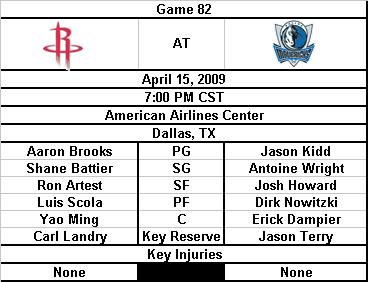 Point Guard
Brooks - Am I worried about this match-up for Aaron?  I'd be lying if I said I wasn't.  This one could play out over a 7 game series in a way Rockets fans aren't willing to admit yet.  Tonight is a huge step for him.  He needs to come out and prove that Jason Kidd is not fast enough to play with him.  He's had a good season series with the Mavericks and he needs to keep it up.  It's odd, but I'm strangely confident in him.
vs.
Kidd - Did you know that he is shooting 40% from the three point line?  Or that he is, shooting percentage wise, having a better than career average year?  He's also hovering around his career average of 9 assists a game.  No, he's not the same player he was, but he's 6'4 and physical.  He can get inside a defense and disrupt it.  The Rockets need to play the same defense they did on Chris Paul on Monday to keep him from influencing the game as much as possible.
Edge: Mavericks

Shooting Guard
Battier - Another big game, another Shane Battier solid shooting and excellent defense contribution.  He's not playing to the no stats all star role anymore, he's stepped beyond that to end the season.  The Rockets need Shane, he's extremely important to this team, and I for one am excited about the play offs even more because of the way Battier has been playing.
vs.
Wright - I get that they want Terry off the bench, and I think more teams should do something like that.  It's honestly one of the big reason I want Brooks off the bench, instant, unpressured offense.  Now Brooks isn't Terry but the idea is still the same.  Antoine isn't going to hurt them, but he's not really going to take a game over or give you much worry.  Now the Rockets have to take advantage of that every second that Howard and Terry aren't on the court together and make whichever one is out there with Wright pay.
Edge: Rockets

Small Forward
Artest - Yes he shoots too much, no that won't stop, but you know what he can never do too much of?  Play hard nosed defense, get big rebounds and beat up other players with his physicality.  I got asked the other day why I'm willing to live with his shooting mistakes, and wasn't McGrady's.  The reason is that he does every other thing on the court right.  If you make up for your mistakes on one end with the other, I can live with it.  And he more than makes up for them because he can toss in the great offense game every now and then too.
vs.
Howard - Howard ankle has been hurting him all season, and he sat out Monday's game in Minnesotta.  He's likely to play tonight and as per usual he is likely to have a good game against the Rockets.  It won't be because Artest and Battier aren't able to defend him, it's because his offense strength is to pull up and get points in transition.  He is just a unique player that can give anyone trouble.  I find it very odd that he is not scoring more points per game and put the Mavs slight drop off on his shoulders.  Let's hope he doens't decide to live up to his potential tonight.
Edge: Even

Power Forward
Scola - I'm going to slap around the next person that tells me Scola is a bad defender.  Look at the work he did on David West and then try and tell me that with a straight face.  From last year to this year he has improved 40% and that may be a conservative number.  There are players that give him trouble, but it's usually the way refs let those players play more than it is bad defense on Scola.  And I expect him to play hard tonight.  Dirk will still get his points, because he's Dirk, but look for how frustrated Scola makes him.  Also, it's important to get Scola in the flow on offense making Nowitzki play both ends.  That will be a key to this game.
vs.
Nowitzki - A great, great player.  I truly enjoy watching him play.  He's an underrated defender, though he isn't particularly good, he's solid there and his offensive game is just incredible to watch.  That said, I hope he has the coldest shooting night of his career tonight.
Edge: Mavericks

Injuries/Suspensions
Houston Rockets
OUT - None
Dallas Mavericks
OUT - None, though Josh Howard sat out Monday's game, everything I've seen has said he will play tonight.


My Prediction: The Rockets are the better team.  They match up well with the Mavericks but the starting lineup comes down to who wins the battle between Artest and Howard and who wins their match-up more, Yao or Dirk.  Don't let anyone fool you though, the Mavericks do have something to play for, a 6th seed is still up for grabs if San Antonio beats New Orleans tonight.  The games are being played at the same time so they won't have their hearts crushed just yet.  The Mavericks also know that if they lose it will quite possibly set up a 2 vs. 7 matchup with the Rockets if Portland beats Denver.  The Rockets are 3 point dogs tonight so Vegas doesn't have a lot of confidence either (yes I know they want to get equal action on each side and Vegas oddsmaker aren't biased).  I think Houston comes out wanting to prove a point.  Rockets win!