Recap: Rockets let big lead get away in Dallas, lose 95-84; Portland awaits in first round

Share All sharing options for: Recap: Rockets let big lead get away in Dallas, lose 95-84; Portland awaits in first round

Coaches always like for you to "want" something.  To motivate or inspire you, they always say things like, "You got to want it!" or "You've got to have the want-to in order to accomplish your goals."  And by all means, it's true.  Want implies heart, and where there is heart, there is a will, and where there is a will, there is intensity, and there is determination, etc.  But there is one word that does not simply go hand in hand with the rest.  It's execution.

Playoff teams not only exhibit the want-to, but they also match it with good execution.  If there is one time period in basketball to execute, it is in the fourth quarter.  Tonight, the Rockets did not execute in the fourth quarter, and the Dallas Mavericks did.  But it's not quite that simple, because poor execution in the fourth quarter is nothing new to the Rockets.  On this night, we were also out-hustled and out-manned.  You can choose to blame the refs if you want, but I don't see it that way.

Brandon Bass may have been mauling Yao at times, but it was such an intense game at that point that the referees chose to let it go.  Instead of trying to find an alternate route to get Yao the ball, we chose to A) Complain at the refs and forget about defense, and B) Jack up off-balance, ill-advised three pointers (Ron Artest).

Ryan Hollins spent about five minutes on the court.  I don't think I've ever hated anyone for five minutes as much as I hated Ryan Hollins.  But I also have to hand it to him.  He hustled his ass off, he went up strong to the basket every time he touched the ball in the paint, and he brought some much-needed intensity to his team.

But back to execution for a minute - if you want to find something to pin on Rick Adelman, it's his inability to execute at the end of the game.  My hat's off to Rick Carlisle.  In the midst of the Mavericks' run late in the game, Carlisle stayed poised and composed and found ways to get his best players the ball.  On the other hand, Adelman had no answer for Jason Terry.  Absolutely none.  We played great defense on Dirk in the fourth quarter, but he managed to hit a tough fadeaway jumper anyway.  I can live with that.  But the fact that Jason Terry was open for the majority of the quarter is inexcusable.  Rocket-killer or not, when you leave one of the league's streakiest and most talented shooters open, he's going to make the shots.  Same goes for Jason Kidd.  It wasn't like Kidd's 3 three-pointers were lucky; they were wide open, as in wide-enough-to-get-his-feet-set-check-the-clock-and-take-a-perfect-form-shot-open.  I'm convinced that we were hustling in the fourth, because I think we knew what was at stake at that point.  We couldn't afford to lose any ground in a two-point game.  So I blame Rick.  I blame him for not settling us on defense and finding an answer for Terry.  If you missed the game, this is what Jet did to us in the last five minutes, when it was a tie game:

It wasn't just our defensive letdowns that cost us the game.  Our offense was horrible.  Want to know what our offense was in the fourth?  It was Carl Landry.  And I'm not just saying that to be cute.  Landry was the only Rocket to make a basket in the fourth.  Check the play-by-play; it's true.  He made a layup, a jump shot, and then drove at Dirk to tie the game at 80 with another layup.  After that, we made four free throws to Dallas's 15 points.  Weak sauce.
The difference between our offense and Dallas's was that Dallas could get their best shooters open shots.  Normally, we can do the same, but it goes through Yao.  If we hit Yao on the block and he draws a double, we usually catch a pass up top, swing it to the corner, and hit the open three.  That's how we get open three pointers.  But Yao was being fronted, and suddenly we were forced to find other ways to get shots.  Artest resorted to dribbling on the three-point line before chucking up prayers.  Aaron Brooks missed a pull-up jumper just inside the arc.  In all of this, where was Shane Battier?  Doesn't he usually hit big shots for us?  Well, when there is no Yao, there is no defensive rotation necessary.  Therefore, there is no open Battier.  And when Shane isn't open for a quick catch-and-shoot, he won't be scoring the ball.
It's obvious that the fundamental flaw in our late-game execution is that our best player can be taken away so effortlessly.  Not to say that Brandon Bass wasn't trying hard when fronting Yao, but it's such a simple move to stop such a dominate player.  You look at other teams, and you see their perimeter players take over late.  There's LeBron, Kobe, D-Wade, Carmelo, Paul Pierce, Joe Johnson, Chris Paul, Deron Williams, etc.  We simply don't have that, whether we want to believe that Ron Artest can or not.  And when our next-best option, Yao, is taken away, then we lose our heads.  If we are going to beat Portland in round 1, I cannot stress enough how important it is that we fix this.  Luckily, I don't think Portland has anyone as strong and quick as Bass that will be able to front Yao late.  Pryzbilla and Oden are solid defenders, but they won't be able to get around Yao as easily as Bass could.  Still, it worries me that the Ming Dynasty can be shut down in this manner.
So now we play Portland.  Instead of Dallas or New Orleans.  And we don't have home court advantage.  Some brief thoughts before the rest of the recap:
Quick Recap:
Three Up -- Carl Landry, Yao Ming, Kyle Lowry
Three Down -- Luis Scola (his worst performance of the season), Ron Artest, Von Wafer
Stats of the Night -- Shooting %, 3-point %, assists, 4th quarter points.
Sentimental Statement -- It's a shame that such a great regular season came to an end with a punch in the gut.  But now we have to step up and deal with our loss and make up for it.  I can't wait for this series with Portland.
And on that note: 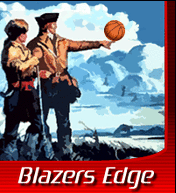 Welcome, folks of Blazer's Edge!  We hope you enjoy your stay at The Dream Shake, and we will collect your rental rates after we've won the series.  Thanks!