The most important player in the Rockets/Blazers series: Chuck Hayes

Share All sharing options for: The most important player in the Rockets/Blazers series: Chuck Hayes

We already know the stars of this series.  Yao Ming, Brandon Roy, Tracy McGrady Ron Artest, LaMarcus Aldridge, Luis Scola, etc. etc.  These guys have been studied and analyzed all season long.  There will be no surprises among them.  Sure, Brandon Roy and Yao might exchange big "game-winning" shots.  We already expect this though...

However, when the Rockets finish off the Blazers in Game 6, everyone will look back and say "I had no idea Chuck Hayes would be such a huge factor."  Okay, not everyone, because I'm saying it now... and I fully expect Chuck Hayes to be a central player in this series.

Yes, Mr. Hayes will be the unsung MVP of this series for the Rockets.

Look, I love Luis Scola, and he's going to give us 15/10 on average every game.  But he doesn't play 48 minutes a night.  Carl Landry still isn't 100% after that @$$hole shot him in the leg at 4am near his own house.   Joey Dorsey is busy learning how to spell "plantar fasciitis."  Chuck is going to be needed.  And he will deliver.

The Blazers go 10 deep.  They have lots of depth in the frontcourt.  From Aldridge to Frye to Rudy to Outlaw, the Blazers can run at the Rockets with waves of athletic swingmen.  The first time the teams played (yes, the "Brandon Roy shot" game), LMA was having a field day early against the Rockets' shorter power forwards.  Coach Sleepy finally woke up and put in Chuck Hayes to guard LMA.  Next thing you know... Aldridge became a complete non-factor in that game.  This was repeated in games 2 and 3 between the teams, most recently a couple weeks ago (nice -14 in the +/- for LaMarcus, while Chuck posted a +8).

Hayes may be all of 6'6" and have the worst offensive game in the NBA, but when it comes to defense, you do not want him guarding you.

The NBA pundits all over the TV this week raved about the Blazers' ability to create offense whenever they want.  They tossed out words like "efficient" and "athletic" and "deep"... and while they paid lip service to the Rockets' team defense, they tended to ignore how the Rockets can totally control a team if they are in the proper defensive mindset.  Just ask LeBron what it's like when the team really cares about defense.  Chuck Hayes isn't going to make any NBA "All Defensive" teams (basically because the voting for this is a joke, but I digress...)

Yes, I know these are Chuck Hayes' stats for the regular season:

Then again, if Shane Battier can be a "no stats all star" - why not Chuck?

Don't be surprised when you see Chuck Hayes on the floor for extended minutes while frustrating the Blazers to no end when Portland (temporarily) has possession.  Chuck Hayes' game may be ugly, but it is beautifully effective.  Yet another reason why Daryl Morey is a freakin' genius. 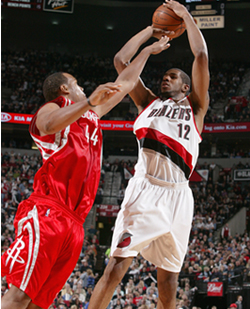 Chuck Hayes will be a huge factor.  Don't say I didn't warn you, Portland.