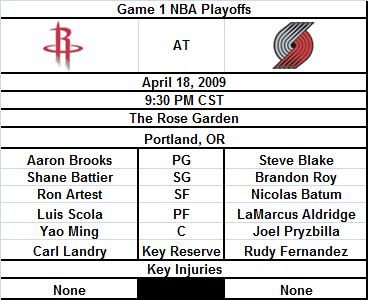 Point Guard
Brooks/Lowry - Contrary to internet reports, I do not think Kyle Lowry will be starting.  The reason is two fold 1) It's dumb to change your roster before the first game of the playoffs and 2) Aaron Brooks played at Oregon and he is going to be focuse beyond belief in this series.  He hasn't shown his full ability yet, but I think he's going to have a big game 1.  Lowry will come in to try and slow down Rodriguez and hopefully play rough defense on Blake.  The Rockets simply have to get more out of their point guards than they have this season.
vs.
Blake/Rodriguez - Steve Blake, at 29 is the old man of this bunch.  He's also the guy that keeps this teams head in games when they wander.  If there is a spot that the Rockets have to find a way to disrupt it is likely him more than any other.  If Blake is unable to keep the flow of the game going, the Trailblazers will falter.  There is no reason to doubt him though, as for 2 straight seasons he's done just that.  Rodriguez doesn't get big minutes, but the Spaniard has a ton of potential.  At 22 he is still learning the NBA game and has forced Bayless to the bench despite his high draft pick status.
Edge: Even - If Houston can find a way to have the superior PG play in every game this series will be over in 5.  Blake is very good, and I'd love to have him on the Rockets, but it's because of his steadiness, not his overwhelming stats.  Maybe I'm actually leaning to this being advantage Trailblazers, but I think Brooks hometown playing will even it out.

Shooting Guard
Battier/Wafer/Artest - While Battier is tall, and a true small forward, he plays shooting guard in the Rockets offense.  He's a good spot up shooter and is nearly unstoppable from the three point line when he doesn't have time to think, but just shoots.  His defense on Roy will ultimately decide this series.  Can he and Artest shut him down?  Make him take too many shots?  So far they have done the latter this year, forcing Roy to shoot 4 more shots and score more than a point less per game.  The trick will be holding him to 20 a game and convincing him he has to win it by himself. Wafer is a former Blazer that has finally made good in the league after being a highly touted player going into college and to some extent, coming out.  His athleticism will be one of things to look for.  When the Rockets need scoring from their second team, he's the guy that has to step up.
vs.
Roy/Fernandez- Brandon Roy, also known as my third favorite non-Rocket in the league.  He is just a phenomenal player.  And to the point above about convincing him to win it himself, that wasn't to say he can't, he really is that good.  It is to say that it's the best option out of the bag of crap the Rockets get to choose from with him.  I think his biggest value is at getting others involved and then lulling other teams to play off him a bit because of his passing.  Fernandez  is one of the X factors for the Trailblazers.  He's young, fun to watch and 6'6.  He's a very good shooter and does a lot of the little things to get the crowd into the game.  The Rose Garden is extra special when he's on the court, or at least it has been when I've watched.
Edge: Trailblazers

Small Forward
Artest/Battier - Artest is more small forward than shooting guard, but you will see him in both spots.  He's been a good to great three point shooter this year, but only when fading from the left side, or spotting up.  If he does anything but those two from behind the arc, it's not going in.  The Rockets have to have smarter play from a guy that isn't exactly an offensive mastermind.  His toughness gets him in trouble and I am begging to not see him try and take over a game on the offensive end, but instead take the open shots, get the ball to Yao and drive to the basket when it's there.  There is no way that happens for more than two games in a row though, so here's hoping those games go in the Rockets favor.
vs.
Batum/Outlaw - The Rockets drafted Batum, and effectively traded him for Artest after multiple moves by Daryl Morey.  Portland fans are absolutely in love with the young Frenchman, and it' s his defense that has been the most impressive.  If he gets into Ron's head the Rockets are going to have issues for long stretches.  His offensive game still has a long way to go, but he has flashes of something special and his shooting percentages are decent.  I'm not sure he's ready for the play-offs, but if he is, that's very good news for Portland fans.  Outlaw is the perfect bench player.  He can score and is an athletic force.  I think the only reason he isn't starting is because he fits so well with the bench team.
Edge: Rockets - The Rockets have to win this battle with smart play by Artest.

Power Forward
Scola/Landry/Hayes - Scola has started out strong versus the Blazers and then the Rockets have gone away from him on the offensive end.  When that happens, they have to either 1) Not do that because it's stupid (my choice) or 2) pull him out and put in Hayes or Landry.  He has to be the second option on offense, he just has to be, I can't say it any clearer than that.  When Landry is in the game, he will provide instant offense at the end of Lowry passes and put backs.  His shooting stroke has come a long way since last season and he has a dead on 17 footer from either side of the key.  Hayes is the Rockets designated defender.  He clearly frustrates
vs.
Aldridge/Frye - I have a confession to make, I'm a Texas alum and have a special place in my heart for LaMarcus Aldridge.  He made the right move coming out of school and has really taken his game up a notch this year.  His offensive skills are as good as any power forward in the league and is a very good offensive rebounder.  Unfortunately for Trailblazers fans, he  still has the same problem he had in college, physical play bothers him.  I'm not talking normal bumping him, he's fine with that.  I'm talking about Chuck Hayes type defense.  Defense where it is physical and jarring, but actually within the rules.  Stuff you can't just draw a foul with and stop.  Frye is a good player, but I don't think he is mentally tough.  He's also extra skinny and for some reason hasn't really put on weight.  He's a nice backup to have, but not someone you want to depend on.
Edge: Trailblazers,  though that is based on Aldridge.  Based on a whole, the Rockets are very close, much closer than most pundits would believe.  Houston has 2 legitimate starting forwards and one that is the best defensive power forward in the league.

Center
Yao/Hayes/Mutombo - Yao Ming is the best player that NBA referees have apparently never heard of (okay, that Dallas game is now out of my system).  He is going to have a breakout series against Portland where everyone will have to face facts that he is, and has been a phenomenal player.  It won't be easy, but Yao doesn't need it to be to succeed.  Hayes will get minutes at the 5, but he will likely guard the 4 spot when he does.  I truly hope that Mutombo plays 10-12 minutes a game and is there to wear down Aldridge and protect the basket while Yao gets a breather.
vs.
Pryzbilla/Oden - Most people think this should be a cake walk for Yao versus these two guys.  Here's the problem with that thinking : Pryzbilla is a fantastic defensive center.  He's frustrated Yao this year and isn't above tossing an elbow or pulling a jersey or an arm.  He's not dirty by any means, he's just a smart defensive player.
Edge: Rockets

Injuries/Suspensions
Houston Rockets
OUT - None
Portland Trailblazers
Game Time - Greg Oden was out for practice on Friday with a sinus infection.  I think he will play, but we'll see.


My Prediction: This is going to be a lot of fun, and a lot of craziness, and a lot of heartache for someone, it's also going to suck at stretches and be nerve wracking.  The NBA Playoffs, where hating the fact you are watching a game and are totally engrossed in a team is somehow actually fantastic!