From the opening tip, it was clear.  One team was ready for the playoffs, and the other team wasn't.

I'm not sure what Rick Adelman told his Rockets prior to tonight's game.  It probably would not have made much of a difference.  This group of players has been in the playoffs before.  They've lost in the playoffs before.  And they knew exactly how hard they needed to play to keep themselves from losing again.  But they didn't stop there.  Yao, Aaron Brooks, Luis Scola, and Ron Artest made sure this game wasn't even close.  Every little run that Portland made was answered by the Rockets.  What was most impressive to me was that Houston continued to build on it's lead throughout the entire game and never gave any ground.  It was a great all-around performance by a bunch of playoff vets and a midget point guard out for a kill.

We know what it's like to lose in late April.  Portland doesn't.  For the most part, they are all young, inexperienced, and just happy to be here.  But the Rockets?  They are sick of the first round.  For them, it's like having a third anniversary dinner with the in-laws.  In the past two years, they've looked forward to the first round.  Now they just want to spit their game and get the hell out.

Some scattered thoughts on our brilliant performance:

With all of that said, don't expect Game 2 to be an automatic win based off of tonight's performance.  This is not a Portland team that will roll over and die.  We need to come into Tuesday night with the same kind of intensity and determination that we exhibited tonight if we want to pick up a second road win.
More thoughts after the jump.

Three Up (that have yet to be mentioned in detail):

Ron Artest -- Ron's shot selection may have been stellar tonight, but his defense was superb.  Brandon Roy will score points, but as long as he misses a lot of shots in the process, it's all good.  Roy was hounded by Artest tonight.  But getting back to his offense, Artest had struggled in his last two games, and I was worried that it might carry over to tonight's contest.  Not so much; he was aware of his role on offense right from the start, and he made sure that the majority of the shots that he took were good shots.

Luis Scola -- I can't say enough about My Friend From Argentina's defense tonight.  He made Aldridge get physical down on the block and closed out hard of most of LaMarcus's jump shots.  His offense was there as well, as he had a nice tip-in towards the end of the game that caused Doris Burke to compliment him.  She'll be fined, no doubt.

Dikembe Mutombo -- Eighteen minutes of playing time from Deke off the bench?  Nine rebounds?  Two ferocious finger wags?  I know that sometimes prayers are answered, but this was totally unexpected.  Keep up the good work, big guy.  We're going to need it if Yao gets in foul trouble again.

Von Wafer -- He shot 1 for 6 and never looked comfortable.  Then again, this was his first time playing in the playoffs, so he gets a pass.

Shane Battier's Threes -- They didn't fall.  On a brighter note, Shane was fouled on a three point attempt and made all three free throws, so that has to count for something.

Carl Landry -- Five fouls in 11 minutes isn't acceptable for Carl.  He is going to have to stay on the floor given Yao's history of foul trouble in the postseason.

Dunk of the Night: 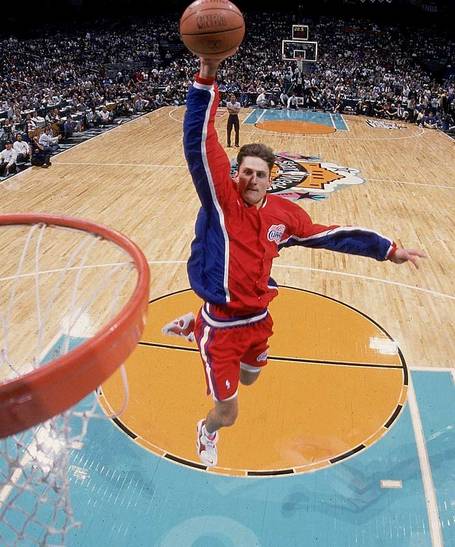 That should do the trick.

Next Game: Tuesday, 10 PM @ Portland.  We beat Dallas twice in their place a few years back - let's do it to the Blazers as well.

Some great thoughts from Dave over at Blazer's Edge.