Reasons to believe the Rockets can play even better in Game 2.

Share All sharing options for: Reasons to believe the Rockets can play even better in Game 2.

I've seen a lot of words tossed out this morning regarding the Rockets' Game 1 performance:

"overachieved" (mostly this is wishful thinking by Portland.)

"surprising" (It shouldn't be.  Aaron Brooks can and will play that well again.)

"these refs suck" (okay, that was just the chant in Portland last night.  Their anger is misplaced.)

"dominant" (this one I will agree with.)

"mistake" (this would be Joel Przybilla thinking he can guard Yao one-on-one.  Yao has already ruined this theory.  Thanks for making Yao angry, Joel.)

Game 1 is now over and the Rockets (and the Blazers) simply need to forget about it, make any necessary adjustments and move on.  Get ready for Game 2.

That said, there are many reasons to think that the Rockets can actually improve on last night's performance.  Contrary to what Richard Justice thinks, last night was far from perfect for the Rockets.  Consider this:

1.  Yao Ming picked up his 4th foul with 6:30 left in the third quarter last night.  Yao also picked up early fouls in the first and second quarters.  Yao was dominant AND in foul trouble.  Imagine the damage Yao can (and will) do when Brandon Roy's off-the-ball flops are not called as cheap fouls against Yao.  Yao playing 36 minutes will be better for the Rockets than Yao playing 24 minutes.

3.  The Rockets didn't even need the services of Chuck Hayes.  Chuck will be a factor in this series still.  Last night, however, Luis Scola took it as a personal responsibility to keep LMA away from the basket.  If Aldridge makes an adjustment, so will the Rockets.  Enter Mr. Hayes.  LaMarcus is going to have a rough night again.

4.  Carl Landry was a non-factor.  Five fouls, a missed layup and a missed 15-foot jump shot.  Landry is a MUCH better player than this.... gunshot wound or not.  Ask Utah how much of a game-changer Landry can be... or just watch the most recent "memorable moment" NBA playoff commercial.

5.  Von Wafer had a bad night.  He's kinda streaky.  We all know this.  But if/when ABZ has a rough game, you can best be sure that the Baron will be more than willing to pick up the offensive slack.  I cannot wait to see the exuberation from Wafer once he finishes his first rim-rattling dunk in the playoffs.  He's quite the excitable type. 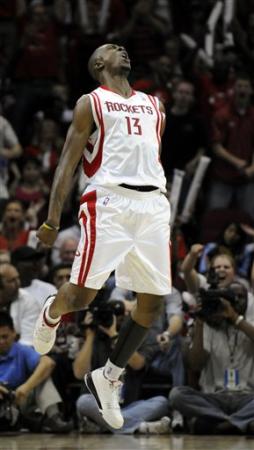 6.  Shane Battier was ice cold.  But for a 3 minute span in the third quarter, Battier was mostly absent from the Rockets' offense.  He finished 1-5 and did not make any of his trademark "corner 3s" in this game.  He even took a highly ill-advised three from about 28 feet when the Rockets were on a run.  I never knew Battier to be the type to try a "heat check" shot... in Game 2, he'll make those.

7.  Kyle Lowry wasn't needed.  Portland seems to think that if Aaron Brooks doesn't repeat his big Game 1 that they are okay.  What they seem to forget is that most of ABZ's points came when the game was already decided.  In a close game, Coach Sleepy can just put in Kyle Lowry to run a more efficient offense.  And Lowry is a bulldog on defense.  It's nice to have options.  It's even nicer when you can "save" those options for Game 2 and not completely show your hand.

9.  Brent Barry made only one shot.  Granted, it was a sweet dunk, but he's better known for his dagger 3s right now.  In a close game, Barry could be a calm veteran presence.  Or he could make a behind the back pass to no one in particular.  Either result wouldn't surprise me.

So, yes, Portland... the Houston Rockets can play better.  Much better.

To paraphrase what Joel Przybilla said about Yao before Game 1...