Share All sharing options for: Recap: Nash catches fire down the stretch as Suns defeat Rockets 114-109

You've heard of "hockey assists", where one assist leads to another (in hockey, the first of two passes that lead to a goal is also credited with an assist).  I'm going to one-up that by calling March 28th's game against the Los Angeles Clippers a Hockey Trap Game.  It wasn't a trap in the sense that we could lose to Los Angeles, but rather the events that took place against the Clippers led to a sub-par performance against the Phoenix Suns.  It's the Hockey Trap Game. Go ahead, drink it in.

Our defense against the Clippers was stout.  For some reason, we thought we could play with the same mediocre defensive intensity against an offensive juggernaut hellbent on winning tonight's game.  Wrong.  The Suns shot themselves out of a cannon and got off to a thunderous start, shooting 80% in the first quarter en route to scoring 33 points.  In the second quarter, they scored 34 points.  They also out-hustled the living crap out of us.  Evidence?  They out-rebounded us 24-10 in the first half.  Steve Nash already had a double-double with ten assists by the time the third quarter began.  And Grant Hill looked like a track star as he continuously beat us down the floor for easy layups.

And then we woke up.  For the sake of tradition, we played excellent third quarter defense and tied the game going into the fourth quarter.  The rest is, as Bill Worrell always says before tip-off, Houston Rockets basketball!  In other words, we lost our heads down the stretch.  Even Ben Golliver of Blazer's Edge listed it as a potential weakness for the Rockets heading into the playoffs, and I'm sure he doesn't catch many Rockets games.  We were impatient.  We didn't look to move the ball, but instead took pull-up jumpers.  We rushed shots that weren't even open.  And to top it off, Aaron Brooks drove at 6'9 Louis Amundson, who already had two blocks at that point, and threw up a ridiculous layup attempt that had zero chance of going in.  How can I possibly make this any clearer? 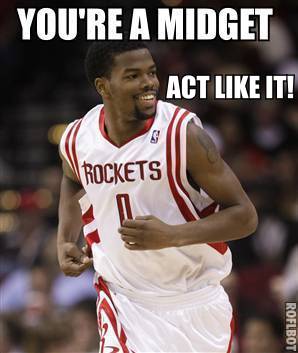 This was just annoying to watch.  Not even painful, just freakin annoying.

I'll give the Suns some credit.  They looked hungry for 48 minutes.  They played some great defense (despite giving up 109 points), most notably Shaquille O'Neal.  While Yao did have a solid game, Shaq was all over him.  He made Yao change his philosophy down low - Yao went from being aggressive to being passive, and it was all because of the Shaqtus.  That said, I thought Yao played very well tonight, aside from that horrendous turnover at the end.  Chad Pennington couldn't have thrown Nash a more accurate pass.  And speaking of the Canadian/South African/Whatever...

You know what's so damn good about Steve Nash?  He doesn't just pass to the teammates that are cutting where he can see them.  Rather, he is able to make the pass to players that aren't even within his vision.  He'll draw a double team, and without even looking, he will know where the open man is.  Immediately, he will jump or turn and make the pass, setting up the perfect three-point shot.  His ability to get rid of the ball so quickly allows the shooter more time to get set and knock down the shot before the defender can rotate up (I emphasize the Jared Dudley three in the fourth quarter).

Another thing to point out: we need that Carl Landry guy back.  Please.

Ron Artest -- He had one horrible posession in which he caught the ball and threw up a fadeaway shot when we needed to slow it down.  Otherwise, he had a great game scoring-wise, going 10-20 for 28 points.  He also went 4-4 from the free throw line.  It would have been nice to see him play better defense on Grant Hill, though.

Von Wafer -- The Baron was money, hitting 8 of 10 shots for 17 points in 18 minutes of work.  He also had a key layup down the stretch that, for the moment, kept us in the game.  Good work tonight, Von.

Luis Scola -- For once, I don't think this was a matter of Luis simply not getting the ball.  We looked for him on the post, and he couldn't get position against Barnes.  He rushed a quick shot down the stretch, and was clearly out of rhythm for the entire game.  We obviously need to emphasize getting the ball to Luis more often, and I know we wanted to take advantage of the Scola/Barnes match up, but if Luis can't get open, we can't feed it to him.

Aaron Brooks -- Nobody expected him to score 30 again.  But he could not guard Steve Nash, and worst of all, against the league's worst defensive point guard, he could only manage 9 points on 11 shots.  That's like Raymond Felton without the assists.

Not Grant Hill -- I like Grant Hill if only for the simple reason that he is still gunning it at age 36.  And he also went to Duke.  Grant had a great game tonight, and we did a poor job closing out on him.  He had too many open jumpers.  You know he's open when he's kicking his legs like Michael Phelps mid-shot.

From Jon Barry after Brent Barry hit a three pointer:

You don’t eat dinner if you don’t shoot in the Barry house.

Mark Jackson finally did it:

He took Andris Biedrins off of his "Top 3 Centers in the League List" and replaced him with Shaq.  Biedrins had previously been listed over Yao as the second best center in the league because "he got a buncha double-doubles in a row."  However, on this go-around, Yao got bumped up to the second slot, behind Dwight Howard.  In other words, Mark Jackson is garbage and I'm wasting my time by telling you that.

Next Game: Friday @ Los Angeles Lakers.  Two losses in a row would surely drop us down a few slots in the WC playoff standings.

See Bright Side of the Sun for analysis on Phoenix.