Crazy Pills is actually wearing *too much* flair...

Share All sharing options for: Crazy Pills is actually wearing *too much* flair...

[scene:  Ron Artest's locker.  Rick Adelman walks by to "have a little chat"] 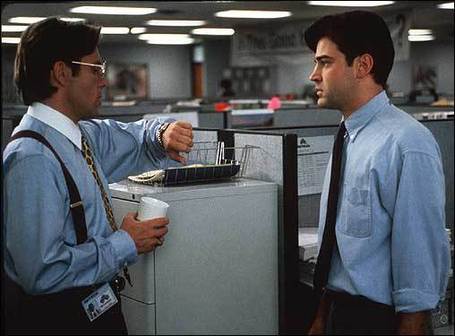 Crazy Pills:  'sup coach?  You coming over to play poker with us tonight?

Adelman:  No.... I'm going to see an occupational hypnotherapist to figure out why I keep falling asleep during games... I think it might help.  This guy helped my son get off drugs.

Artest:  But... isn't your son just a drunk instead now?

Adelman:  I know!  The guy's really good.  Actually, the reason I came by was to see if you got the memo.  It seems you've been having some problems with your shooting.  Namely your decision to shoot too much and not pass the ball to Yao.  So, is there a problem here we need to 'have a little chat' about?

Artest:  Oh.  Yeah, I got the memo.  I already handled that.  And the next game isn't until Friday anyway.  I already told Yao I was sorry so -- there's no problem here.  Everything's fine!

Adelman:  Greeeat!  I'll make sure you get another copy of that memo though.  Okay?  Thanks! 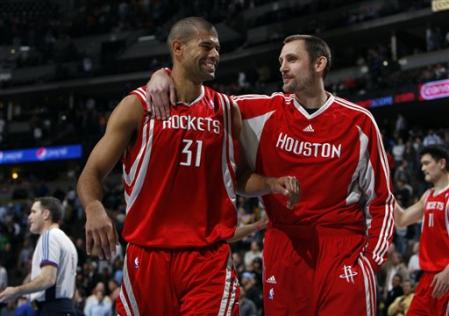 Shane Battier:  Yeah, what's this I hear you've been having problems with your shot selection?  Didn't you get the memo?

Artest:  Stop calling me "G" white boy.  And yeah, I got the memo.  Say, you guys wanna get outta here, maybe go get some coffee?  I'm trying to reign in the "Crazy Pills" but I think I'm gonna lose it.

Tracy McGrady:  [from completely out of nowhere]  Sounds like someone's got a Case of the Kobes!

Artest:  F-U!  Where were you last time we played L.A., Tracy?  That's right... reading Vogue magazine in the locker room! 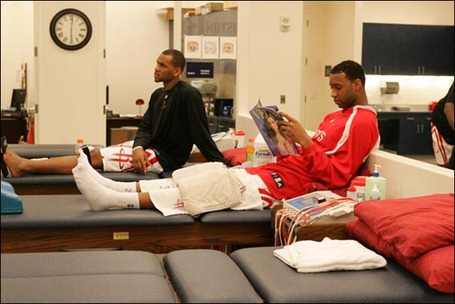 [McGrady scowls and hobbles away... then disappears into thin air]

Barry:  [to Artest] Sure thing, dawg!  Let's go get some coffee... I need to check e-mail anyway!  And don't worry about the memo, RonRon - in my family you don't get to eat dinner unless you shoot the ball!

Battier:  Come on guys, let's be reasonable.  And isn't it kinda early?  I mean, we haven't even shot free throws yet today.  I don't want to miss that.  And don't you have a meeting with Daryl Morey later, Ronald?

Artest:  Fine.  Whatever... I guess I'll go back to listening to my CD at a reasonable volume.  Tru Warier records, b*tches! 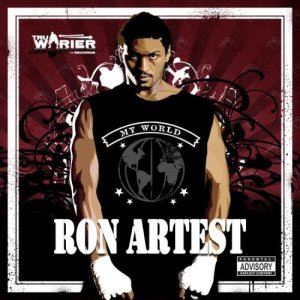 Daryl Morey:  Come on in, Artest!

Morey:  Well, Ron, what we're actually trying to do here is, we're trying to get a feel for how people spend their day at the gym... so, if you would, would you walk us through a typical day, for you?

Artest:  Well, I usually come in a bit late after spending time with my dog.  PETA's all over my @$$ these days, you see.  Then I usually walk in the door behind Yao, cause's he's like eight feet tall and that way Adelman can't see me.  Before the game I usually just stare intently into my locker for about an hour.  I do that during halftime, too.  It looks like I'm mentally focusing, but I'm usually just thinking about my lyrics.  Then I go play.  I'd say in a given game I take about 20 shots on average.

Morey:  Ahh, yes, you see, that's what I wanted to talk about.  Ron, if I may be frank, you strike me as someone with upper management potential, but lately you haven't been much of a straight shooter.  Did you get the memo?

Morey:  Excellent!  So, you'll pass the ball and stop taking so many off-balance shots after dribbling for 20 seconds?

Artest:  Whoa... slow down there professor.  I just fixed the glitch.  So, I won't be missing shots anymore.  The problem is all solved on this end!  Just give me the ball.  I'm ready to bust Kobe up.

Morey:  Ron, from now on - when you have the ball in your hands, I want you to ask yourself a simple question: 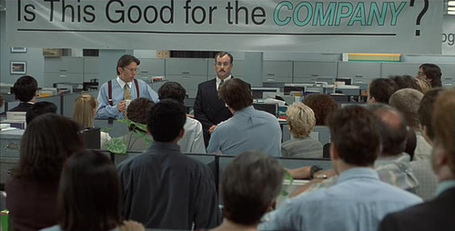 Morey:  Now Ron, for us to win, we need you to not be greedy.  So let's pass the basketball around and make sure everyone gets a shot.

Artest:  But earlier, Tracy was taking all the shots and I didn't get a chance.  And I was told that...

Crazy Pills:  [muttering to himself]  ... I could set the Toyota Center on fire.