Adelman finishes second in Coach of the Year voting

Share All sharing options for: Adelman finishes second in Coach of the Year voting 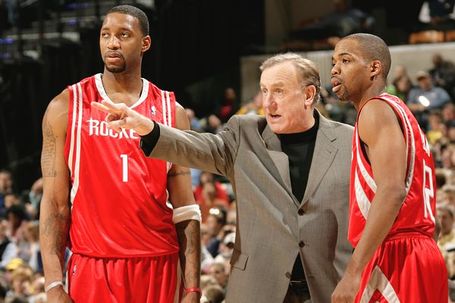 Apparently record is everything now.  And that was a bad joke.

Simply put, this award went to the coach with the best record.  The Cavaliers finished 66-16, and the Rockets clocked in at 53-29.  What puzzles me the most about the results is that the Cavs practically handed Brown all of the tools in the tool shed, while Adelman had to go looking for them by himself.

It's not a knock on Brown by any means.  He coached the Cavs to a fantastic season and did a great job rotating Mo Williams into his lineup.  Having LeBron James certainly makes a difference, but the acquisition of Williams finally enabled his team to reach elite status.  However, it's my belief that the best coach gets the very most out of his team that he possibly can should win the award, and while 66 wins is hard to argue against, the fact that Sleepy led the circus otherwise known as the Rockets to 53 wins is a more impressive accomplishment.

Think about what Rick went through this season.  First off, he gets the news from Daryl Morey that the Rockets have just acquired Ron Artest.  While news like that may excite fans, it probably mixed up Adelman's rotations quite a bit.  From an outsider's perspective, adding another star to a star-studded team should be a no-brainer.  But in reality, it makes life on the coach extremely difficult because he has to find a way to keep everybody happy.  NBA coaches often imply that they are not babysitters, but let's face it; if they are the ones deciding playing time, and if all of the stars need X amount of playing time to be happy, then yes, in addition to coaching basketball, Adelman is babysitting.

So just as Rick has worked Ron into his rotations, Shane Battier goes down with an injury.  Then Artest hurts his ankle.  Then T-Mac comes in one day complaining about another case of Vaginitis.  Amidst all of this is the "Rafer vs. Aaron Brooks" debate, as well as the decision regarding how much less of the court Chuck Hayes should see in the attempt to further develop Carl Landry.

But even during his Winter hibernation period, Sleepy works to try to make things right.  He tries to work with McGrady's schedule and game-plan for teams  simultaneously.  Houston loses some ugly games, Alston starts speaking his mind, and then, finally, McGrady calls it quits.  Alas, Sleepy's rotations will finally be able to have some permanence.  That is, until Rafer Alston is traded.  Great, Adelman must be thinking.  More work to do.

Here we are in April, after winning our first playoff game.  At this point in the season, the Rockets are probably playing their best basketball, which is always somewhat of a goal when the season begins.  To get to this peak, Adelman had to go through all of the aforementioned road blocks, and I'm not sure if he could have done a better job.  He took all of the scattered talent that was still healthy on this roster and put them all in the right places to best benefit the team.  And you're not going to reward him for this?

Should I mention Houston's drubbing of Cleveland at home as well?  Probably not, because one game rarely decides an award anyway.  But I think it's clear that Rick Adelman went one step above Brown and got everything out of his roster that he could have and then some.  If, at the beginning of the season, I had brought up all of the problems that we encountered thus far and told you we would win 53 games, you would call me crazy and ship me off to Utah.

But Adelman made it all work.  And for that he deserves the most credit possible.  How about an NBA Championship?