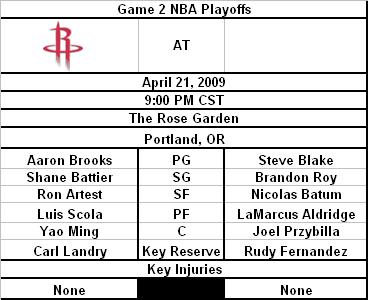 Point Guard
Brooks/Lowry - When I said that Brooks could step his game up, I certainly didn't expect 27, 7 and 4.  I was thinking 18 and 5, but I'll take all of it.  I wouldn't expect him to have such a spectacular game again, but in all reality, none of Portland's point guards can keep up with his speed, so if his three point shot isn't falling, he can just continue to drive to the basket and get Yao, Scola or Landry to clean up if his shot isn't falling as well.  Kyle Lowry had a respectable game, if not stat filled, he played well and his defense was solid.  I expect Brooks to fall back down a bit and Lowry to step his game up.
vs.
Blake/Rodriguez - Blake and Rodriguez were completely ineffective.  Some of that was defense by Lowry, some of that was reeling from Brooks' offensive explosion.  I think Blake will step his game up and not what the Rockets do on the offensive end affect what he does on the offensive end.  He's a much better player than he looked like in game 1 and a bounce back is inevitable.  If he doesn't, Portland will not win Game 2.
Edge: Rockets - This was evident on Saturday night.  I'm not sure it's as big of a gap as it looked Sunday morning in the box score, but it is an edge to the Rockets.

Shooting Guard
Battier/Wafer/Artest - News out of the Rockets camp is Battier was in the hospital prior to the game and was getting by on adrenaline.  He's recovered now and 1-5 is less likely to happen.  He was a solid 5-5 from the free throw line and had 5 rebounds to go with 2 assists and a steal.  As usual, it was his defense that made the difference.  Brandon Roy was not the same player he was after Battier switched to him instead of Artest.  This is the premier match-up defensively and Battier should be the one guarding him.  Von Wafer had a rough game, which is somewhat surprising.  He has absolutely scorched teams that gave up on him this season.  He should bounce back as Roy nor Fernandez is likely to focus their defense on him while matched up.
vs.
Roy/Fernandez- I'm going to be as clear as I can be about this Portland fans.  Brandon Roy is a man; he's a great player and was the only player that showed up.  Artest can't guard him, and that makes all of 2 players in the league (Kobe) that this is true about. That said, he was not fouled early in the game, you are delusional.  He was getting absolutely wide open lanes and making lay-ups early.  He went away from it because the game was lost, not because he wasn't getting foul calls, you are wrong; I'm just going to leave it at that.  I think Fernandez will have a bounce back game and will score whenever he is matched against Wafer (I expect Von to return the favor).  Rudy is a better player than he showed in game 1.
Edge: Trailblazers - This is Roy's advantage; he's just a fantastic player.  Yes, I'm freaking bitter the Rockets don't have him, it was THIS close in that draft

Small Forward
Artest/Battier - I said before game one that Artest is more of a small forward than a SG, and I really mean that more from the defensive end.  It was evident when Brandon Roy was running him off picks for the entire first quarter and going untouched to the basket.  Battier needs to guard him, it's as simple as that.  However, Artest can provide help on Roy, especially out top and deep in the lane.  Given that information, Batum and Outlaw are in big trouble as Artest will be forced to take his defense out on them. On the offensive end, Ron was measured and dominant.  I can only pray that he will have a similar game.
vs.
Batum/Outlaw - If Ron Ron is on these two guys, the Blazers could be in trouble as both of them are X factors for Portland.  If both of these guys have good games tonight the Trailblazers are likely to win.  Both had borderline awful games on Saturday night, I think one will play a lot better but the Rockets must stop them both from contributing.
Edge: Rockets

Power Forward
Scola/Landry/Hayes - I'd say the world finally sees Luis Scola for how awesome he is, but this series is on so late that I doubt it's true.  Scola is a mismatch for most players on the offensive end, and Aldridge is at a disadvantage there.  It's his defense that hasn't always been great.  The Trailblazers played directly into his hands in game one and he absolutely dominated defensively.  Let's put it this way, I expected 15 minutes from Chuck Hayes and he played 2.  Scola didn't need the help.  Even Carl Landry only played 12 minutes.  Now, I don't think Portland will be that silly with their offensive plan for Aldridge again, and Landry and Hayes are likely to play more tonight, but that doesn't change how great of a game Scola had.
vs.
Aldridge/Frye - Scola played physically with Aldridge, and it mentally frustrated him.  He's had a lot less of those moments this year than he has previously, and he seems to bounce back well this season afterwards.  I expect them to run him off some screens to get some shots.  If they are posting him up or giving him the ball with a player on his back, then the Trailblazers didn't learn their lesson.  McMillan is smarter than that and the change will happen.
Edge: Trailblazers - Aldridge SHOULD bounce back.  As I said in game one, this is closer to even than a lot of people will admit, well, maybe more will after game one.

Center
Yao/Hayes/Mutombo - Holy crap, the referees actually saw Yao on Saturday night (I know, 7'6 is hard to miss, but they usually do).  I'm extremely excited and scared about that happening as it's likely not to happen again.  I mean, they didn't even call any of Przybilla's flops (though they did call a terrible block when it was a charge by Fernandez and a flop by Roy on him).  I'm not complaining I promise, it was awesome.  If Yao starts out shooting more than 60% from the field for the first half, Blazers fans need to get very, very worried.  Can he beat the front that is inevitable?  I think the answer is yes, as the four times the Trailblazers tried it, he absolutely demolished it.  Mostly it will depend on what the refs allow Przybilla to get away with while doing it.
vs.
Przybilla/Oden - Joel P wanted Yao 1 on 1 and got him.  It did not work well.  Well, it did for Rockets fans, but you know what I mean.  He's going to front Yao, and he's going to flop, so we'll see how the game is called.  If it's tight, he's going to foul out in the first half.  If it's loose, the Blazers will likely win this game.
Edge: Rockets

Injuries/Suspensions
Houston Rockets
OUT - None
Portland Trailblazers
OUT - None


My Prediction: This is going to be a lot of fun, and a lot of craziness, and a lot of heartache for someone, it's also going to suck at stretches and be nerve wracking.  The NBA Playoffs, where hating the fact you are watching a game and are totally engrossed in a team is somehow actually fantastic! - (Just going to leave this, worked out well last game)