Expectations for Game 2 between the Rockets and Blazers

Share All sharing options for: Expectations for Game 2 between the Rockets and Blazers

Game 1 was a long time ago.  Since I've never been to Portland, it might as well have been in a galaxy far, far away.  Game 2 is tonight.  I hope the Force remains strong with the Rockets and that the Empire Blazers do not strike back. 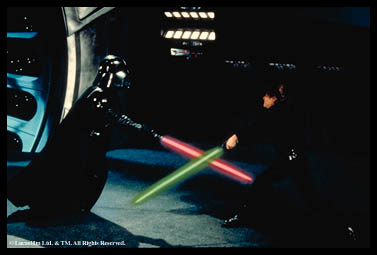 And for that matter... no one on the Rockets better lose a f--king hand.  (I'm looking at you, Yao!)  Or get injured in any way.  Keith Jones doesn't have healing powers that work as quickly as the rebel droids apparently do.

All that said... yeah, I have some thoughts going into Game 2.

First, no matter what the result is tonight... win or lose... the Rockets have already accomplished what they needed to do when they landed in Portland a few days ago.  They stole a game on the road.  Yes, it was in convincing (read: awesome!) fashion, but that's beside the point... the Rockets merely needed one win in Portland.  Just one.

So, just in case the Blazers win by 10 (or more) tonight... there will be no whining or "the sky is falling" reaction from me tonight.  Certainly not about the referees.  Unless Yao loses the aforementioned hand.  Or if the Rockets truly do look like @$$ in the game.  [Hey, I'm a lawyer, I gotta leave myself a few loopholes.]

Enough of a preface... here are some things to look for:

Yao will not be perfect tonight.  Yeah, he's human.  I think.

LMA will not be rendered impotent on the offensive end again.  As good as Scola is, he's not going to keep Aldridge from having a bigger impact tonight.  Look for Portland to run more pick-and-rolls with Roy and LaMarcus tonight.  This way they get Yao or Scola out of position trying to double... which leads to potential foul trouble (and foul trouble is truly the only reason the Rockets should ever lose in this series... a byproduct of their aggressive defense).

The Blazers will make more than one three-point shot tonight.  This may seem trivial, but if Portland goes on a long-range bombing run, their fans are going to go ape-s--t crazy and this will increase the Blazers' energy on the court exponentially.

The Blazers will make a "big" run at some point.  That means the Rockets won't have the lead the entire game this time around.  This is okay.  At some point the Rockets will have to fight back from a double-digit deficit to win the series (and future series).  It's as good an opportunity as any to see how they will respond to adversity.  Time to build the heart of a champion.

Kyle Lowry will make up the difference when ABZ falls slightly back to Earth.

I will have at least one reason to call Adelman "Sleepy".

Ron Artest will probably revert to being "bad Ron" if the Rockets face a deficit and the offense slows down.  Artest was very conscious about not taking bad shots in Game 1.  I'm not so sure how disciplined he is to maintain this attitude for two games in a row.  Let's just say I'm hoping... but not expecting.

Someone [*cough*Przybilla*cough*] will flop and draw a cheap foul on Yao.  Maybe two.  By now I see this as standard operating procedure for our opponents.  It doesn't make me any less annoyed when the referees take the bait.  Even when I expect it, I have a hard time accepting it.

Carl Landry and Chuck Hayes will be the difference makers tonight.  Unless Von Wafer comes in and starts 5-5 from the field.  If that happens, someone on the Blazers' bench will be heard to say "I have a bad feeling about this."  Then I'll be very, very happy.

The Rockets starters dominated Game 1.  Tonight I think our bench plays a bigger role in the outcome (good or bad).

I guess this is all leading up to my prediction for the game...

I think the Blazers win a close one.  Something like 95-90.  I also think that the teams will protect their homecourt from here on out, which is consistent with my "Rockets in 6" prediction way back on Friday.  Which means that the Rockets will come back to town angry... and will hopefully take it out on Darth Vader Brandon Roy and his minions this Friday.

(of course, if the Rockets win tonight... forget everything I said in the previous paragraph.)

I will probably be at the Toyota Center tonight for the viewing party.  I'll be the tall guy in a Luis Scola #4 jersey. 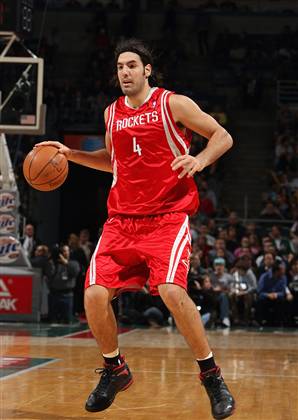 No, the other tall guy in a Scola jersey.